NEW YORK CITY – Performing in full crash test dummy attire in the shadow of several vintage BMW and Mercedes Benz vehicles suspended over the stage, A$AP Rocky fully embraced the theme and vibe of his latest record, Testing, on his recent Injured Generation Tour. The A$AP Mob member’s first major North American road trip in more than three years, the 18-date arena trek carried a pair of DiGiCo mixing consoles—an SD12 at FOH and SD10 in monitor world—supplied by Cleveland-based sound reinforcement provider Eighth Day Sound. The two desks were specified by FOH Engineer Brandon Blackwell and Monitor Engineer Moshe Davenport, both of whom are diehard fans of the SD-Range.

“I love anything and everything DiGiCo,” enthuses Blackwell, who has worked with the Harlem hip-hop star and the rest of the A$AP Mob collective since 2015, as well as other top artists like Camila Cabello, Big Sean and Puff Daddy. “The SD software and workflow fits how I mix, and they are definitely my preferred desks of choice for many reasons. The customization options that are available are impressive. From the SD7 to the SD11, I can set up my fader banks to fit whatever mixing situation I am in, be that FOH, monitors, or even doing both from one desk. And, of course, DiGiCo’s SD consoles sound great right out the box.

For this run, I chose the SD12 because I needed extra MADI ports and the DMI option cards got me the extra digital ins and outs I needed.”
The SD12 and SD10 were paired with two SD-Racks all on a fiber loop, and the first 48 inputs of each rack were fed off an analog splitter with the last eight being separate. “Even though we didn’t need that many inputs, we were able to get up to 64 inputs between the two stage racks,” he notes. “Also on the fiber loop was a DiGiCo Orange Box, which handled the MADI I/O for my UAD Live Rack.”

One of the highlights for the engineers on this tour was the presence of DiGiCo’s new 32-bit Stadius Mic Pre-Amp modules. “I had them on the first 40 inputs of my SD-Rack and was tremendously impressed,” Blackwell continues. “I had heard them before on a few one-offs with my other clients but never got enough time to really take a listen. Because we were able to pick inputs from both stage racks, I was able to record and A/B the old and new cards, and the new Stadius ones sound phenomenal. There is more resolution, which in my opinion made the high end smoother by comparison. Rocky is extremely dynamic and the new Mic Pre-Amps handled the drastic level changes very well.”

On the other end of the fiber loop, Davenport was equally pleased with the new Mic Pre-Amps. “Those cards sound amazing!” he says. “They helped me deliver the best sound for IEMs. I noticed the difference right off, and so did Rocky. He said I put the sound of the studio in his ears.”

Even with Playboi Carti, Ski Mask the Slump God and Comethazine all on the bill as the tour’s rotating opening acts—plus A$AP Lou and A$AP Twelvyy to initially warm up the crowd—Davenport reports that his monitor setup was fairly “simple and straightforward,” he says. “I was able to have most of the openers use IEMs because we ran a clean stage—no wedges at all, just sidefill tops. I had seven stereo IEM mixes, one stereo sidefill mix, and a stereo cue mix. I customized my console so that I had all mics and tracks at my fingertips at any given moment and had the mixes right in front of me as well. That’s one of the things I love about DiGiCo consoles—the way you can set the desk up just how you want it.”

Although Blackwell has been strictly requesting DiGiCo desks for the past four years, Davenport is a relatively new convert to the brand, having only started using SD-Range desks in early 2018. “I took an SD10 out with blackbear when we opened up for Fall Out Boy last year and totally fell in love; from that moment on, it was all I wanted to use,” he shares. “And my artists can tell the difference, too. I used another well-known manufacturer’s console on the first show following that tour and blackbear said, ‘What’s wrong? My mix doesn’t sound right.’ After that, I got the green light to fight for the SD10 every time because he said it always made his ears happy.”

Making the engineers’ ears happy on the Injured Generation run was the SD12’s and SD10’s captive processing. “I really enjoy the onboard dynamic EQ and multi-band compression,” says Blackwell. “I don’t think any other console manufacturer has mastered its own onboard dynamics EQ like DiGiCo has. I also enjoy the onboard delays. They usually take care of my slap delays in my mixes. Overall, the combination of good audio source, good Mic Pre-Amps, and good digital and analog processing has made me a happy mixer.”

“I wanted to try not using any outboard gear for this tour,” Davenport chimes in. “I’ve used DiGiCos both with and without external processing before, and I knew I could surely deliver what I needed for Rocky without it on this run. The console’s internal processing and EQ is amazing.”
Blackwell notes that, like many of his tours in the past, he paired his SD console with a Waves SoundGrid setup: “This tour was my first one running Waves plug-ins external from the console and using a Mac Mini to handle the software and GUI. I really enjoy having Waves external from the console because it gives me back my master screen.”

And both engineers are quick to report that one of their favorite underrated features on DiGiCo consoles is the use of snapshots firing from timecode. “For a show like this, we sometimes go out of order, and having timecode means that I am always in the right snapshot,” he adds. “For this tour, I brought along my Rosendahl Mif4 to convert the Ableton playback rig’s LTC to the MTC input on my console. This has changed the way I mixed because I don’t have to worry about hitting ‘next’ and can keep my fingers on the key inputs.” Davenport concurs: “The snapshots were the best; they will be ‘a must’ moving forward when I’m on this console.”

“Of course, the continued support from everyone at DiGiCo—including Group One (DiGiCo’s US distributor)—is one of the main reasons why I will continue to spec DiGiCo consoles,” Blackwell concludes. “Whenever I’ve had an issue, which is rare, or just a question, there is always someone there to quickly help out, which is always appreciated. As expected, our SD desks performed great on this tour and we’re all smiles.”

“And we’re not the only ones that are smiling,” Davenport adds. “Rocky was super-pleased with the audio as well. He told me personally that this was the best-sounding tour of his career. The DiGiCo consoles were totally amazing on this run, and I’m glad that we got to use them.”

The DiGiCo consoles were totally amazing on this run, and I’m glad that we got to use them. 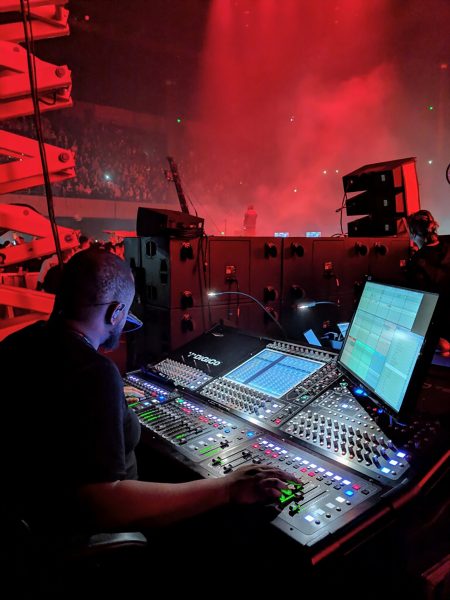 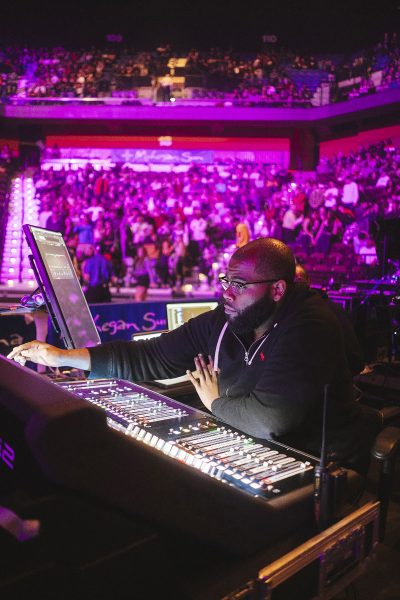 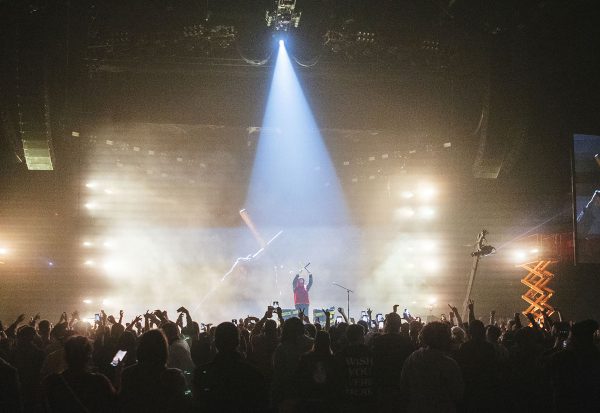