Worship AVL reports from the Peterborough centre of KingsGate Community Church which has taken delivery of its latest piece of equipment – a new DiGiCo Quantum 338.

This is the story of KingsGate Community Church, a multi-campus HOW with centres in Peterborough, Cambridge and Leicester. When Dave and Karen Smith left Oxford and moved to Peterborough in 1988, they looked to build a local church and held their first meeting with nine people in their living room. Over the next 18 years, as the church grew, they rented various venues across the city. Then, in 2006, the decision was made to buy land on the outskirts of Peterborough and build a £7.2 million purpose-built facility.

Pete Charlton moved to Peterborough in late 1990 while working for B&H Sound Services and became part of KingsGate when the services were being held in a small community centre. With a keen interest in all things AV, he was recruited by KingsGate as technical manager in 1995 but remained on the board at B&H for many years to come, maintaining a relationship with his former employer that would significantly help the technical development of the church in the years ahead.

In 2008, Charlton was joined by another former B&H employee, Matt Mills, as KingsGate’s production manager. Simon Benn completes the team as the church’s head of worship. “Having bought 12 acres of land, we spent ages trying to work out how big to make the auditorium,” explains Charlton. “If we’d built an auditorium for 5,000 worshippers, then we wouldn’t have had any space for our youth ministry.” After travelling to various countries and houses of worship, including Hillsong in Sydney, to see how different worship spaces worked, project architect Tony Byrne, Brian Hillson from B&H Sound Services and Mark Murphy from acoustics specialist Vanguardia helped KingsGate design and build its new Peterborough base. Seating initially totalled around 700 but, within the first few years, climbed to 900 after the addition of tiered seating. Currently, there are 1,500 seats but there is the capacity to hold 1,800 people in the future.

“Barco was a big part of our first equipment,” adds Charlton. “We went with an MA Lighting desk, ETC dimmers and Meyer equipment – B&H has been a long-time user of Meyer speakers, so it was a logical step. We’ve had some great kit that has lasted us really well. The first thing we changed a couple of years ago was the screen and speakers because a good deal came up. The projectors also pushed us on the upgrade journey because we couldn’t get the lamps made for them anymore.”

DiGiCo has featured significantly in the church’s technical infrastructure from the beginning and an investment in D5 and D1 consoles back in 1996 has served the church well. “New equipment costs a lot of money but, if you make the right investment and you start to use the building more and more, you realise how important the quality of your equipment is,” says Charlton. “When the D1 and D5 hit the 10-year mark, we knew that we had to start thinking about an upgrade. It was a big project to undertake and for the senior leadership and the directors to take on board that again this was a serious investment. We wanted to increase the amount of channels we had – we sensed that this would be a good next step for us and would be useful at some point.”

“We knew that we wanted to go from two consoles to three,” continues Benn. “One of the big factors was that we were buying into a new series of desks – so we weren’t buying into an old frame or processor, but we were actually purchasing new technology that would last us another 10 years. Also, we wanted to have matching front of house and monitor consoles so that volunteers can just move between them and be familiar with everything about them. We knew that the console was going to help us really push forward – it’s a big step in transparency and the quality of the processing.”

The new Quantum 338 console was fitted in March this year, coinciding with the second UK lockdown. “It meant we didn’t have to transfer everything over in a five-day period,” explains Benn. “We took a couple of weeks and used the opportunity to rerun cables, move racks around and put everything where we wanted it. If we’d only had Sunday to Sunday, we would have done it completely differently.”

Aside from weekly services, the investment in the new equipment has helped promote KingsGate as a venue for conferences, meetings and award ceremonies. “Before the pandemic, we were doing one or two big conference events a month and so we had to factor this in when we purchased the new equipment,” continues Mills. “We needed to make sure our Sunday services weren’t affected – we needed enough inputs and outputs so that we didn’t have to repatch everything after each event.”

The pandemic has also resulted in KingsGate extending its video inventory. Very quickly in March last year the church created a space in one of the side rooms with a TV studio feel and started recording worship sets, bringing in the main cameras from the auditorium. “That gave us a starting point for our services and we combined that with some prerecorded hosting and prerecorded preaching – and that has continued throughout the pandemic, just to give us a solid playout system,” adds Mills. “We purchased a bunch of equipment to give us a couple of extra camera channels and some different looks, styles and feels, and also some handheld cameras. We wanted to invest in the recording side of things to make sure the workflow is quite straightforward so we can do these things on a regular basis.”

Despite all the new equipment, Mills is still looking to the future. “We haven’t spent anything on lighting in the last 12 years apart from replacing a desk which was falling to pieces.  We have plans to purchase some lighting and bring that up in terms of quality and the effects we can achieve. We also want to add another Sony broadcast camera. We’ve got this amazing system in the auditorium, but we’ve had conversations about the ability to use the whole building in an integrated way. As we come out of Covid and everything starts to return to normal, we might want to do a mid- week stream from one of the smaller rooms rather than relying on the main auditorium – all of this new equipment will enable us to do things that 10 years ago we’d have thought were way out of our reach. The pandemic has highlighted the importance of video and how it connects people. The new equipment has helped us broaden our reach not just in Peterborough, Cambridge and Leicester but across the country.”

In 2010, a second KingsGate centre was launched in Cambridge, followed by a third centre in Leicester in 2014. “We all made a huge commitment to make Cambridge work,” continues Charlton. “At the start, we had lots of volunteers that would help in Peterborough in the morning and then jump in their cars and vans with the equipment and instruments and drive to Cambridge for an afternoon service. Cambridge was more of a geographic choice because it’s not too far away from Peterborough and there were already people who lived closer to Cambridge who were travelling to Peterborough on a Sunday. We chose to do Leicester in a slightly different way – it was more of a calling as we didn’t have an established group of people there. Acoustically, all three churches bring different challenges.” “We bought a couple of DiGiCo SD9s for Cambridge and Leicester when we started,” explains Mills. “We eventually retired those in favour of a couple of smaller desks – Cambridge was started 10 years ago and the SD9 was a good portable desk. Talking through different options, we came up with a way of using the newer SD9 from Leicester which was compatible with the latest software – it could have Waves and Optocore fitted – and in the end, we brought that to Peterborough to act as our broadcast desk.

There appears to be no end in sight for the growth that started in a small living room in Peterborough. Distance is no longer a barrier to worship. KingsGate is in the process of developing an online campus. “The new technology we’ve acquired has given us the chance to develop our online campus – without it, we wouldn’t be able to achieve what we have so far,” concludes Mills. “We’re always looking for these extra wins that we can get by spec’ing a new piece of equipment or putting in a couple of extra cable runs – we’re always trying to reach new people in new ways.”

We knew that we wanted to go from two consoles to three. One of the big factors was that we were buying into a new series of desks – so we weren’t buying into an old frame or processor, but we were actually purchasing new technology that would last us another 10 years. Also, we wanted to have matching front of house and monitor consoles so that volunteers can just move between them and be familiar with everything about them. We knew that the console was going to help us really push forward – it’s a big step in transparency and the quality of the processing. The new Quantum 338 console was fitted in March 2021! 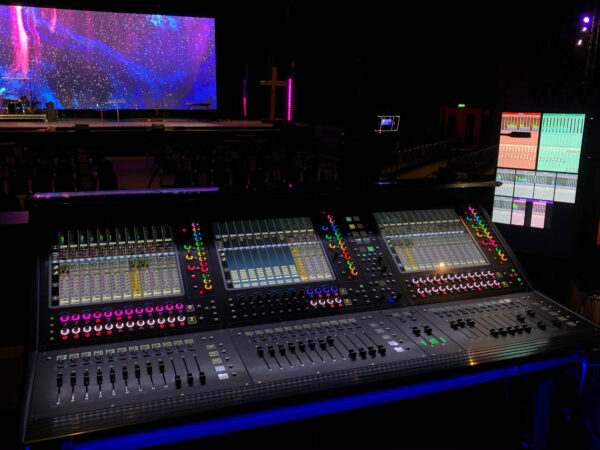 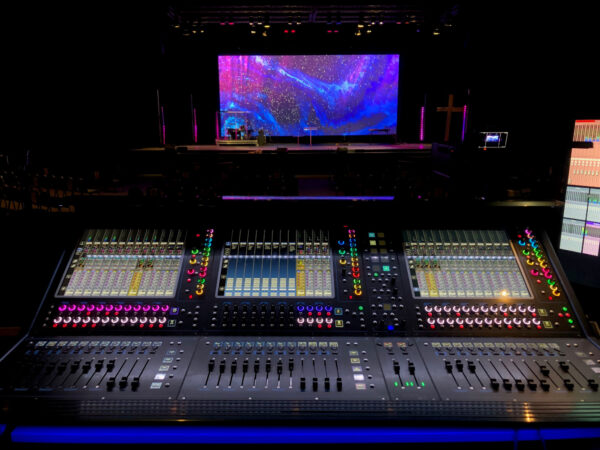 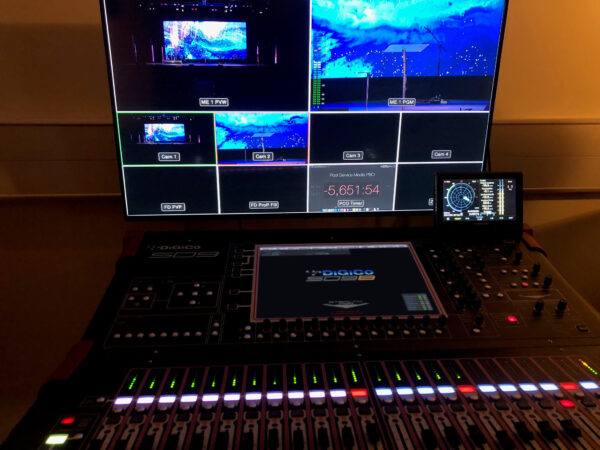 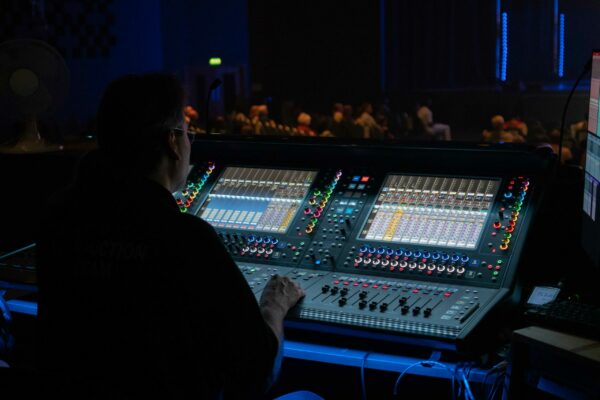 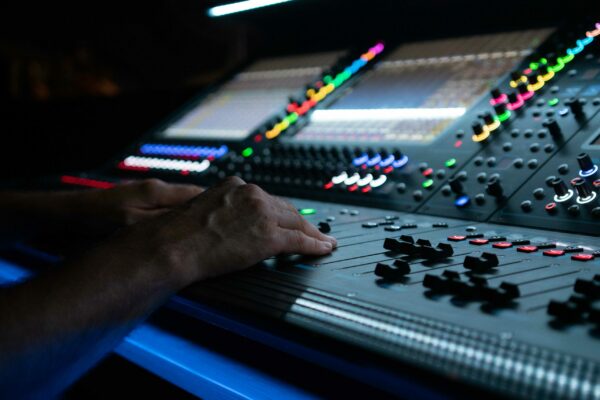 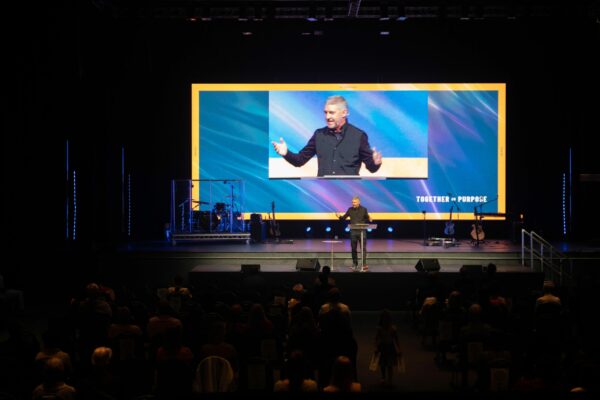 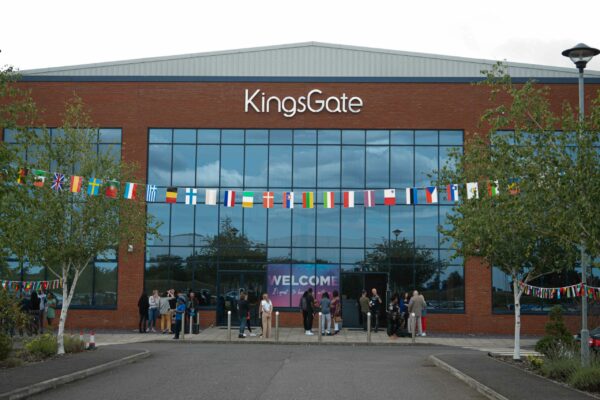