With India’s dramatic increase in music festivals, live acts, private shows, and grand weddings comes an increase in investment in audio technology, and an audio rental industry that has consequently become more dynamic in its equipment choices and its services. 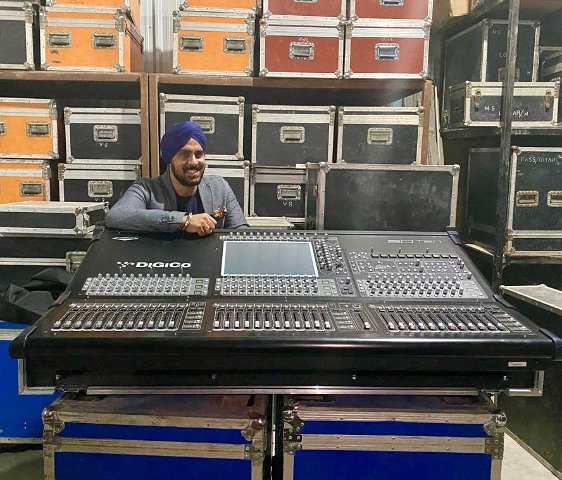 There are a number of the pioneers in the Indian rental market that have played a significant role in this evolution. Ahmedabad-based Mastersound is one of them. Launched in the 1950s and known as a trendsetter in North India, it has recently purchased a DiGiCo SD10 from the British manufacturer’s authorized India distributor, Hi-Tech Audio Systems.

“Gurnam Singh, founder of Mastersound, had a vision when he started the company in 1956,” says Mastersound’s current director, Tarandeep Singh. “He didn’t want to compromise on its audio system’s quality and always aimed to provide the best solutions to his clients.”

From India’s first Prime Minister, Jawaharlal Nehru, to George Harrison, sitar maestro Ravi Shankar and Lata Mangeshkar, Mastersound has worked with some of the world’s most iconic acts. Being the third-generation torchbearer for the company, Tarandeep Singh has made sure he can carry on Mastersound’s legacy with the same promise of quality as his father and his grandfather. The purchase of the SD10 fits with this ethos.

“DiGiCo’s SD10 is in high-demand among both mixing engineers and artists,” Singh continues. “It was time for us to upgrade our inventory and the first choice was DiGiCo. I was also confident with Hi-Tech Audio Systems’ support. The first show we did with the SD10 was for Bollywood’s popular singer Shaan in Lucknow. Tanay Gajjar, who was the FOH engineer, prefers DiGiCo and we were happy to provide him with the SD10.”`

“Mastersound’s SD10 curtain raiser show for Shaan went smoothly,” adds Hi-Tech Audio Systems application engineer for DiGiCo, Vanshaj Sharma. “Tanay Gajjar is India’s top engineer and has been travelling with Shaan for a long time now. He is an keen user of DiGiCo and loves the worksurface. The fact that DiGiCo worksurfaces are familiar across the range and engineers are comfortable to jump around different DiGiCo consoles is a huge bonus for us and makes the console a popular choice for rental companies who have to provide a user-friendly digital console.”

Akshay Rajput, Sales Manager for Hi-Tech Audio Systems confirms that the legacy of Mastersound is admired across India’s audio rental industry. “We are honoured and privileged to provide them with the SD10,” he says. “DiGiCo is an iconic brand that is admired globally. Our priority is always client after-sales support and we won’t compromise on that.”

“We are always delighted when our clients appreciate our efforts to represent DiGiCo in India,” concludes Rajan Gupta, Hi-Tech Audio Systems Managing Director. “We know that DiGiCo’s popularity is due to its continuous endeavour to innovate and upgrade its technology. We also know that Mastersound and DiGiCo are on a roll to make history in India.”

We know that DiGiCo’s popularity is due to its continuous endeavour to innovate and upgrade its technology. We also know that Mastersound and DiGiCo are on a roll to make history in India.