Beyonce And JAY-Z Go On The Run Again With DiGiCo

CLEVELAND, Ohio – September 2018 – OTRII marks the first world tour together in four years for music’s power couple, Beyoncé and JAY-Z. In that time, the music has become more complex and so has the stage show. The two stars are backed by a sizable combination of their individual bands, including an entire horn section, as well as backup vocalists and dancers, all of whom wear in-ear monitors, as well as wireless microphones for every vocalist.

All of these elements are connected via an Optocore HMA fiber loop between two DiGiCo SD7 consoles for the FOH mix (one primary console and a second for use by supporting acts on the tour) feeding a d&b audiotechnik J-Series PA system, while four more SD7 desks are assigned to the monitor mixes. In addition, another SD7 is on the tour to mix full-band rehearsals as set lists change and new songs or new arrangements are added (the duo’s hit album, Everything Is Love, dropped in the middle of the tour), and to mix and record writing sessions as inspiration strikes during this 48-city, four-month-long tour. A DiGiCo SD12 console is also on hand to mix vocal rehearsals in dressing rooms. The five primary consoles on the tour use five DiGiCo SD-Racks, with a sixth used as a support rack.

“The DiGiCos are the only consoles that can do this show,” observes Jason Kirschnick, International Operations Officer and Global Project Manager at Eighth Day Sound, the sound-reinforcement provider for On The Run II. “The wireless and in-ear counts are enormous. Stephen [Curtin, FOH engineer] uses a lot of subgroups to keep and manage all of the stage inputs on a single SD7, with the second SD7 on the same fiber loop and with the sessions loaded and ready there as a spare. No other desk could touch what the SD7s are doing here.”

“Everyone is sharing fiber on this tour,” Kirschnick continues. “That’s one of the reasons that it’s the preferred console for the FOH and monitor mixers: its work-surface flexibility makes it the only console that lets them set up the exact custom workflows they need. It just has more options than any other console. That’s why it’s number-one on all the riders.”

The SD7 consoles are connected to an Optocore fiber loop—a double loop in the case of the monitor consoles, two of which are primarily dedicated to the band members and two more for the artist on stage, with one for each task assigned as the primary console and a second as a spill-over deck for ancillary inputs such as talkback and audience mic inputs. Small wonder then that everyone—FOH engineer Stephen Curtin, artist monitor engineer James “Cowboy” Berry, and band monitors engineer Jimmy Corbin—has their hands full, with what Curtin estimates is 160 total inputs, down from 175 when the tour first took shape. “We were able to reduce the number of inputs slightly, which helps,” he says, “but it’s a high channel count, and the SD7s make all the difference.”

Even with such a massive number of sources coming in, versatile expansion options allow DiGiCo’s flagship console to comfortably stay on top of everything. “With the SD7 we were able to utilize a second HMA Optical Loop doubling the available I/O in the fiber network allowing us to add not one, but two additional record systems capable of handling all 160 channels plus an additional 16 audience mics,” says Curtin. “More important to us was the additional 504 inputs or outputs along with the 504 on Loop #1 to the system, which on this show is critical. That’s enabled me to be able to keep everything on just one primary console, which streamlines the workflow considerably.”

“We’ve been using the SD7 with Beyoncé since the desk came out; plus we were on DiGiCo’s D5 before that,” says Berry, who has been with Beyoncé for a dozen years now (Curtin joined Beyoncé’s crew in 2011 as the band monitor engineer, then transitioned to FOH when Corbin came onboard in 2013 for the Mrs. Carter Show world tour). “Even the monitor guy before me was on a DiGiCo; it’s the only desk that can handle the size and scope of her shows.”

And he’s not kidding. With practically both Beyoncé’s and JAY-Z’s full musical entourages in tow for On The Run II, the road logistics alone are absolutely staggering. It is a setup that can only visit the biggest of stadiums because “it definitely won’t fit anywhere else. But the SD7s can handle it all. When the SD7’s Quantum 7 processing update becomes officially available, we’ll technically be able to handle even bigger productions, but I’m not sure that we should tell them,” Berry laughs.

Currently, the Eighth Day Sound crew is running just over a hundred channels of wireless units, including comms, he notes: “I’m only driving 16 stereo outputs from my desk for vocals—plus a sidefill and wedge mix downstage just as a safety—but I think that Jimmy only has two outputs left on his desk, which means he’s well into 30 stereo mixes.”

Berry goes on to compliment DiGiCo’s “Ultimate Stadius” 32-bit Mic Pre-Amp cards, which are being used for the first time on all of the insert inputs, as well as a number of the company’s brand new 32-bit DAC modules: “One of our stage racks is completely full of outboard analog processors, so we’re taking everything D-to-A and back. The 32-bit cards give a really pleasing, warm, wide sound, and it was immediately noticeable, especially on keys and drums.

“What really adds to this setup—the way that I’m linking my two desks together—I’m using the Merge Input on the auxiliaries and groups, and we’re linking on MADI, so the second desk is actually feeding my first desk through the Merge feature. I haven’t done that in the past, and it’s making my setup so much easier—it’s just two MADI cables and we’re done, plus it gives redundancy. The desks are also MIDI-triggered to each other so that they all switch snapshots at the same time, so it’s all very seamless to operate.”

And the SD consoles are also the matrixes for recording the live shows, using DiGiCo’s MGB MADI interface at FOH and Optocore DD4MR network MADI interfaces in monitor world to convert the MADI output from the consoles to a network signal for input to a Mac Pro running recording software. “This is a very complex tour,” says Kirschnick, a commercial-rated Air Transport pilot who definitely understands complexity. “It couldn’t have been done as reliably or effectively without what the SD7 brings to it.”

It couldn’t have been done as reliably or effectively without what the SD7 brings to it. 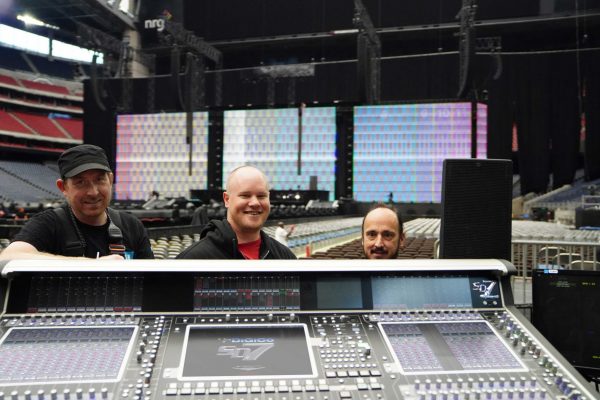 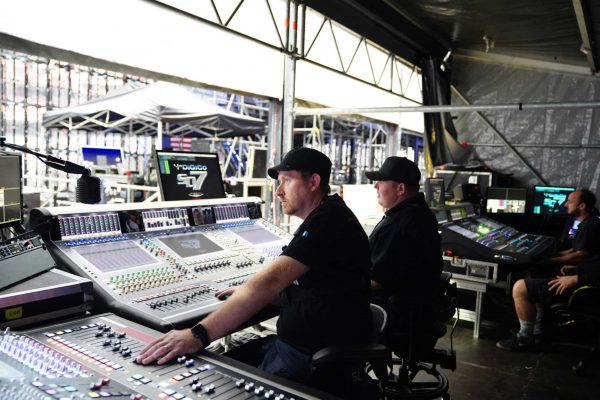 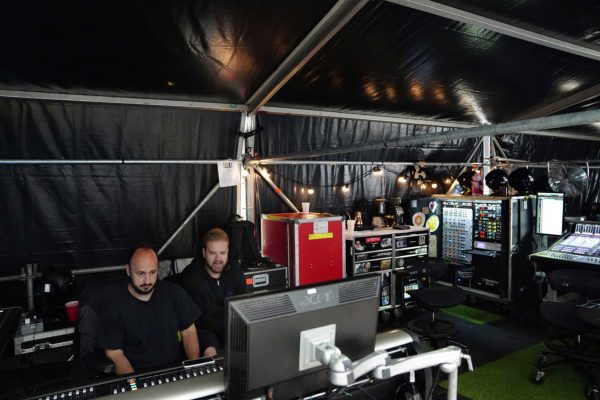