For Global Kingdom, the mid-pandemic upgrade to their audio systems is all about staying ahead of the curve and expanding the reach of the message they preach. While Coronavirus restrictions hastened the Toronto-based church’s efforts to enhance their ministry, using cutting-edge technology to do just that has always been an important driver for the growth of their congregation.

Realising that during this challenging time, their ministry is more critical than ever for those who depend on their support, inspiration, and community, Global Kingdom pivoted according to the needs of the moment. Working closely with Apex Sound & Light and GerrAudio Distribution, they adopted a solution that serves the needs of today and tomorrow with the addition of a DiGiCo Q338 mixing console and KLANG immersive mixing platform.

As Tom Lodu, Manager of Operations & Special Events for Global Kingdom Ministries Inc. puts it: “This (effort) is not a band-aid. This is the level of quality we are implementing going forward, and we want to do it with excellence.”

That pursuit has been a constant for Global Kingdom since it was founded by Rev. Roy E. Upton in 1956. Then, services were held in a variety of decidedly impromptu spaces ranging from parking lots to bowling alleys. Since those humble beginnings, Global Kingdom has grown substantially and now operates out of a facility able to host an on-site congregation of nearly 2,000 on any given Sunday, and streams live services to 32 countries around the world.

Their global mission is about far more than adopting new audio solutions, however, Lodu adds, citing the addition of talented, younger members of the congregation to their production staff, such as Audio Director, Joshua Rambajue, who started attending Global Kingdom in 2012.

Rambajue, who began performing at the church as a musician before taking on his current role, explains that the scope of the musical component to their services ranges from basic setups with just a singer and a guitar to a full praise band featuring anywhere between three to eight vocalists. This latest upgrade, however, also supports a wide range of other musical activities. “What this allows us to do is to capture every Sunday meeting, not only for archival purposes but also for mix down and the posting ‘worship moments’ online, featuring performances with or without our congregation present. And that wouldn’t have been possible if we weren’t able to multi-track using the new system.”

Global Kingdom and Apex have had a lengthy relationship, says Liz Woods, Director of integration & Sales at Apex: “Since the mid-1990s we have supported Global Kingdom’s growth and helped them with any equipment and technical knowledge they require. They’re very forward-thinking and know a lot about audio equipment, and when we proposed the new DiGiCo Quantum system they expressed a lot of interest having been familiar with the launch of the new Quantum technology.”

“I bought my first Soundcraft console from Apex many years ago and they’ve always been incredibly supportive in helping us achieve our goals and providing us with clear information to make decisions,” Lodu notes. “So, after we began having issues over the last few years with our previous console, we decided to make a change and Apex was great about providing different options for Josh and his team to try out. Ultimately, we decided to go with the DiGiCo Q338 because, knowing where Josh and the production team want to go, we felt it would take us to the next level and feed that vision, not only for today but for the future.”

Having spent a significant number of years mixing FOH at the church, Lodu was immediately impressed with the DiGiCo Quantum board: “I love the workflow and flexibility and, of course, I love how it sounds.”

Rambajue agrees wholeheartedly: “It’s a major step up in terms of the user interface, too; even the screens are brighter and easier to see, and I can navigate around the console very quickly.” As for connectivity, he adds: “The ability to send audio upstairs to our broadcast/recording room via a single Cat5 cable is huge.”

DiGiCo’s Dante and DMI-KLANG cards were also motivators for the purchase, Rambajue says: “We wanted to make sure our new console would pair well with the Dante network we built earlier last year, and with the DiGiCo S21 we use to handle our broadcast mix.”

“When GerrAudio and Apex provided a demo console with KLANG integrated, it showed that, with just a little additional investment, we could set up a system that was very future-proof,” he continues.” And the immersive nature of KLANG opens up a lot of possibilities.”

Band Director Keegan Kalideen notes that his overall mix volume was lower than usual, and he did not have to crank everything to hear what he needed to hear, which meant less ear fatigue after two services. He also played differently, with the need to overcompensate to fill space removed as he had a better picture of what was happening in the band.

“I was concerned that using KLANG would be too much of a leap from what I was used, but the experience immediately overrode any such concerns from the time parameters were set,” adds Kalideen. “Just from my intuitive perception as a musician and composer, KLANG is in an entirely different category than ordinary IEMs; I can confidently say it felt like an in-ear experience. I’ve never been in a closed sonic environment and felt like I was ‘feeling’ actual floor monitors in the room; which completely transformed my musical engagement.

“The virtual modelling and simulation created a space in my mind where I felt like I couldn’t get out of ‘the zone’. I was literally anticipating a steep creative drop-off at various points, only to be surprised that every consequent note felt new and ‘inspiring’. And for the first time I was able to feel the intensity of the music without higher volume levels or custom moulds.

“I was ready to give up on IEMs. KLANG is the revolution in-ears needed.”

While the capabilities and flexibility the DiGiCo, KLANG, and other Dante equipment provided were key to Global Kingdom’s choice of the products, their long relationship with Apex, and the dedicated support Apex and GerrAudio typically provide were equally important considerations. “I can’t speak highly enough of both of them,” Rambajue says. “The short conversation I had with Peter Snelgrove at GerrAudio answered all of my questions and, with Apex just a couple of stops down the highway from us, it’s very easy to consult with them and get advice and information quickly. That was a really big deal for us.”

The ability to send audio upstairs to our broadcast/recording room via a single Cat5 cable is huge. 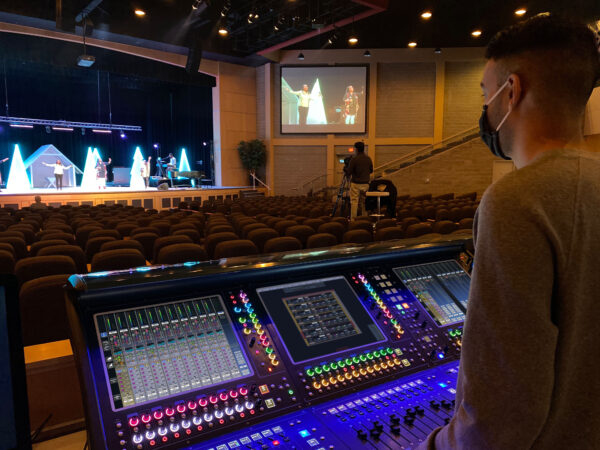 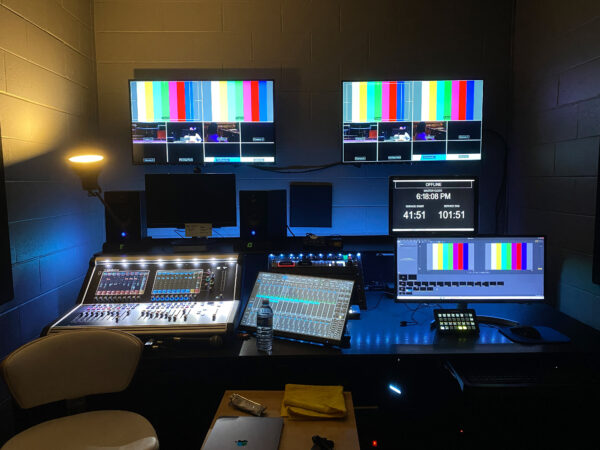 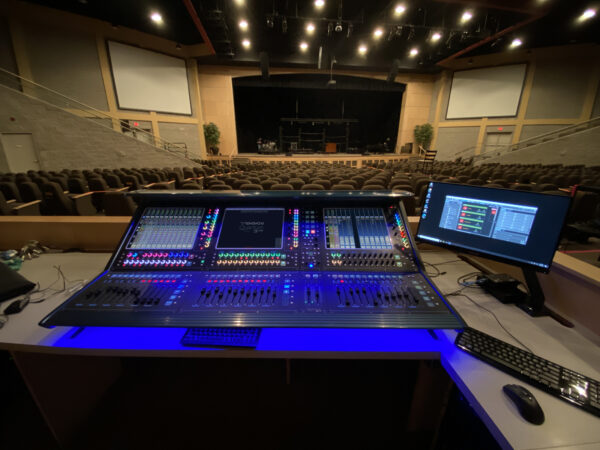