BROOKLYN PARK, Minnesota – Forty years ago, Mac and Lynne Hammond stood before a gathering of a mere dozen individuals in a small meeting room at the Radisson Hotel in Plymouth, Minnesota, marking the foundation of Living Word Christian Center (LWCC). Today, the church’s membership is going on 10,000, and the much larger congregation now meets in a beautiful church with a 3,000-seat, fan-shaped sanctuary on 75th Avenue in nearby Brooklyn Park.

With the exponential rise in membership and expansion of facilities have come increased production requirements, which prompted LWCC to upgrade its FOH mix position with a new DiGiCo Quantum338 mixing console paired with an SD-Rack equipped with 32-bit ADC/DAC cards and ST Optics. Locally-based integrator Audio Logic Systems supplied and installed the new gear, as well as simultaneously upgraded the church’s existing DiGiCo SD8-24 monitor console’s SD-Rack with ST fiber-optic connectors, putting both consoles and SD-Racks on an Optocore loop.

“We hold four services each week, and our music style here is Contemporary, along the lines of Jesus Culture, Bethel, and Elevation,” LWCC Lead Audio Engineer Scott Fahy describes. “The band generally consists of drums, bass, electric and acoustic guitar, one or two keyboards, and Ableton tracks, with four to six vocalists leading out, so, on average, our weekly channel count is around 35 inputs, give or take a few. However, for special events, we may add a Hammond B3, five horns, a string section, eight to ten more vocalists and, hopefully at some point, we’ll be able to have our choir sing again. So we really needed a console that could better accommodate our increasing channel count.”

Fahy shares mixing time on the new Q338 with another individual who is no stranger to the DiGiCo platform—Robert “Cubby” Colby, a locally-based FOH audio engineer that has worked with Prince, Britney Spears, Phil Collins/Genesis, Shakira, Juanes and many other top names in popular music. He has been volunteering to help mix at LWCC for three years now, on and off, as his touring schedule has permitted. As a longtime user of DiGiCo consoles—particularly the large-format SD7 and SD5—Colby says that he was immediately wowed by the new Quantum console.

“I was immediately taken by the three 17-inch screens and meterbridge hood—it’s a beautiful-looking and beautiful-sounding console,” Colby enthuses. “Having 38 faders on the top layer gives you a great handle knowing you will be able to arrange your ‘go-to’ inputs, returns, control groups and subgroups in any fashion. It’s amazing what two more faders on that layer can do for you! As to what you’re used to seeing on the SD-Range, the layout is very similar and familiar. The faders and knobs are different but still perfectly accurate. DiGiCo has also added 32-bit converters to local mic/line and the eight local line outputs, which is sweet!”

“In addition to what you are used to having available dynamics-wise, the new Spice Rack and Mustard processing offer classic and vintage VCA compressors, and two others, plus a couple of new preamplifiers. You can also have odd/even harmonics, crunch, and more. There are a plethora of different options with dynamics to choose from, including the Chilli 6 dynamic EQ, which is particularly helpful when we have guest speakers that bring in their own headset or lav mics. There are so many amazing tools in the Quantum toolbox that we don’t need to use any outboard gear at all. And if you somehow don’t find what you need in the new tools, you always can go back to what your favorite options were from the SD-Range desks that are still present on this new platform.”

Last year, prior to the new console going into LWCC, Colby had the opportunity to spend some time behind another Q338, which helped him mull over an audio solution for the church’s sanctuary and video-streamed broadcast mixes. “Living Word does both mixes from the same console,” he says. “My objective was to use the new Nodal Processing feature to tweak any chosen input so it wouldn’t change in the sanctuary, but have the ability to change EQ, dynamics and EFX for the online mix. I put together a demo from tracks that I had recorded at LWCC, and I used two sets of speakers to emulate the sanctuary and online mixes. I listened to the sanctuary mix with ADAM Audio A7X studio monitors and a sub to give it the full-range sound of the room, while the online speakers were super-small to emulate more of what most of the listeners online are using, such as an iPad, laptop or phone. I was able to demonstrate the Nodal Processing feature very well this way and how we could approach the issue of one engineer generating two separate mixes. For instance, it’s easy to identify the low-end instruments with the full-range sanctuary mix, but they would fall too far back on the online mix, so I would re-EQ/dynamics these instruments with Nodal Processing to pull them forward and be more present on the online mix.”

“Another good example is that vocals are often too far forward on the online mix because, with praise and worship mixes, you want to have those vocals out front in the sanctuary,” he continues. “The congregation is there to participate in the singing of all these messages. So I set up a stereo aux mix, which allowed me to make baby steps in getting this better balance between room versus online better. The online mix is post-fader, which tracks everything I’m doing in the room. I would listen to the online mix and dial back the aux bus on different inputs to build what is now a much more consistent online mix. The same holds true for the acoustic-only inputs in the room, like the grand piano and drumkit. Everything else is direct. There are times where we have a five- or six-piece horn section or a string section. This would apply to these instruments as well. And being able to utilize the panning within the stereo aux buss was beneficial to the online mix, too.”

Fahy and Colby both report that the new Q338 console is performing very well for them. With the sanctuary loudspeaker system configured as an LCR setup, Colby asked Fahy if he could come up with a macro setup that would allow him to take the vocals—anywhere from two to twelve, as it changes every weekend—and toggle each one of them between a lead vocal control group or a background control group, so Fahy built macros for this purpose. “Each RF mic is assigned a macro, which is very clever,” says Colby. “I think it would be fair to say that we all noticed the sonic difference immediately. With True Solo, I’m able to put headphones on and have a more accurate sense of my online mix in real time and make adjustments to that mix and the Nodal Processing.”

Colby adds that products can only be truly great if the people that design, build, service and support them are just as reliable, and to that end he gives DiGiCo top marks. “I just keep getting blown away by DiGiCo’s support, which goes above and beyond at all time—no one else even comes close. Matt, Kyle, Ryan and Trevor at Group One [DiGiCo’s US distributor] and the team in London and around the world have fielded every question or concern, and the best part is that they respond within minutes. This has been my experience since their inception—bravo! And Audio Logic Systems did an outstanding job with the install. John Markiewicz and the ALS team were very generous with their time and opening their shop to LWCC and me to let us be better prepared for the changeover, and the whole process has been a seamlessly smooth and beautiful sounding experience.” 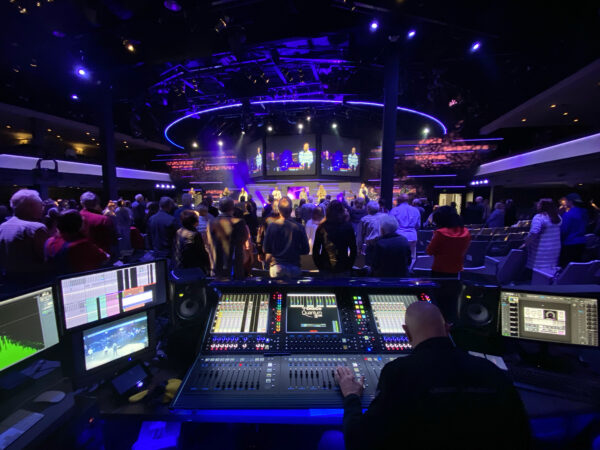 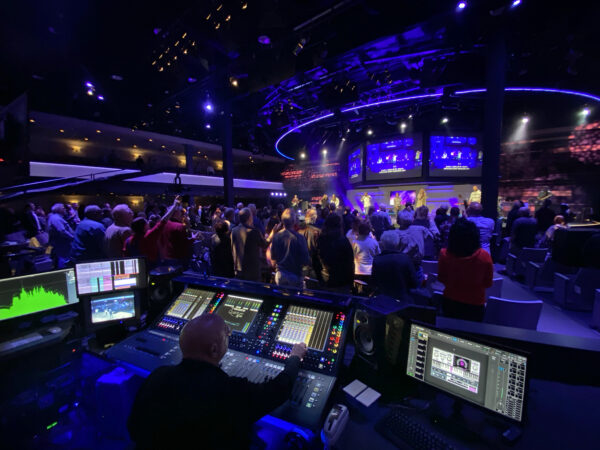 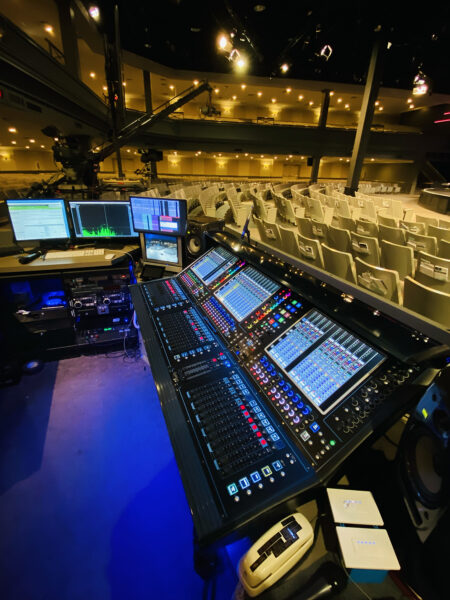 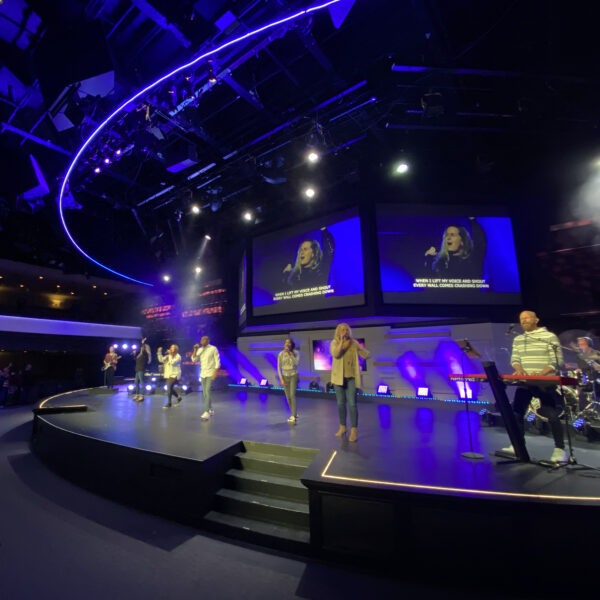