DiGiCo Goes Out With Ellie Goulding

UK-based singer-songwriter Ellie Goulding is currently in the middle of an extensive tour that kicked off in Europe in January with Adlib Audio and includes two North American legs extending into late June, with European and US festival dates plus shows in Australia and New Zealand keeping her on the road through mid-October. The Delirium World Tour’s North American dates, with audio production handled by Eighth Day Sound, include a full complement of DiGiCo mixing consoles—an SD5 at front-of-house with an SD10 available for opening acts, and an SD7 at the monitor position.

CLEVELAND, Ohio – June 2016 – UK-based singer-songwriter Ellie Goulding is currently in the middle of an extensive tour that kicked off in Europe in January with Adlib Audio and includes two North American legs extending into late June, with European and US festival dates plus shows in Australia and New Zealand keeping her on the road through mid-October. The Delirium World Tour’s North American dates, with audio production handled by Eighth Day Sound, include a full complement of DiGiCo mixing consoles—an SD5 at front-of-house with an SD10 available for opening acts, and an SD7 at the monitor position.

FOH engineer Joe Harling, who has been touring with Goulding for two and a half years, first started using DiGiCo desks three years ago. “I find that their routing flexibility and features such as two insert points per channel allow me to achieve what I want. They have a very neutral sound, which is a good ‘blank canvas’ to start building from,” says Harling, who has also worked with Lana Del Ray, Maccabees, Michael Kiwanuka, Meteronomy and numerous others.

On the Delirium tour, Harling is also using two Waves SoundGrid servers with the SD5, running MultiRack externally on a Mac Mini via a DiGiGrid MGB interface. “I’m using a fair bit of nice outboard for compression and reverbs, but I still lean pretty heavily on Waves plug-ins,” he says. “I like to think of my plug-ins as 50 percent ‘utility’ and 50 percent ‘vibe.’” A second MGB interfaces to another laptop hosting Metric Halo’s SpectraFoo for RTA metering plus “weird and wonderful effects from Valhalla and Soundtoys,” he adds.

Mike Flaherty, with Goulding as monitor technician since 2013, took over as engineer in mid-2015. He has mixed on DiGiCo desks since the beginning of 2014, initially using an SD10. “I found the footprint was perfect for festival situations, and the versatility of the board was everything I needed. Since then I’ve used the SD9 on other tours and have the SD7 on the current tour,” says Flaherty, who, as an 11-year veteran with UK rental company Adlib Audio, has also worked with The Script, Foals, and Catfish and the Bottlemen.

“I find the dynamic EQ a very useful tool as I don’t incorporate Waves into my sessions,” continues Flaherty. The console’s video input has also been convenient, he says. “That was especially useful when we were touring with a B stage. The video guys ran a show feed into the console, which helped massively when I couldn’t see Ellie at the other end of the arena.”

Harling, who has a background as a musician and has been a FOH engineer for the past 15 years, has been relying heavily on plug-ins on the Delirium tour, he reveals. “The band mix on this gig is very busy and constantly changing, and Ellie’s vocal is very quiet, so I use my utility plug-ins to try and clean stuff up and make space for the vocal. I use WNS on Ellie’s vocal to get a bit more gain before feedback and reduce spill into her mic, which is especially useful if she’s on a B stage or thrust.”

Harling typically has numerous instances of C6 running, as he explains: “I use quite a lot of side-chaining—for instance, kick drum ducking the lowest band of C6 on bass guitar and synth bass; Ellie’s vocal ducking a tiny bit of mid-range out of a C6 on the band mix; acoustic snare drums ducking the transient of triggered electronic snares in C1; and triggers on the acoustic snares being used to open gates. I then use character plug-ins such as API EQs, H-EQ, CLA76, NLS, the Puig comp and EQ, and H-Delay to give me the vibey sounds.”

In contrast, Flaherty leans on the DiGiCo desk’s on-board facilities for his DSP needs. “I keep everything internal to the board except for Ellie’s vocal and drum effects, where I use two Bricasti M4 reverbs running AES into the console. That helps to keep things as consistent as possible for the band when we have to deal with fly shows and one-offs,” he reports.

Both engineers are making use of the snapshot capabilities in the DiGiCo consoles, with Flaherty typically using them to recall fader and mute changes plus some EQ moves between songs. Harling’s snapshots are triggered by MIDI timecode from the stage. “On the desk there isn’t much happening scene-to-scene, apart from mutes, fader levels and some EQs on the electronic sources such as keys and playback,” Harling explains. “Each snapshot also sends MIDI to Waves and to my System 6000 reverb unit. In Waves, it’s pretty much just sending tempo information to H-Delay, and the 6000 has various user presets recalled for each song.”

Harling sends four DiGiCo matrix outputs, designated left, right, sub and fill, to system tech George Puttock’s rack of Lake processing. “George does all the system timing, etc., in there, but I still find it useful to have hands-on control over sub levels and so on in the desk. The matrix section of the DiGiCo is great, as anything can go anywhere. I actually don’t send my vocals to the main L/R buss, but rather have them meet the band mix in the matrix, where appropriate levels can be adjusted per send. I also can build broadcast mixes and press feeds in there, with different ‘mastering’ compression or EQ applied,” Harling elaborates.

At monitors, Flaherty is generating stereo IEM feeds from the SD7 for 12 performers, all on in-ears—using Sennheiser EM2050 transmitters—with 22 body packs assigned. “There are five mixes for Ellie and the band, with three BGV sends. For this campaign we have the addition of four dancers who have another mix with four cloned packs. The remaining three sends are for the playback tech, my PFL and a spare transmitter. I also run three additional sends to d&b Q-SUBs for the drummer, bassist and keyboard player.”

For a list of Delirium’s tour stops, visit www.elliegoulding.com. Eighth Day Sound and Adlib Audio can likewise be found online at www.8thdaysound.com and www.adlib.co.uk, respectively.

The matrix section of the DiGiCo is great, as anything can go anywhere 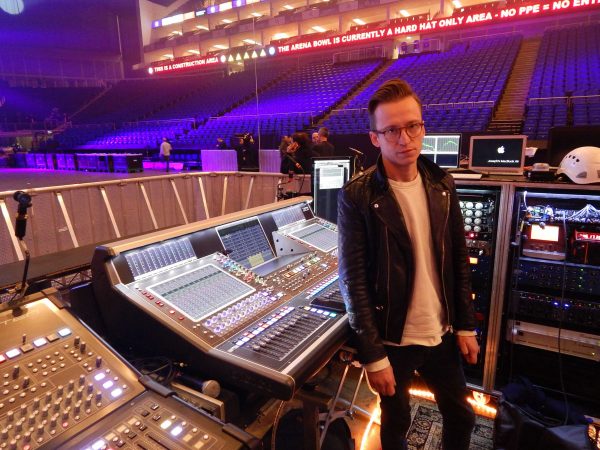 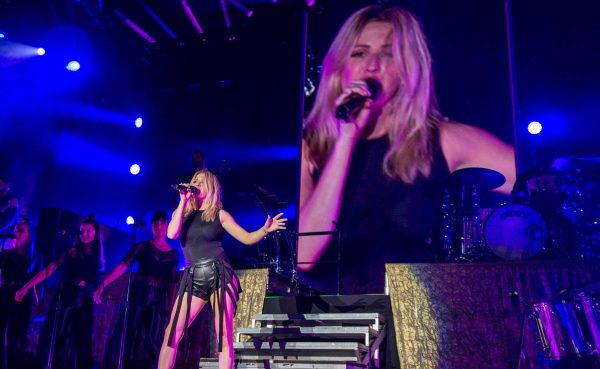