CLEVELAND, Ohio – Although North American audiences were justifiably disappointed when Nicki Minaj cancelled her fall 2018 NickiHndrxx tour with Future after deciding to “re-evaluate elements of production” and devote more time to rehearsals before hitting the road, her overseas fans recently got the chance to reap the benefits of a fantastically solid show. Teaming up with Juice WRLD on the aptly named Nicki WRLD tour in support of Queen, her fourth and most recent album, the latest trek stopped at 22 arenas throughout Europe and the UK from February 21 and March 28.

Cleveland-based Eighth Day Sound supplied the tour’s PA and control package, which featured DiGiCo SD5 consoles for both FOH and monitors, paired with five SD-Racks and an SD-Mini Rack, all on an Optocore loop. “We used a traditional splitter for some inputs, but also shared inputs via the loop,” describes FOH engineer Kevin Brown, who has also mixed for Chris Brown, Outkast, American Authors, Toni Braxton, Kid Cudi, Joi and others. “Looping the consoles also enabled us to use the Con Send and Receive ports, which was particularly useful when I needed to send audio down to monitors; this could be talkbacks, FX or playback audio from FOH. I also used the new DiGiGrid MGR at my console for recording and virtual playback.”

Although he has been a fan of DiGiCo’s SD-Range for several years, the Nicki WRLD tour marked the first time that Brown had had the opportunity to use the manufacturer’s new 32-bit “Stadius” Mic Pre-Amp modules. “DiGiCo did an amazing job with them!” he enthuses. “The noise floor is almost zero, and the dynamic range is incredible. Using them on vocals gave me a big, clean sound. We also used them for keyboards. The guys on keys had a lot of analogue synths to replicate the sounds used on the records, and I wanted to make sure we captured what makes us all love analogue synths. We also shared another 16 channels of 32-bit cards that were located in the SD-Mini Rack mounted with our playback rig.”

Marlon John, who has been Nicki Minaj’s monitor engineer on all of her tours dating back to 2010, was equally thrilled with the new Mic Pre-Amps. “I first used the new cards last summer with the Migos and loved them,” he recalls. “On this tour, we originally used them only on the vocal mics, and they sounded phenomenal—especially on Nicki’s mic. Having previously worked with her on various other consoles and DiGiCo desks prior to having the new cards, I noticed that her vocal was actually much easier to mix with the 32-bit Mic Pre-Amps. Her voice sounded bigger and fuller, and I required less gain to get her vocal to where I needed it to optimally sit in her mix.”

For the Nicki WRLD tour, her backup band was comprised of a drummer, two keyboard players, a DJ, a backing vocalist and playback, which put the input count at around 80 channels for Minaj’s set. Adding Juice WRLD’s inputs, plus other local openers, raised that to over 100 channels. “Even with that many channels, the SD5 made it easy to navigate the show via snapshots and spill sets,” says Brown. “I could organize my banks and layers based on the inputs needed for a given song and store the location in the snapshot. Juice WRLD initially played after the first half on Nicki’s set; she would descend on one lift, Juice would come up another, and it had to be a seamless transition, so I built a snapshot for his engineer within my session. The SD-Range consoles have a very powerful snapshot engine; we were both able to have all of the settings we needed at the click of a button.”

With all vocalists and musicians on IEMs, and no wedges for stage monitoring—aside from two d&b J-Sub and four J8 flown as sidefills—John was manning 20 stereo and six mono mixes on his sub-stage SD5. “With the spill set, I was able to configure and lay out the bank where everything was easy to access. Like FOH, we shared the monitor console with Juice WRLD on this tour, and with the SD5’s great snapshot feature, I was able to use one snapshot for him within my Nicki Minaj show.”

Having mixed monitors for everyone from Trey Songz, Drake and Lil’ Wayne to Ne-Yo, Snoop Dogg and Prince over the years, John has steadily relied on the SD platform since 2014. “The SD5 is my console of choice; in fact, it’s the only console on my rider. I love its layout, and with the multi-screens, I find that I can navigate around the console very seamlessly.”
“I have been using the SD platform for a quite a few years now as well,” Brown chimes in. “I don’t feel at all restricted by its architecture. It allows me to be creative without worrying about technical roadblocks. Though I was very happy with the SD5 on this tour, my personal favourite is really the SD7, especially with the new Quantum engine. And another thing that I love about DiGiCo is its people. Between Group One in the US and the main office in the UK I can always get a question or concern addressed. They stand behind their products and are always open to feedback from us everyday users. It’s a great feeling to know the company fully supports us.”

John agrees: “I have known Group One’s Matt Larson for almost ten years now and he is my ‘go to’ person—he can always put me in touch with DiGiCo’s great tech support team. I can always rely on them to assist me with any problem I have anywhere I might be in the world, day or night. Out on the road, that level of service is priceless.”

Nicki Minaj just announced that she will be touring North America this summer with Chris Brown. For more details, visit www.mypinkfriday.com. Eighth Day Sound can also be found online at www.8thdaysound.com.

DiGiCo did an amazing job with the 32-Bit Stadius Pre Amps. The noise floor is almost zero, and the dynamic range is incredible. Using them on vocals gave me a big, clean sound. 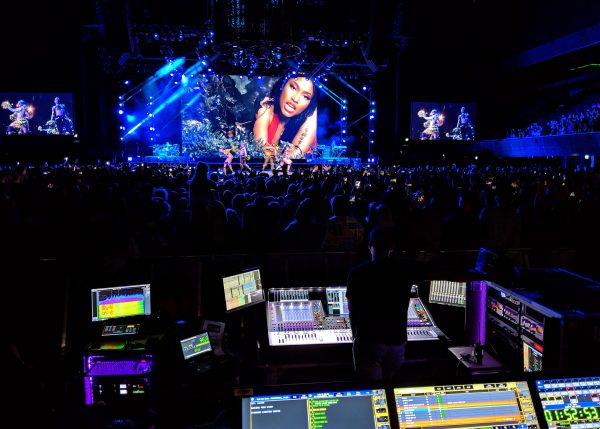 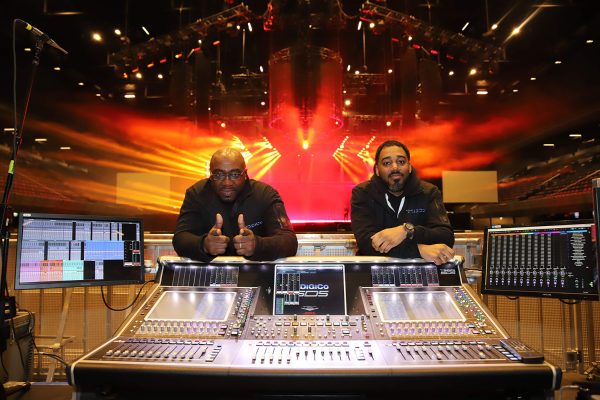 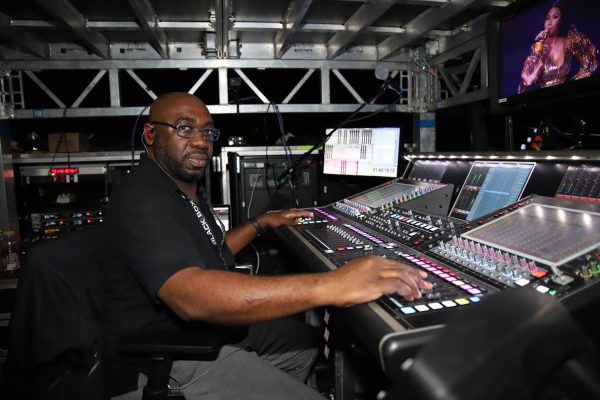