Anthony Cherry, producer of Friday Night is Music Night, aired on BBC Radio 2, undertook the ambitious project of recreating Charles Dickens’ A Christmas Carol on stage at the Royal Festival Hall in December.

Anthony Cherry, producer of Friday Night is Music Night, aired on BBC Radio 2, undertook the ambitious project of recreating Charles Dickens’ A Christmas Carol on stage at the Royal Festival Hall in December. Mark Gatiss, as Narrator and Scrooge, lead a company of star actors and the concert included six scenes from the Dickens classic. DiGiCo SD7s were deployed at Front of House and monitor positions for this ambitious production.

Antony Shaw (FOH/BBC) was responsible for planning and configuring the DiGiCo infrastructure.

“This was no mean feat considering the brief,” he recalls. “We had a 70-piece orchestra, four guest vocalists, a 12-piece backing vocal section (all with parts to play), Katie Melua plus her 24-piece choir, and the small addition of an 18-actor live drama underscored with the orchestra and vocal section. This was all brought to life with sound effects, audio skylines, and FX returns, created in one of two OB sound trucks. Oh, and the show was broadcast in stereo AND binaural, with only a single day to get in, do the show, and get out.”

With such a large channel count (172 in total), Antony insisted that both FOH and Monitor surfaces had to be DiGiCo SD7s with Stealth Core 2 upgrades. Three SD-Racks and three SD-Mini Racks were included on a single Optocore loop, with an SD9B (with optics) doing the broadcast mix for the drama elements.

“The flexibility of the Optocore loop made the intricacies of the show possible,” says Antony. “Console send and receives dealt with audio stems from the SD9 (a combination of post fader channels and group outputs) to FOH and then on to monitors, and a shout matrix that integrated with the OB comms system. The whole set-up was clocked to the BBC Sound 3 OB truck (Nexus system) via a Rosedahl Nanosyncs HD to buffer the clock and avoid any glitches on stage should the incoming clock fail. A pair of Extreme Waves servers were included at FOH, with a Dan Dugan automixer on the post fader insert B point of each of the 18 actor channels. Making use of both crossfaded snapshots and set spills, the whole show got cascaded up into a much more manageable affair. Thanks, Dan!”

Monitors, mixed by Gareth Iles (BBC), consisted of 20 possible wedge mixes, four IEM mixes and two separate 16 stem Aviom systems; one for Capital Voices, the other for the rhythm section. Utilising (and nearly exceeding, when combined with the high number of channels) the SD7’s impressive aux count, each of the 12 singers had their own voice on a discrete Aviom channel plus a stereo mix of vocals and reverb, and a stereo mix of orchestra and everything else. This enabled the vocal group to be pretty much self-sufficient, with minimal monitoring requests once the generic mixes were dialled in.

BBC Sound 9, an empty truck with some infrastructure, was responsible for sub mixing the drama and sound effects elements of the show.

“Marc Willcox and John Hemingway took the helm (BBC), using an SD9 for the first time and survived to tell the tale,” smiles Antony. “Marc enjoyed his first experience, jumping in at the deep end, making good use of the set spill feature and using the flexibility of the Macros to switch FX for specific characters.”

Plus4Audio provided the majority of the DiGiCo system as well as the RF, power distro and line system. Due to the lack of time and funding for full technical rehearsals all three DiGiCo desks were built entirely offline and checked by Plus4Audio in the warehouse.

“The load in and rig took around four hours and was followed by a 172 channels line check with no errors,” Antony concludes. “This really does speak volumes for the thorough approach Plus4Audio continue to deliver on these large-scale shows. Our thanks go out to Plus4’s Neil White and Lewis Wareham.”

The show aired on 23rd December at 8pm on BBC Radio 2 and a binaural adaptation was available online at the same time.

With such a large channel count (172 in total), both FOH and Monitor surfaces had to be DiGiCo SD7s with Stealth Core 2 upgrades. Three SD-Racks and three SD-Mini Racks were included on a single Optocore loop, with an SD9B (with optics) doing the broadcast mix for the drama elements. 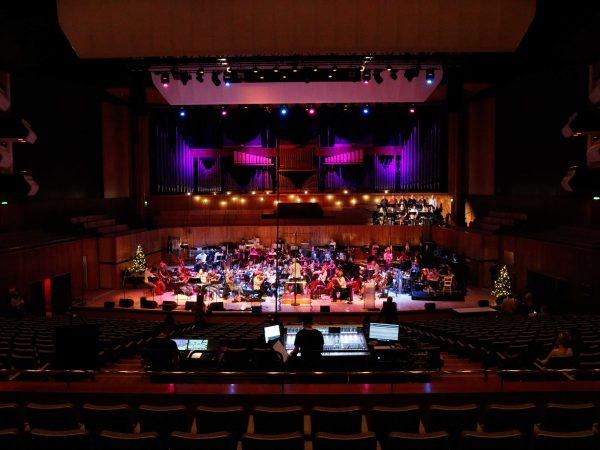 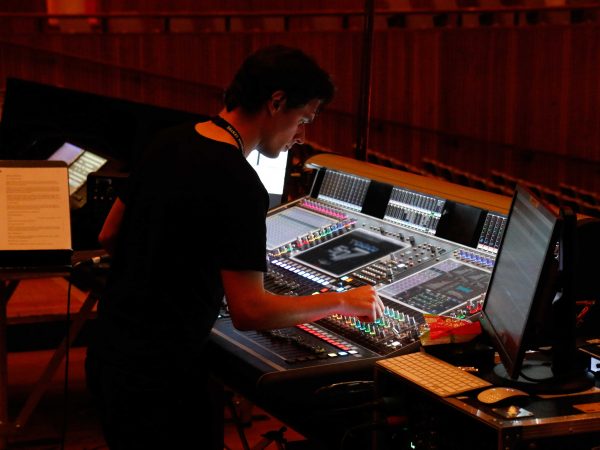 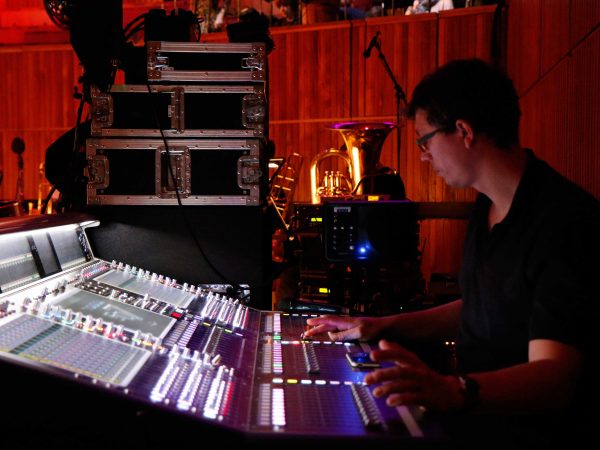