Gorillaz was formed 20 years ago by Blur frontman, Damon Albarn, and Jamie Hewlett, co-creator of comic book, Tank Girl. The aim was to fuse their respective skills to create a virtual band with virtual band members. Gorillaz' self-titled debut album, released in 2001, sold three million records and earned them a place in the Guinness book of Records as Most Successful Virtual Band.

Gorillaz was formed 20 years ago by Blur frontman, Damon Albarn, and Jamie Hewlett, co-creator of comic book, Tank Girl. The aim was to fuse their respective skills to create a virtual band with virtual band members. Gorillaz’ self-titled debut album, released in 2001, sold three million records and earned them a place in the Guinness book of Records as Most Successful Virtual Band. Since then, the project has continued to evolve, as has the size of the production: it is now all about the real players (and very special guest stars) rather than just the animation, and Albarn and co. are often more than 20-strong when they hit the road. With such a big show, of course, comes great sonic responsibility, all of which is in the hands of Matt Butcher at FOH and Dave Guerin at monitors, both of whom rely on DiGiCo for everything.

“I started with Damon [Albarn] after Parklife came out, so we go back a long way,” Butcher says. “Right at beginning of the year, for pre-production, we wanted to not compromise on any of the audio – and that’s the way to go: don’t mess around, do it right. Because I’ve known Damon for so long, I can get quite involved, so I can suggest things he should try – it’s quite good leverage, because we have a good understanding of how each other works.”

From an audio perspective, this show is huge. The FOH and monitor consoles – both DiGiCo SD7s – are maxed out, plus there is an SD11B deployed for the shout system.

“The SD11B is also there for monitoring for the playback and the keys tech,” Butcher continues. “He can monitor off the Optoloop rather than the submix of something, so he can see all the individual channels off the Optoloop. Furthermore, we have a [Waves] LV1 which the RF guy uses to monitor all his RF; that’s on a patch from the SD11 to get the channels to him.”

“We use the chat feature on the SD11 a lot, and with [RF engineer] Andy, too,” adds Dave Guerin. “And having RF on the same loop means we can all text chat during the show, which is really useful, as in the middle of the gig you can’t always hear what everyone’s shouting.”

The stage is equally as packed as the mixing consoles: in addition to Albarn, who’s on guitar and grand piano, there is a drummer, a percussionist, a bassist, guitarist, two keys players, six BVs and, for the London show, five ‘hypnotic’ brass, and a five-piece string section.

“Since Demon Days, it’s got a lot bigger,” admits Butcher. “Damon has plenty of ambitious ideas about what he wants in the band, which is great, but very challenging. But it does mean we get amazing people playing, and with that, some amazing textures.”

“This is the first show with brass and strings, but we’ve managed to shoehorn it in,” smiles Guerin.

Every show is recorded using 128 inputs and a DiGiGrid MGB running off two MADI streams at 48kHz. It would not be possible, both engineers concur, without the SD7s.

“It’s the best – and probably only – control surface to do something like this on,” insists Butcher. “The symmetry of the SD7 means you can have a left bank, a right bank, and a bank in the middle; that means you can be doing three things at once. I have instruments on the left, vocals on the right, and mixing VCAs in the middle; then the small faders just as FX keys. We are running eight radio mics, and doubling them up into individual channels for guest artists, so individual artists get their own channel, and you don’t have to worry. Then I keep the automation to some sensible level.”

“The small faders are my output, but other than that, it’s all the same as Matt,” Guerin says, adding that he is running a massive 192 inputs.

“With this sort of sized show, we have to be on top of things,” Butcher explains. “Dave writes the spec, and we all add to it. Rack-wise, we have three SD racks and one [DiGiCo] Orange Box, and that’s got two MADI outs – it is the digital in for the keys and tracks, and sends for record. So we’re patched for that as well.

“I’m also running a Waves SoundGrid package on an external rack, but I love a lot of the internal stuff, too; I love the dynamics and multiband compressor on the SD7, and I am using the Waves stuff for things like distorted snares, a gated fuzzbox with reverbs… basically all the daft stuff! And again, through the course of mixing Gorillaz, we have always had a go at doing some dub stuff to make it exciting, and get more involved in the whole sonic thing.”

Guerin also uses much of the internal processing within the SD7: “I have a couple of Distressors, which are great for limiting vocals, then everything else is coming from the console, and all the FX and processing is great. I’ve got 30 stereo mixes and 20 monos: all the ears are stereo, the sidefills and front wedges are stereo, and you can do BVs left, right, and front, and Damon’s vocal sits in the middle. Everything sounds better in stereo, and it gives him that bit more space, too.”

Gorillaz will hit the road again in March, heading to South America for the next leg of their tour, playing in Mexico, Chile, Colombia, and Brazil; and will play a string of major European festival dates this summer.

It's the best – and probably only – control surface to do something like this on. The symmetry of the SD7 means you can have a left bank, a right bank, and a bank in the middle; that means you can be doing three things at once. 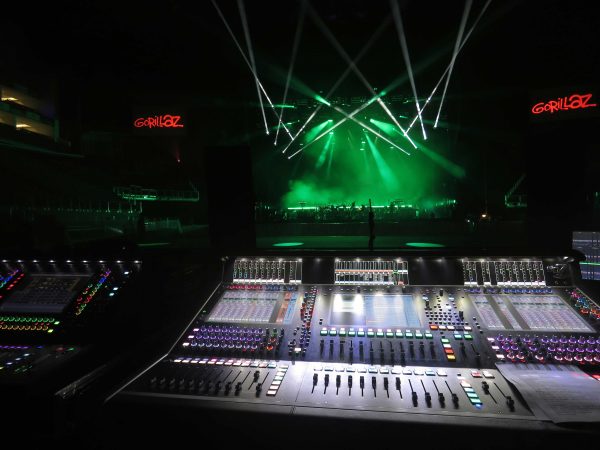 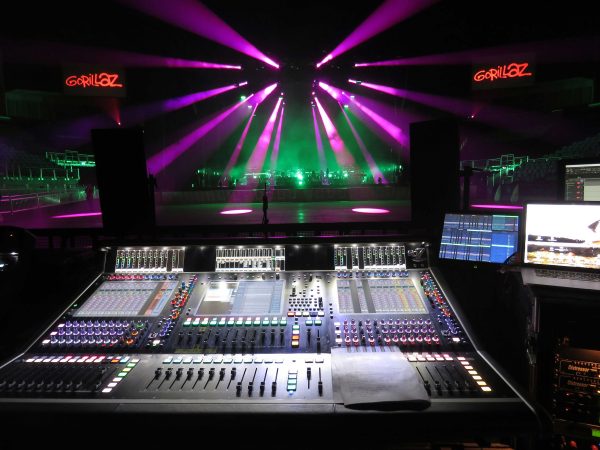 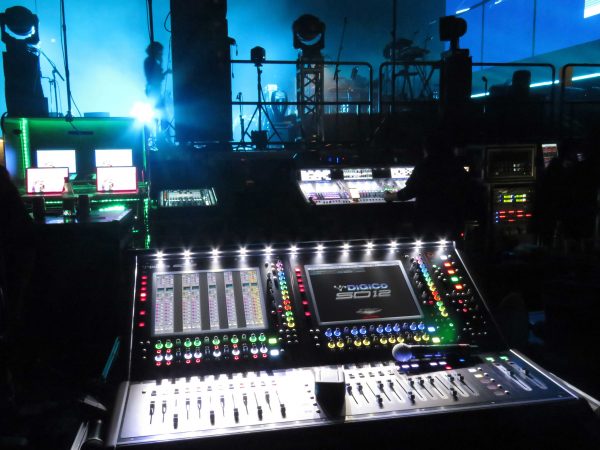