Heart Church in Nottingham expand to new spaces in a former TV centre, and calls upon Audio specialist Wigwam to design and package a ‘touring’ audio solution that can be rapidly deployed each week.

As churches have welcomed increasing numbers of worshippers over the years, growing pains inevitably lead to expansion or relocation. Instead of conforming to the norm, a U.K. church decided to adopt a more flexible set up for their future needs. Rather than investing in a property with a larger footprint and growing its roots into a specific postal code, Heart Church has taken the unusual step to go mobile. Just as SaaS (as as Service) represents recognised cost savings over traditional infrastructure, a portable audio package promotes modular and future proofing benefits.

Welcoming a multi-cultural cross section of congregants, Heart Church in Nottingham hosted two Sunday and smaller midweek services from a large modern building in Talbot Street until earlier this year. Incorporating a highly charismatic service with an ensemble of talented musicians who perform their own compositions, Heart Worship’s Pentecostal style of worship benefits are further boosted with a large LED screen and fully loaded lighting trusses above the stage. The big productions needed a bigger room, however, leading the church committee to opt for a more flexible set-up.

Located within two miles of Talbot Street, on the same north bank of the River Trent, their search led to King’s Meadow Campus within the University of Nottingham. The complex, which previously served as an ITV studio complex for local Carlton TV until 2005, was available on a rental basis. The flat floor and acoustically treated properties of Studios 7 and 11, presented the church leaders with a blank canvas of possibilities. Both the 729- and 180-sq-m spaces could be transformed around the evolving nature of their services ranging from the purely functional to something exceptional, with technical facilities brought in for each service.

The entertainment technology hardware installed within Talbot Street remains in situ as midweek services and events continue to take place at the administrative headquarters.

Unable to commission a systems integrator to install a permanent audio, lighting and AV system into both studios, Heart Church called upon U.K. audio installation experts Wigwam for assistance. Now part of Solotech, Manchester-based Wigwam is renowned for live touring, diversifing into an installation/integration business in 1990. It has rapidly gained a reputation amongst the HoW community in the U.K. “Our growing customer base for audio installations extends from charismatic churches to major cathedrals,” explains Wigwam sales manager Phil Goldsworthy. “Wigwam’s stock in trade is now sensitive installs.”

Initially surprised by Heart’s enquiry, Goldsworthy quickly appreciated why Wigwam had been requested to assist in their transition into the studio spaces. “They wanted to enhance the production values of their Sunday morning services for which the studios are ideal now. Should the number of worshippers increase, they’ve decided to keep it flexible by renting somewhere bigger at which time they can add more equipment to their inventory. Heart has already outgrown the existing building, but they don’t want to invest in another should they continue to expand.”

Wigwam proposed a loudspeaker and staging system that could easily be identified as a touring package for going out on the road. “All the equipment is flight cased,” comments Installations Project Manager, Tim Mortimer “The church shares the space with the University who still use these rooms for examinations, so the best solution was to make the flown loudspeaker system removable. The whole system is flight-cased and can be stored at the end of a service before being loaded back in the following week for their three Sunday services.”

“Their requirement was for a portable, high-end touring package,” furthers Moirtimer. “They’re looking ahead to the time when the rental agreement lapses with the University, so that they can easily pack up and go elsewhere. Owing to our touring pedigree, Wigwam was selected for its high-quality production values and expertise in packaging kit up for moving in and out. Having narrowed down their price-performance requirements, we agreed on training their volunteers alongside their very good in-house engineer. The acoustically treated studios sound amazing, but they also needed a portable stage for the empty space.”

Having arrived at that point, colouration of the canvas was required. “Heart conducted audio evaluations and demonstrations by comparing various speaker systems,” furthers Goldsworthy. “Ultimately, they were won over by the qualities of L-Acoustics Kara II loudspeakers. A line array was the main option as it would provide even coverage from the front to the rear of the room. In addition, they wanted a system that could be expanded should they need to host bigger events elsewhere. Kara is a perfectly modular, scalable system that can either scale up or down as they require.”

As stipulated by Heart, the variable curvature design of the Kara II modular line source system promotes flexibility for changing future requirements and multi-functional deployment. Offering 70° or 110° symmetrical and 90° asymmetrical horizontal directivity patterns, Kara II coverage can be tailored to changing room parameters. Weighing 26kg, the compact form factor and powerful, consistent SPL of Kara make it the perfect tool for events with needs ranging from a single plug-and-play cabinet to a larger concert system.

The French manufacturer’s Soundvision software was used to simulate the audio design for Studio 7. “It’s a great tool that ensures the angles are set up correctly,” explains Goldsworthy. The current set up includes L-R suspended arrays each consisting of nine Kara per side, with a further three providing front fill reinforcement. Low frequency enhancement is extended to 32Hz (-10dB) with the addition of eight SB18 18-inch subwoofers and four X12 coaxial models are deployed on stage as monitors for the worship leaders. “From start to finish, the actual installation took around three days in total, during which we added multicore and loudspeaker fixtures in the ceiling.”

A DiGiCo SD10 was the preferred choice of mixing console for Heart’s technical engineer Phil Southey. As an SD10 owner, Southey was more than familiar with the sonic qualities and ease of operation features associated with the digital console for both FoH and monitor mixing duties. With three banks of 12 motorised faders and one master fader, all functions are accessible from a centrally located 15-inch colour-keyed touchscreen, whilst presets can be recalled on the channel strip.

The rig includes a range of Sennheiser wireless systems including six channels of Sennheiser G4 in ear monitors for performers and 10 channels of ew500 wireless receivers for eight e945’s for the singers and two e935’s for the worship leaders. “The church definitely wanted to upgrade the production levels for their services for which the G4 line-up definitely hits the spot in terms of performance features, reliability and price,” explains Goldsworthy. “Like the rest of  the equipment, the transmitters and receivers are stored for mobile use in customised Wigwam flight cases.”

The smaller Studio 11 facility is used for the youth congregation where a live band is reinforced with a pair of L-Acoustics X12 coaxial point source enclosures mixed on a DiGiCo SD9 console. “Heart wanted to maintain the same quality for the youth services as the main services,” furthers Goldsworthy. “This would also allow the budding young volunteers to learn how to gain mixing skills that would allow them to transfer to the main venue in time.”

In addition to being blessed with even, hi-fidelity audio each Sunday, the room is capable of being transformed extremely quickly, owing to the portable nature of the equipment. Each Sunday night, the arrays are lowered onto three-way Kara dollies and into Sigma flight cases together with the consoles until the next service or event. “Training the volunteers was a vital part of the package we provide,” comments Goldsworthy. “Heart calls upon a large team of volunteers every Sunday to both load the system in and out. As such, we guided them through the process by loading it in and out several times so that it became second nature.

The touring theme is expanded to the mains power, which runs into Sigma 32A Distro units mounted into each mobile rack of L-Acoustics LA8 amplified controllers networked via the current LA Network Manager 3.1.3 software. Once in position, the DiGiCo SD10 console is simply connected to the Optocore fibre network. Of the two multicores acquired for the productions, one remains out of sight in the venue’s roof during the weekdays. For now, Heart is in the right place, but their leaders have certainly used their heads by consulting Wigwam to design the audio for their new home.

“This would also allow the budding young volunteers to learn how to gain mixing skills that would allow them to transfer to the main venue in time.” 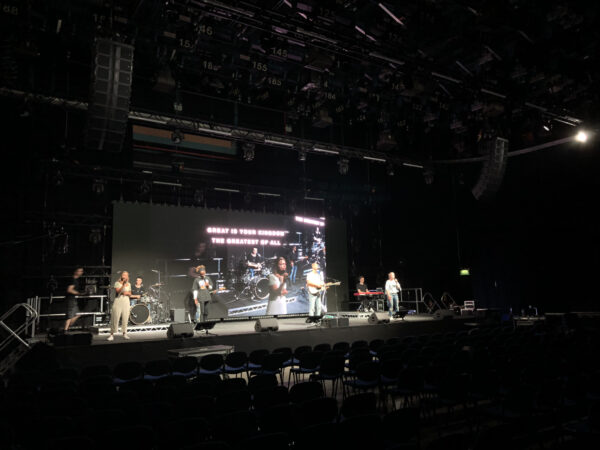 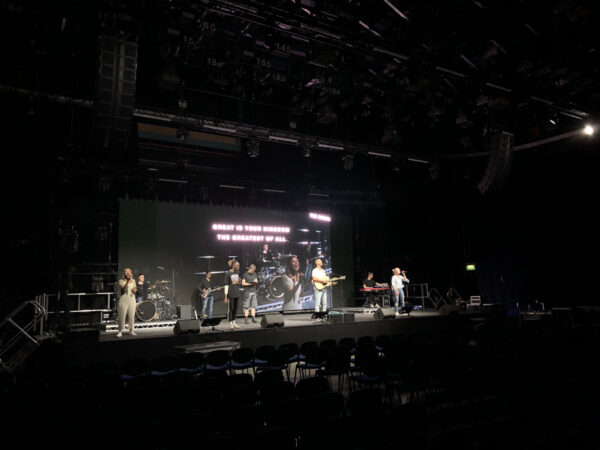 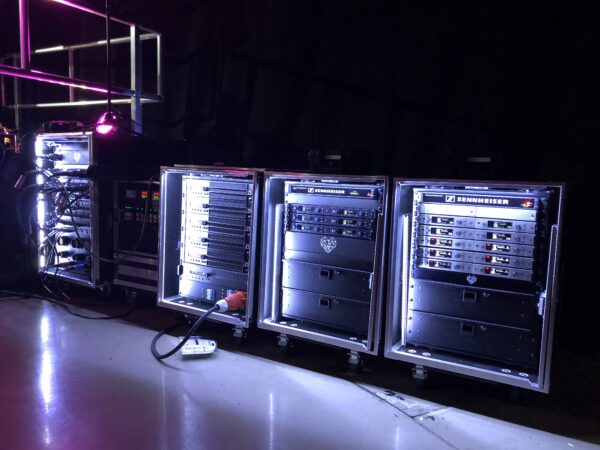 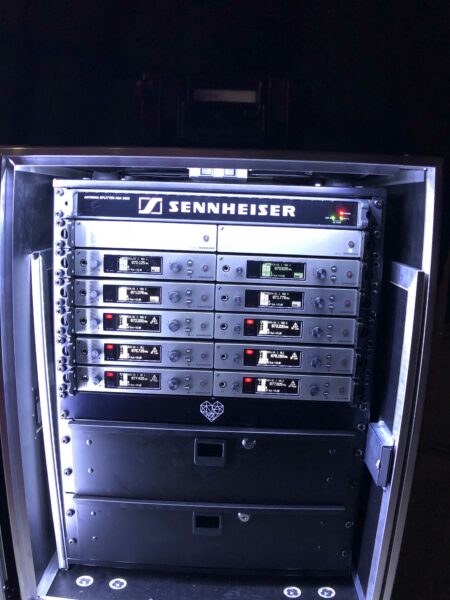