Home / Case Studies / DiGiCo Gets It In The Back Of The Net For World Cup 66 : Live

DiGiCo Gets It In The Back Of The Net For World Cup 66 : Live

It is 50 years since the legendary FIFA World Cup win of 1966. To mark the anniversary, the FA held a series of events culminating in a spectacular live stage show at The SSE Arena, Wembley on 30th July at 3pm, exactly 50 years to the minute since kick off on that historic day. Skan PA Hire provided the entire audio system, with four DiGiCo consoles deployed for Front of House and monitor mix positions.

It is 50 years since the legendary FIFA World Cup win of 1966. To mark the anniversary, the FA held a series of events culminating in a spectacular live stage show at The SSE Arena, Wembley on 30th July at 3pm, exactly 50 years to the minute since kick off on that historic day. Skan PA Hire provided the entire audio system, with four DiGiCo consoles deployed for Front of House and monitor mix positions.

The show, which brought together music, fashion and football, retold the story of England’s victory that summer, recounted minute-by-minute through current reflections and historic footage, accompanied by a house band, an orchestra and guest singers including Lemar, Sophie Ellis Bextor, Chris Farlow and Kelly Ellis. There were also four guest bands, The Troggs, Reef, Squeeze and the cast of West End show, Sunny Afternoon: The Kinks Musical. The entire show was broadcast live on BBC Radio 2, red button and into cinemas nationwide.

Skan provided two separate systems comprising two SD7s and two SD5s to allow for quick changeovers and line checks of the guest bands, while the house band / orchestra and presenters stayed live and static throughout the show. An SD11 processed the VT playback and presenter mics and had a Dan Dugan auto mixer inserted to assist with the actors dialogue.

“The consoles were selected primarily because they were the preference of the engineers working on the event, but also because of the required channel count,” says Skan’s Tom Tunney. “The two house SD7s needed to process 96 inputs from stage and the two SD5s needed to not only be able to process 48 inputs from the guest bands, but also able to join the house band network, providing full redundancy for SD7s as an additional backup.”

Steve Lutley took up the monitor position for the house band and crew, with Gary Bradshaw at their Front of House.

“I chose the SD7 for this project, not only because I believe that there is no other console worth considering for a professional performance, but because I was a little uncertain as to exactly what the monitor requirements would be before going into the single days pre show rehearsal,” says Steve. “I looked after the house band and guest vocalists whose MD, Mike Dixon, had to take live show cues from a Show Caller and many other cues from the actors live dialogue during the performance.”

“My SD7 took control of gains for 112 inputs,” Steve continues “I was on the same optical loop as Gary Bradshaw’s SD7 and Onno Ooms’, who handled FOH operations, SD11 and we shared gains on two SD-Racks and 1 x SD-Mini Rack.

“The SD7 gave me the versatility to be able to set up different scenarios, all of which I could achieve on-the-fly if needed, as well as cope with all the band member, string section and guests’ monitoring needs. The SD7 is the only console I would feel comfortable enough with to achieve these needs, in such a short time frame.”

It was a very tight show with either a guest band on, Gary mixing the house band, orchestra and guest vocalists or Onno was mixing the actors spoken word segments, meanwhile we would be line checking the next band,” recalls Matt Napier, who took up the FOH position for the guest bands. “The three SD Series consoles all worked seamlessly together. The SD5 for the guest bands was also the Master console. The Matrix facilities and macros on the SD Series made this simple.”

For the Guests, Matt had Layer 1 set up as the master generic input list, with Layer 2 providing each band with a dedicated bank.

“As the bands were only doing one song each, they had a dedicated snapshot and we could jump from one band to the next seamlessly. I was gain sharing with Becky Pell on monitors, where she had control of the gain. All FX and dynamics were on board, so the footprint and cabling for such a large show was kept to a minimum.  Sonically the SD5 lived up to the usual DiGiCo standards and the desk combined with the d&b J Series made mixing in a swimming pool – which is still under the floor at Wembley, affecting the acoustics – all relatively easy!”

“I’m a long time DiGiCo lover, so it’s always a simple question of which of the SD Series I use, rather than which manufacturer!” adds Becky. “The SD5 had more than enough capability and versatility to help this potentially complex gig run very smoothly. Communication is vital on all gigs, but for this show it was especially important as there were so many different elements to fit together, which is where the internal CON send / receive links came into their own for our talk-around system.

“The versatility of DiGiCo snapshots was also vital for a show like this, allowing me to easily select what I wanted to keep and what had to change completely from one band to the next. We ran an old-school festival style patch which worked very well, and we had a superb stage and RF crew from Skan who kept everything running smoothly and calmly.

“I had a full complement of wedges, radio IEMs, hardwired IEMS and subs to offer the diverse bands whatever they needed, and I was extremely happy with the outcome – there were some very nice comments from the visiting bands about the quality of the sound that the combination of DiGiCo desks, d&B wedges and Sennheiser IEMs provided – and overall I think everyone did a fantastic job of making this complex event come together with consummate professionalism and good humour.”

“We received many complimentary emails following a very successful show,” concludes Skan’s Chris Fitch. “It was a very good achievement by all, particularly considering the time restraints that were imposed.”

I am a long time DiGiCo lover, so it is always a simple question of which of the SD Series I use, rather than which manufacturer. 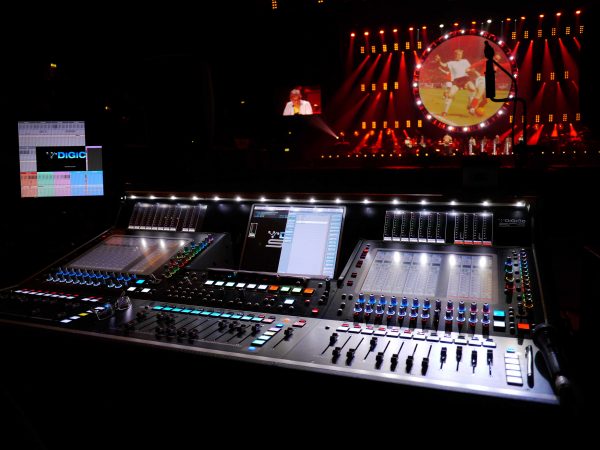 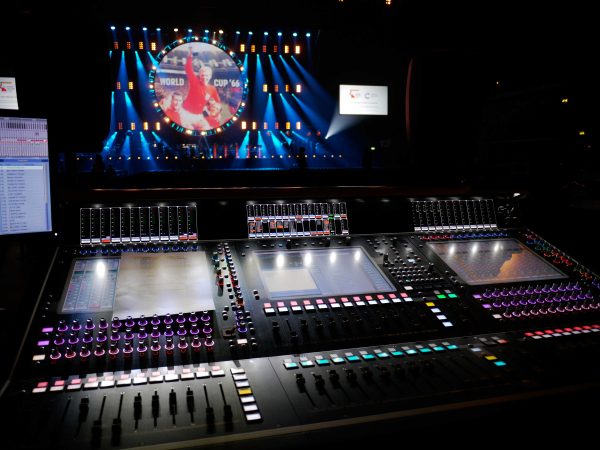 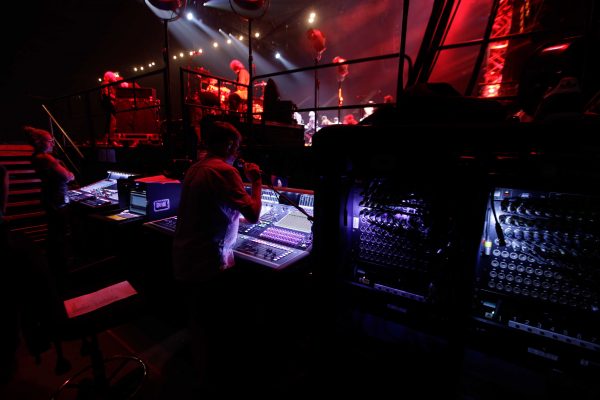