Matt Patterson may have been the RF wrangler/monitor tech for the live dates that Alicia Keys brought to North America from early June to late September this year, but just like the rest of his fellow crew members, his job duties required a lot more than just technical skill.

“This was one of those gigs you can really love,” he says of what was notably Keys’ first major tour in the U.S. and Canada in nine years. “Every day brought a new challenge; you never knew what was coming. For some that may produce undue anxiety or pressure, but I view things differently. Regardless of what you face, there are no problems, only solutions. Approach your job in that fashion and there isn’t anything that can’t be worked out.”

“We considered using CO-12 enclosures,” Sheppell notes, “but we would have had too many issues with rigging limitations and weight. We examined our prospects with the CO-10s using EASE Focus 3D modeling and determined they would work. Sometimes we could have had a little more, but it wasn’t a matter of ‘oh my god this is not enough,’ it was more like ‘wow, these compact boxes really kick some ass.’ I’m essentially a d&b fan, but I had no complaints with the CO-10s at all – I really liked how they sounded.”

Equipped with the Cohesion Series interchangeable Hornserts, which provide adjustment for different dispersion rates to be created on the CO-10s, under Fink’s direction the PA enclosures could be quickly adapted as needed to provide horizontal beamwidths of either 80 or 120 degrees depending upon the needs of the venue, which varied from sheds and large theatres to arenas.

“In some sheds where we didn’t really need the side hangs we’d go with all 120s,” Sheppell says. “Or just put 80s in the top four to throw to the back of the lawn. Coverage was good every day no matter where we were, Leon was a master of tuning, and every other aspect of the audio for that matter. If I would have had to leave the show for some reason, I would have felt totally confident just handing it all over to him because he knew things so well and is so attentive to detail.”

EVERYONE’S ADVANTAGE
Out front, Sheppell’s choice was a Quantum338 digital mixing console from DiGiCo. “My philosophy,” he says, “is that if you’re using a digital console, then stay in the digital realm. I try to do as much as I can onboard, and one of my primary mix goals is to present each song with the energy it should have, giving it everything it needs, but not too much. I don’t want to cloud my mix, especially when I get into tracks.

“With regards to the latter, I find that sometimes when you start pulling things out it works to everyone’s advantage. The audience is always both watching and listening, and video walls give everyone a close-up view. If the crowd is watching someone in the band playing and they can’t hear it in the mix, something is missing. All my mix elements have to be in the right spot at the right time, that’s the goal.”

The system was exclusively digital from the DiGiCo stage rack all the way to the amps in order to steer clear of any unnecessary D/A-A/D conversions. Lake processing in the house traveled via AES and Dante to the amps with analog fallback kept at the ready.

“Every aspect of the system worked very reliably,” Fink reports. “There were no amp or clocking issues. On an operational level the most important tasks had to be completed in the morning. First, we had to get our PA motors in the right spots. Next we made sure our measurements of the venue were spot-on via either drawing the venue from scratch or verifying what we had on file was correct.

“Lastly we had to take the time to crunch all our numbers using EASE Focus to make our predictions. Making a mistake in any of these three areas was not an option. These were the fundamentals that had to be covered for the gig on any specific day.”

Trimming the PA was accomplished with tape measures for height and inclinometers and lasers for up and down tilt. Once everything was rigged and checked to insure that it was in top working condition, tuning took place. Gain shading was done once again with EASE Focus, with the arrays being controlled in groups of two and an option made for controlling high frequency sections individually. Time alignment of all the elements was critical, especially with regards to the phase alignment of the subs in what was a bottom-heavy show. Both Sheppell and Fink managed the equalization process, usually just by simply adding as much EQ as the environment called for.

SYMBIOTIC ORBIT
Keys is gifted with a rich, mezzo-soprano voice with a solid lower register. She has a remarkably powerful chest voice and a penchant for belting out notes, most notably in the fifth octave.

“On the second day out this summer I met with Alicia’s long-time creative partner, engineer and producer Ann Mincieli,” Sheppell recalls. “We went through the show together and based upon her input I would basically add a little EQ and multiband compression here and there and store each song with that voice. Once I setup these snapshots of the vocal color, I never did any correction for a song anywhere else. I could use her stereo vocal group for room correction, then do de-essing with Waves F6 and clean up any muddiness in the lower registers. If ever a song needed some air, I had everything to make that happen right at hand, plus I was able to provide her vocals with a high level of consistency on every song night after night.”

Monitor engineer Glendinning concurs with Sheppell when it comes to describing the sonic horsepower Keys’ voice has when she calls upon it. “There’s no question she can give you plenty of level,” he says. “I’ve done solo shows with her

and I can almost hear her acoustically singing over the PA. OK, I’m standing over at stage left right behind her, I’ll give you that, but her voice can be so powerful that you have to strap on a seat belt, buckle up and just hang on. There’s never a reason to really open up her mic capsule and worry about picking up wash coming off the rest of the stage.”

Working behind another Quantum338 digital console within his stage left workspace, Glendinning presided over a wireless universe within which Keys and her band found themselves locked in symbiotic orbit with components from both Shure and Sennheiser. Backing vocals were all captured with Shure Axient Digital AD4Q systems, while Keys made this summer/fall leg of the tour a time to change to a Sennheiser EM 6000 system for her vocal using an MD 445 supercardioid capsule atop her handheld transmitter.

Shure is at the helm of Glendinning’s in-ear monitor blueprint, with PSM 1000 systems being the choice for everyone onstage using P10R+ bodypack receivers. Keys has employed JH Audio 13V1 earpieces since their inception and continued to do so on this tour. The rest of the band plugged in to their respective PSM 1000 systems with JH Audio Roxanne monitors.

“The P10R+ packs are new for us this year,” Glendinning notes. “Battery life is better, and now we have volume locks, which is a crucial factor for Alicia given her high level of activity onstage. She roamed freely not only on the main stage, but on a B stage each night as well. The B stage on this tour really represented yet another world unto itself. It was in a different location virtually every night, and one that always had us facing myriad challenges. As much as I relied upon integrated automation, snapshots, and recall, this was not the type of show where I could ever leave my desk.

“Having a large capacity for human reaction at the console was vital and had to be maintained at all times. That’s why it was nice having Matt on my side. Anything RF that came along, he was on it and made sure it was a non-issue. There were many times things became threatening and I didn’t even know about it because he had it under control so quickly.”

ADVENTURES WITH WIRELESS
RF in a general sense is always a problem for Patterson. Anyone whose job it is to regularly fit the wireless needs of an entire band onto one or two frequencies has, out of necessity, to be capable of putting stress into a Zen-like headlock and hiding it away. “For me,” he explains, “the real challenge on this tour was what I referred to as the ‘and then.’ That was when someone

would come to me and say ‘we are going to do this today, then that, and then…’ Many ‘and thens’ revolved around the B stage placement, or a sudden need to accommodate 60 choir members and various guests. Every day I was adding this, eliminating that, and seeing how far removed we could get the B stage into the hinterlands.

“One time the B stage was so far out in the lawn at a shed that I could barely see Alicia’s tech. He was waving at me with a look in his eyes like a deer in headlights, asking if I thought this could possibly work. I told him I didn’t know, let’s see what happens, we might need a cable stretcher at minimum. We kept moving antennas, trying everything, and it did work, we didn’t have any issues. And then we went on to the next venue. I really enjoy these challenges. Who, after all, wants to do the same thing every day and never have to think outside of their comfort zone? This isn’t a robotic assembly line.”

Patterson reports that on this outing true RF “hell zones” ranged from miserably bad in Toronto to dreadfully lousy in Boston right on up to absolute worst on the planet in Chicago. “In Chicago there were two channels open, if that,” he recalls. “I had to tell some people they were going to be hardwired that day and share all the RF right from the opening act right through Alicia’s show. Normally we had 40 to 42 channels of wireless. But that day we had 22.”

Armed with a Signal Hound spectrum analyzer plus a Surface Pro 7 which he used in the morning to scope out the RF landscape, Patterson worked with Shure’s Wireless Workbench to deploy his gear and sync everything up. “It integrated with everything except the Sennheiser stuff,” he explains, “and we didn’t have much of that. We were always crushing on time and the Workbench let me sneak things in and get everything going quickly – my workflow wouldn’t be nearly as fast without it.”

Everyone on the crew reported that there was an unrivaled esprit de corps among the troops and leaders. “I’ve been in many high-pressure gigs and know firsthand how easy it is for some people to start yelling at each other,” Patterson concludes. “But it wasn’t like that on this show. We all respected each other, worked together, knew the overall tasks at hand, and got the job done.

“I like to jump into fires with people that share those attributes. You get to see how others troubleshoot and resolve difficult problems quickly, and even make fast friends that you can count on going forward. If you have to travel demanding paths, it’s good to know you’re with people who can lead you safely along the entire route.” 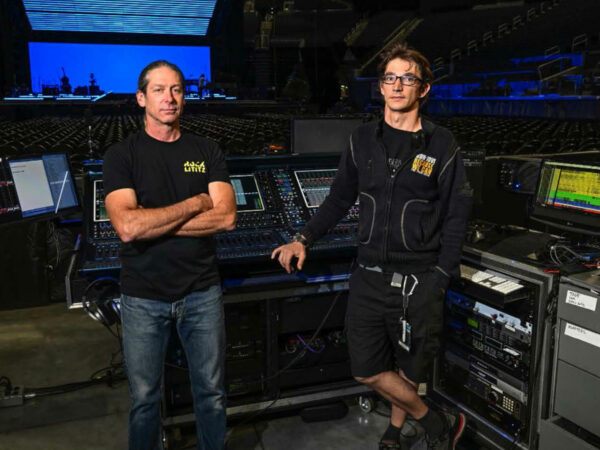 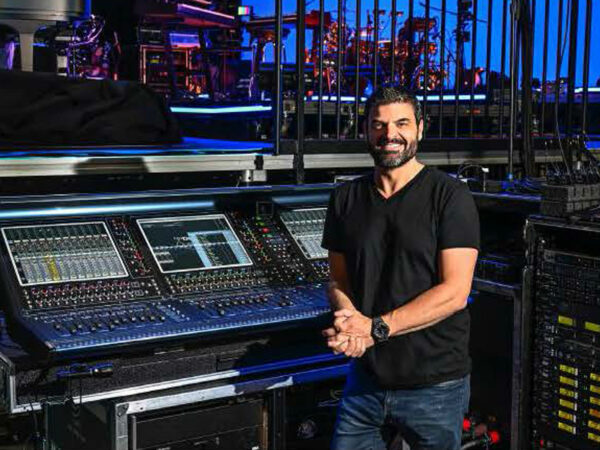 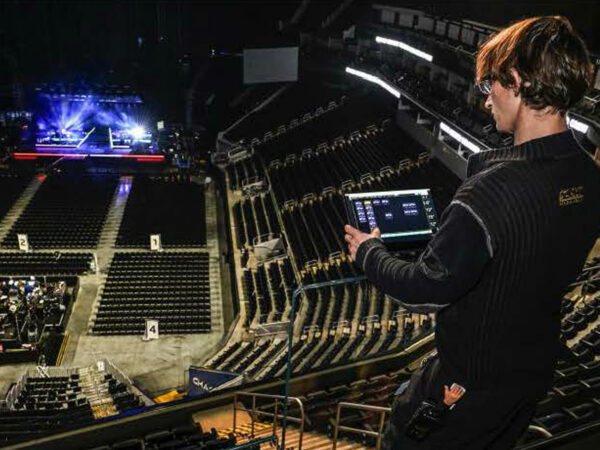 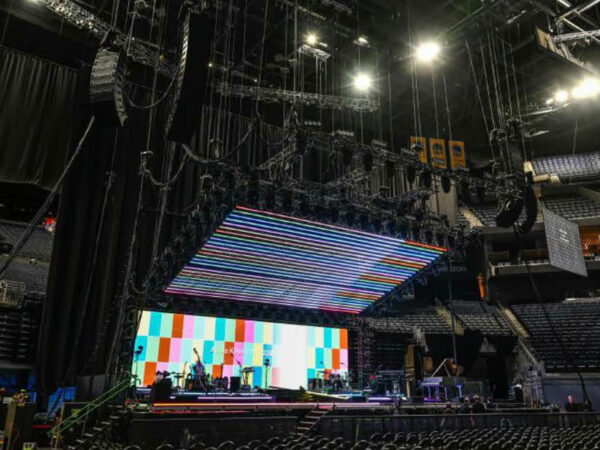 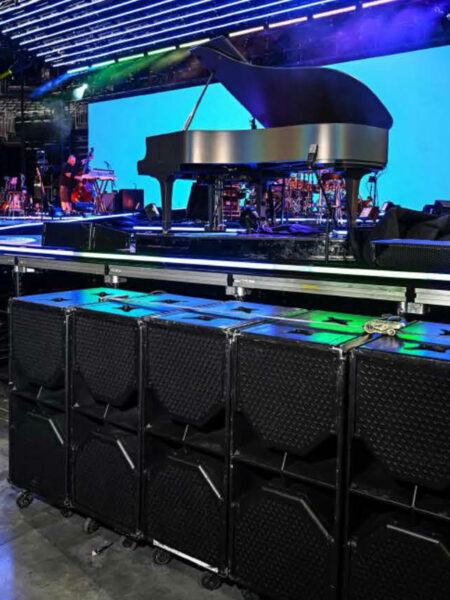