Formed in 1976 and with almost two million records sold to date, Eppu Normaali – named after the character Abby Normal in Mel Brooks Young Frankenstein - is Finland’s best-selling band. To accommodate the needs of this powerhouse of Finnish rock, Front of House engineer Mikko Engberg chose a DiGiCo SD12. Purchased through Audico Systems OY, DiGiCo’s Finnish distributor, Engberg declares that the console’s substantial ‘torque’ is more than enough to handle the band's full effect processing, negating the need for external FX.

Engberg is an icon of engineering in the Finnish music scene. He first got to know DiGiCo when the manufacturer introduced the SD9 to the market. And he liked it.

“I initially used the SD9 with Eppu,” he recalls. “It served me for a long time and was very reliable. However, using a bigger console had been on my mind for some time, and the decision was finally sealed by Eppu’s extremely busy summer of 2019, which resulted in dozens of gigs.

“Although Eppu Normaali is an old school band with no drum machines, clicks or HD tracks, with the number of input channels coming to less than 30, I wanted to have a console with more features. Two big screens as standard was also important to me. As far as I was concerned, DiGiCo was the only option; it’s the fastest, most reliable and most familiar tool for me.”

With the DiGiCo SD12 meeting Engberg’s stringent criteria, he wasted no time completing the purchase.

“From the start, Engberg was fascinated by DiGiCo’s easy-to-use, logical user interface,” says Audico’s Pauli Molnar. “The SD12’s flexibly moulds to the user’s desires and does not impose any restrictions on surface modification, which was perfect for Engberg.”

Over the summer, Eppu Normaali played around forty shows, with the SD12 deployed on every one.

“And its so reliable’,” smiles Engberg. “That’s why I use it and trust it. I have never had a bad experience with DiGiCo and if there is ever a problem, the reason is usually a user error.”

As Eppu Normaali does not tour year round, Engberg has also been busy with Finland’s most popular television music programmes, such as Dancing with the Stars, SuomiLOVE and Voice of Finland. He notes that in live television production, the number of inputs required has increased from season to season.

“If I continue to do TV work with my own equipment, I’ll probably upgrade to the SD12 96,” states Engberg. “And if I use my own equipment, of course the console is always the SD12. If the gear comes from the production company, I always ask for DiGiCo. Luckily, I was able to do all these productions with DiGiCo.”

Engberg says that another important reason for upgrading his equipment, besides the console itself, was the rack – Engberg’s DiGiCo package includes a D2-Rack with 48 analogue inputs and 24 outputs.

“The outputs were increased with an eight channel card to make the system more usable, for example, for monitor mixing,” he says. “There is also an AES card, which enables me to drive the amps digitally.”

The SD12 also has 12 built-in effects and, with his new console, Engberg no longer has analogue compressors or external hi-fi plugins, with all dynamic control and effects internal to the console; for Engberg, the console itself provides enough power and quality for all effects processing.

“But the same time, risks must be minimized,” he adds. “I want the system to be as stable as possible. I had a bit of a bad experience with outboard equipment in the past, so I no longer want front-end external hardware.”

Engberg praises the user-oriented ergonomics of the two 15-inch touchscreens. Among the versatile additional dimensions offered by the back panel of the SD12 are two MADI ports and DMI slots. For TV productions, Engberg has filled one of the slots with a DMI-AMM card, which has provided unparalleled support for the vocals, which he had previously handled with a Dugan Automixer.

“DiGiCo now has its own Automix solution, which I was able to use for the first time on Voice of Finland, and it seems to work well,” he declares.

Having taken care of Finland’s busy autumn TV season, Engberg and his SD12 once again hit the road with Eppu Normaali, playing arenas from Kuopio Hall to Hämeenlinna Verkatehdas during November and December, closing a busy and successful year with a sold-out headline performance on Finland’s Independence Day in Myyrmäki Hall in the city of Vantaa, just north of Helsinki.

"From the start, Engberg was fascinated by DiGiCo's easy-to-use, logical user interface" says Audico’s Pauli Molnar. “The SD12’s flexibly moulds to the user's desires and does not impose any restrictions on surface modification, which was perfect for Engberg.” 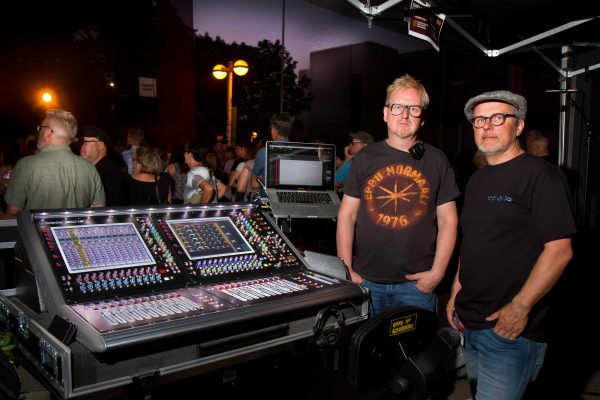