Opened in 1935 in the Polish capital of Warsaw , Teatr Muzyczny Roma was one of the city’s few buildings to survive the World War II and has been used as the meeting place for the State National Council, the Warsaw Philharmonic Opera and the Warsaw Operetta and has been a home for musical theatre since 1994.

Over the past 10 years, it has seen DiGiCo’s Polish distributor Polsound involved in various technology upgrades, initially installing a DiGiCo SD7T and a new Meyer Sound PA to address various issues the theatre was experiencing.

“The theatre’s General Manager, Wojciech Kępczyński, has a real vision for theatrical forms,”explains Polsound’s Pawel Danikiewicz of Polsound. “He is one of the most successful directors when it comes to introducing the typical musicals we have today. He is among the favourites with the composers and the writers.”

“For example with Cats, Andrew Lloyd Weber liked this version here in Warsaw the best. When he puts on a musical he want to portray it as close to reality as possible for the audience.” Sound Designer at Airpol Sound & Light, Krzyszt of Polesiński added:“Wojciech also asks for the license for the musical, so he can design and present it in his own way using his own ideas, which then has to be approved by the owner of the musical.

Once it’s approved, it is stamped as being a none-replica version, meaning nobody else can recreate the Warsaw version. One comment we always get is that the Teatr Muzyczny Roma is adapted to the musical, not that the musical is adapted to the theatre.”Krzysztof too, has a long-standing relationship with Teatr Muzyczny Roma, he has been upgrading the audio setup for more than 10 years.

His involvement means he has a good understanding of the venue itself;he gets on well with all the staff that work within the theatre, and of course Wojciech, too. Most general managers are in his position for three-to-five years-a role that is appointed by the city mayor-but the fact that he has lasted 20 years is a true testament to his expertise and success. Under his guidance, Teatr Muzyczny Roma has presented 18 musicals in 20 years including some of the greats, such as Les Miserable, Cats, Mamma Mia, and Phantom of the Opera-the latter being the longest running show with 572 performances. The most recent show, The Pilots,ran for 427 performances, and the next to begin is Elton John and Tim Rice’s, AIDA. Teatr Muzyczny Roma is similar to a Broadway theatre, in that it only runs one show at a time.

With a strong reputation to uphold, it won’t come as any surprise that the theatre has undergone a continuous upgrade of audiovisual packages. However, there has been a significant audio upgrade of late that pushes the boundaries of theatres in general,but definitely within Poland-there is currently nothing else like Teatr Muzyczny Roma from a technology perspective.

Having already installed a new Meyer Sound PA system,Krzysztof and the management team of Teatr Muzyczny Roma decided to replace the mixing consoles and this was the real game changer!

DiGiCo SD7Ts were selected for Teatr Muzyczny Roma as the main criteria was to have full redundancy. “This is one of the reason we chose SD7T to begin with, as it has a dual engine,” Krzyszt of explained.“It also has the specific theatre software, which is really good for musical theatre productions and it is the console that is on 80%-90% of riders, as the number one console. Management came to the first show after the DiGiCo desks had been installed, and the response was to encourage people who had seen the show before, to come again. The sound had changed so much, in a good way.It was a positive sign for me too–my design worked well.

“For FOH we have the SD7T with an EX007 console expander, the latter stems from the previous mixing setup and the mixing engineers being used to having a certain amount of faders, because in order to control 40 wireless mics on one layer, the engineers wanted as much access as possible, for occasions when there is a fast change, for example. I added an expander, on which they have the orchestra in the groups that allows the song list to be on the main console,as well as some effects, surrounds and media servers.We decided on another SD7T for monitors, again so we had more redundancy, if one engine fails, the other can take over.” In addition to the consoles there are two Waves Sound Grid servers per console-two Extreme servers for FOH and two server ones for the monitor console, one on each engine-and there are ProShow plugin bundles,too.

He added: “The console is the heart of everything and controls everything-this was one of my principles. Some productions that come through the theatre bring their own console for monitors, but then when they see the DiGiCo set up they decide to use the fullin-house system. I’d say 60%-70% of the productions use the installed system.”

The theatre is also home to four DiGiCoSD Racks-one for radio microphones,two in the rack room connected directly to the orchestra pit and the final one is a spare, used for external productions.“Because we don’t always use all the rack space, we also have connection for the media server, the light signals, and the Meyer Sound D-Mitri platform. For this we added some OptocoreX6R-FXdevices, which gives us more inputs and outputs to and from the system,”

Krzysztof furthered. “I also added an Optocore Route 66 Auto Route, which opens the Optocore loop automatically when a device is connected. Likewise when you disconnect, it closes the loop.With the Route 66, you can change the topology of a loop installation, to a star topology installation. I am very impressed with this device, all you have to do is turn it on and forget.”

With the mixing system established as a roaring success, management at Teatr Muzyczny Roma wanted to continue the momentum and push the technology boundaries even further with the introduction of 3D audio. For this,Krzysztof returned to Meyer Sound. The design of the surround sound system means Krzyszt of can not only move the sound from left to right, but also near and far, and he can elevate the sound, too.

“When we look at the Meyer Sound PA and the DiGiCo consoles, this a system that can produce a very wide dynamic range, and reality goes with dynamic range. If you have a really big dynamic range throughout then the sources also need to offer the same range. The Shure ULX-D digital wireless systems have over 120dB of dynamic range, which means for us, that these systems have a near none existent noise floor. This has created, a sort of paradox problem because all of a sudden the quality of the microphones is immediately visible. In the past, analogue systems have had an inherent hiss sound, but if the microphone was noisy it generally got drowned out in the rest of the noise from the theatre. But now, the system is so clear, you can hear absolutely everything!” The quality and the features offered by the digital system though, of course, greatly outweigh the paradox problem.

In-keeping with a state-of-the-art system,lighting and video technology at Teatr Muzyczny Roma is of an equally high standard.This setup, along with anything else technology wise is under the leadership of Technical Manager, Anna Was. She said: “I love technology and I want to make big improvements in the theatre all the time. I love similar people who share a love of technology and deliver to the end user.”

Anna has an eye for detail, especially given that she is also a costume designer in her spare time, and she assumes that role for many of the theatre shows, too.In additional to her visual equipment,Lighting Design, Marc Heinz also specified a number of moving heads and theatrical lighting fixtures for Anna’s disposal. Anna’s creativity can be seen through the visual presentation of any show,but in turn she admits, audio isn’t her strong point.

“I don’t understand sound because it’s invisible, but Krzysztof and Arek are my sound gurus, so we work well together. I trust them with the technology, the designer and I took a trip with them to London to see a number of UK theat resand saw DiGiCo consoles everywhere,which gave me a reason to make the pitch for them back here at our theatre.”

Krzysztof had the final word: “This is the most advanced theatre in Poland, andpeople are now asking for similar designs because they have visited Teatr Muzyczny Roma, and were so impressed that they want to offer the same. We won’t recreate exactly what we have here, but people can see the technology advances and want to follow the trend.”

This is one of the reason we chose SD7T to begin with, as it has a dual engine,” Krzysztof explained. “It also has the specific theatre software, which is really good for musical theatre productions and it is the console that is on 80%-90% of riders, as the
number one console. Management came to the first show after the DiGiCo desks
had been installed, and the response was to encourage people who had seen the show before, to come again. 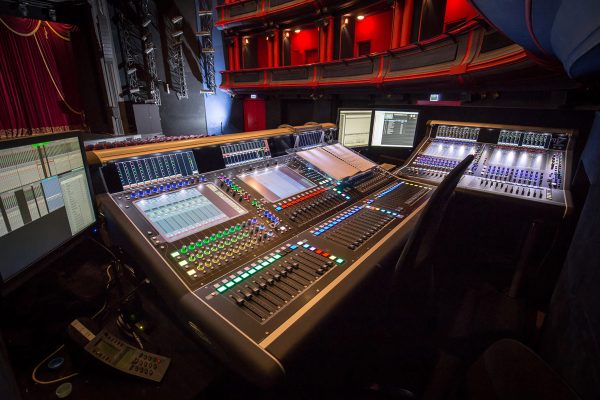 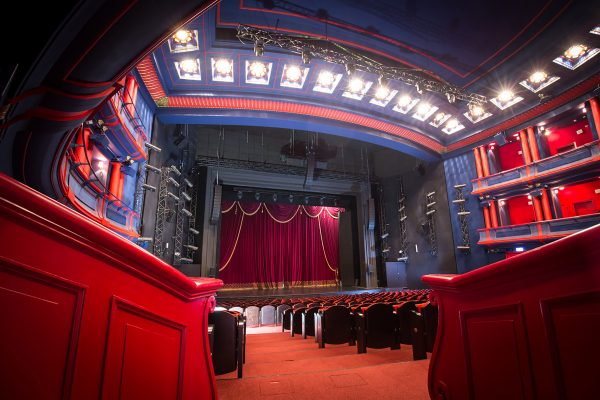 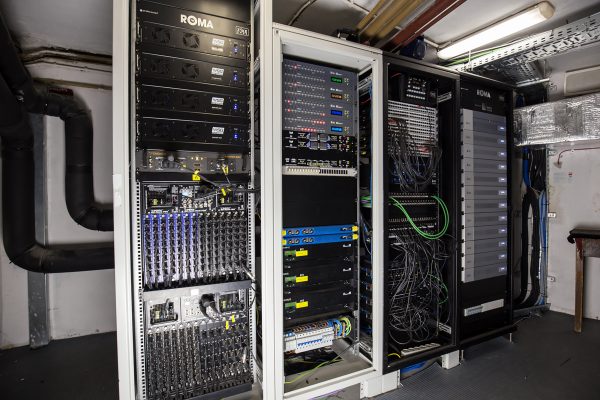 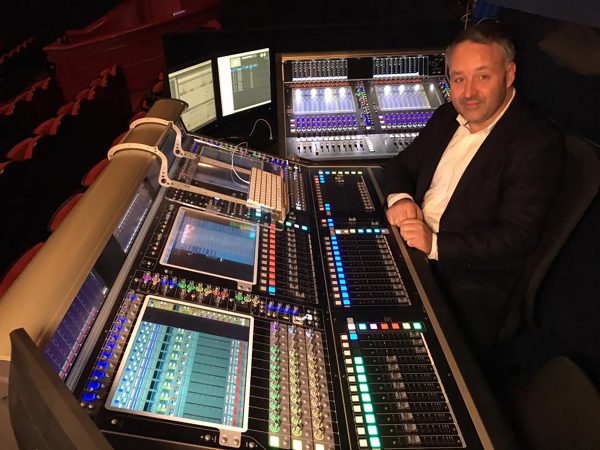 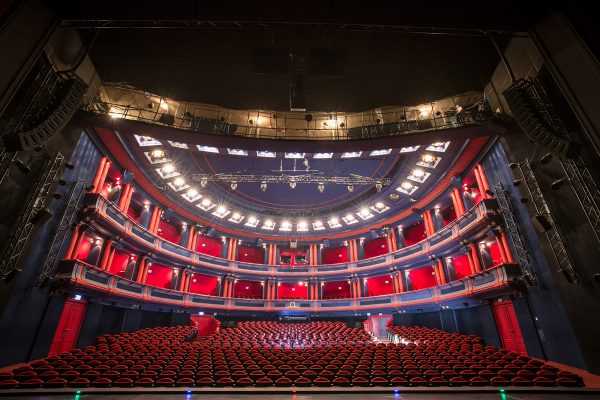