LITITZ, Pennsylvania - April 2017 - Aerosmith is currently preparing for its upcoming global tour, dubbed “Aero-Vederci Baby!”, which will kick off in Israel on May 17. For the journey, Clair Global will be carrying the usual DiGiCo SD7 consoles for both FOH and monitors, with the addition of a shiny new DiGiCo SD12 in monitor world.

LITITZ, Pennsylvania – April 2017 – Aerosmith is currently preparing for its upcoming global tour, dubbed “Aero-Vederci Baby!”, which will kick off in Israel on May 17. For the journey, Clair Global will be carrying the usual DiGiCo SD7 consoles for both FOH and monitors, with the addition of a shiny new DiGiCo SD12 in monitor world. One might be tempted to assume that the smaller desk is merely a sidecar, but Monitor Engineer Travis White is quick to point out that that would be a huge mistake. “It’s doing a lot more than your typical sidecar,” he says.

Everything about the Aerosmith world is a mix of seeming contradictions. They are a rock band of towering stature, some of whose biggest hits have had a decidedly pop leaning. The singer has moved seemingly effortlessly between being a rock god and a reality TV star. And when it comes to this next tour, almost the entire band will be on in-ear monitors—yet there is something in the neighborhood of 36 wedges “set to stun.”

“They are all for Joe [Perry, lead guitarist],” White reports. Occasionally, fellow guitarist Brad Whitford will eschew in-ears and go with the wedges, but they are there for Perry, the only member of the band who does not use IEMs at all.

“Trying to EQ an input being output both to in-ears and wedges is a giant compromise that I am just not willing to make if I don’t have to,” White says, noting that he is more likely to double and even triple-up on input channels for a specific source in order to treat it in the best way possible for the intended output. “Take something as simple as a kick drum. Steven Tyler wants a big, hi-fi sounding kick like it is on the CD, while drummer Joey Kramer likes a little more high-end click in his mix, and neither of those sound great in Joe’s wedges. Running separate kick channels for each of those outputs works best.”

At the other end of the snake, Clair Crew Chief and Aerosmith System Engineer Randy Weinholtz notes that the SD12 is one of the few consoles of its size that can do everything they need it to do in this setting. “At the end of the day, it’s an SD console,” says Weinholtz. “The only significant difference between that SD12 and the big SD7s in the main monitor position and at FOH is the number of inputs and outputs and actual faders. In terms of ability, EQ and overall operation, we lose nothing with the SD12.”

The mix of output types and sonic needs of band members are not the only complicating factors. Weinholtz does the house mix for Tyler when he is doing solo shows, and White has been Tyler’s monitor mixer for those shows as well as the past two Aerosmith tours. But on this next tour, White is the one flying solo. Well, almost. The Aerosmith gig has long been one that demanded two monitor engineers and White has been the one caring for Tyler while someone else concentrated on the band.

“Going it alone is complicated,” White describes. “Steven does not want a typical monitor mix. He is pretty adamant that he wants a full-on, stereo, sounds-like-the-CD mix in his ears every night. I really mix him much more like I would if I were running FOH than a normal monitor mix.”

White does have some backup in Kory Lutes, his Clair system tech. “He’s my second set of eyes. I spend a lot of time really focused on providing Steven with the kind of mix he wants, going as far as riding faders on some inputs. So if, say, Brad decides that he is going to take his ears out and move away from his area onstage, I need to know that is happening so we can pull up Brad’s mix in the wedges in the zone he is occupying at that moment.”

Pop successes aside, in a career that has spanned nearly five decades, Aerosmith is not a band that is noted for compromise. “They don’t compromise in their music and they do not want to compromise in the sound of their shows—nor should they have to,” White says. “Especially when it comes to working with Steven. This is not a guy who shows up, does the show and leaves. It is a relationship. He trusts that not only am I able to give him what he wants, but I can often anticipate it and make the change before he asks for it—or maybe before he even knows he wants it. In order to be able to fulfill these expectations, I need to be able to depend on my tools to the same degree that these guys depend on me. I wouldn’t try to do this gig with anything other than a DiGiCo. The SD12 has made it possible for us to do this next tour with only one monitor engineer and not have the band notice that anything is different.”

The SD12 represents the culmination of everything that DiGiCo has learned over the last 15 years and encapsulates the best features of both the SD and S Series. Utilizing the latest generation of Super FPGA, it is compact in size, but delivers the power and capability that is now synonymous with the manufacturer’s desks. A few of the console’s many standout features include dual 15-inch digital touchscreens, DiGiCo’s famous Hidden Til Lit (HTL) encoders, an assignable Master section, and two built-in slots for DMI cards.

For a list of Aerosmith’s Aero-Vederci Baby! tour stops, visit www.aerosmith.com. Clair Global can similarly be found online at www.clairglobal.com.

At the end of the day, it is an SD console. The only significant difference between that SD12 and the big SD7s in the main monitor position and at FOH is the number of inputs and outputs and actual faders. In terms of ability, EQ and overall operation, we lose nothing with the SD12. 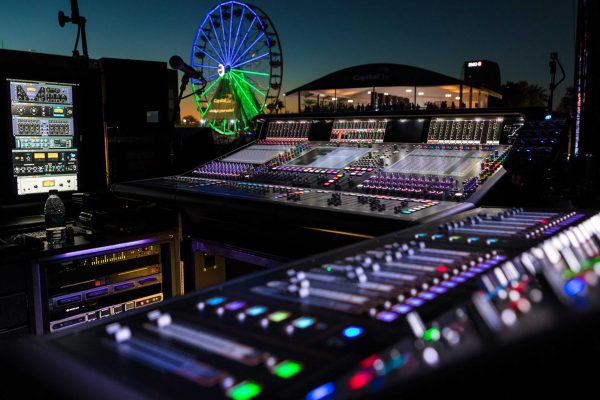 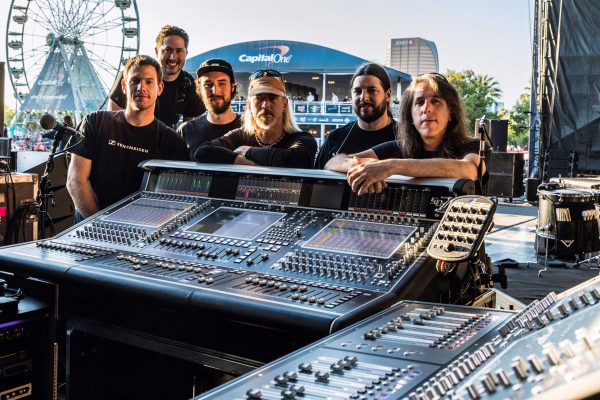 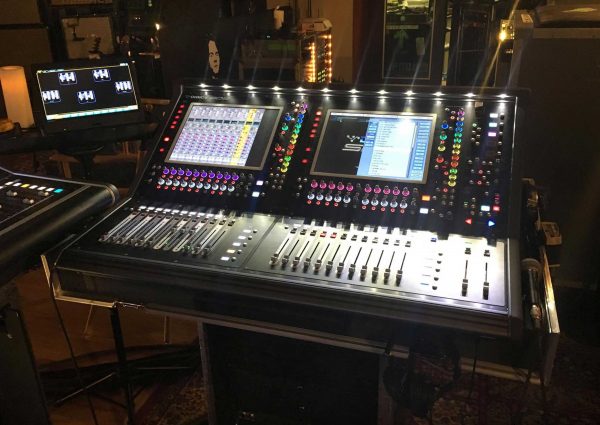