Britannia Row Productions deployed a full audio package for the annual hybrid multi-act concert and coveted awards ceremony while continuing its partnership with The BRIT School.

Britannia Row’s relationship with the event continues to go from strength to strength, with the company’s Josh Lloyd resuming his role as System Designer and FOH Mixer. Lloyd carefully created a PA system design that would allow the music to blend effortlessly into the stage design by avoiding key sightlines, while giving clean and clear feeds to the experienced broadcast team.

“The design changed in the weeks leading up to the event due to the stage and seating being reconfigured in the venue, which in turn meant that I had to move the system out so as not to cover the stage runways,” notes Lloyd.

Alongside the main L-Acoustics K1 hangs, Lloyd chose K2 for the side hangs due to “their ability to control the directivity horizontally.”

L-Acoustics SB18 and KARA II were used for rear hangs while four K2 delay hangs were placed throughout the venue, with boxes of A15s used as flown infills. Cabinets of KS28 were deployed as flown centre and ground subs with A10s for infill. The system was powered by L-Acoustics LA12X amplifiers.

Lloyd continues: “The system was modified and optimised for the best possible results, achieving consistently even coverage in the room with a design that was sympathetic to the large video screens and the full visual aesthetic of the show.”

Despite the complexity of the task before them, Lloyd confirms that the Brit Row team were more than happy with this year’s design.

“We’ve had such positive feedback on the system from everyone, despite it always being a real challenge to execute a large format concert for a TV show,” he says. “I’m surprised each year that we manage to find ways to improve what we can offer to the BRITs audience!”
Lloyd also maintained his role at FOH, mixing incoming performers on a DiGiCo Quantum7. DiGiCo were the only desks used throughout the entire event, a decision Lloyd explained came down to the flexibility of DiGiCo. “There is no other console out there that’s as flexible for a busy show like this.”

“I’m always happy when I find out the house desk is a DiGiCo as I know that the file that I send over will be integrated perfectly,” he says. “I like having the ability to move things around quickly without any fear of something going wrong, and they sound great! I definitely have no intention of trying anything else, as the desks do everything I want.”

Successful applicants Rhys Barratt and Hannah Woosnam-Savage were welcomed into the Brit Row camp as part of this year’s programme and working alongside Brit Row’s crew, were able to see first-hand what it takes to provide audio to a show of this scale.

Woosnam-Savage comments: “It was an amazing learning experience and taught me so much about live large-scale productions. In the warehouse I helped to build racks and prepare equipment for the show. Once everything was prepped, we went through line checks and got to use the SD7s, which was very enjoyable, as I have never used that sound desk before.

“At the O2 we helped build and fly the PA and ran cables under the stage. We also got the chance to sit through rehearsals, sound checks, and observe the FOH engineers working the show. This was very useful as this is one of my interests within sound, and where I want to focus.”

Barratt also enjoyed his placement: “Working with Brit Row was an amazing experience, it allowed me get a further look into everything which goes into producing the sound for an event of this scale. Working within the warehouse was particularly interesting – prepping equipment which we usually wouldn’t have access to and building the custom racks with the plans.

“Stripping down the band risers really demonstrated the speed at which the event moved backstage with the extremely limited time available, and the high quality crew from various companies all working towards the same goal. The experience has served as a huge steppingstone in my future career, allowing me to gain an incredible insight into the depths of how these events run.”

“It must be daunting for any 18-year-old to come into a busy work environment, but they did amazingly well,” confirms Lloyd. “Having Hannah and Rhys with us also fits well into the overall Brit Row ethos of nurturing new pro audio talent.”

Coordinating the radio systems for the BRITS was Head of RF, Lucy MacKinnon, who specified 26 ways of Sennhieser 6000, 12 ways of Shure Axient Digital, 34 Sennheiser 2000, and four Shure PSM1000 IEMs.

“The BRITs is a huge milestone in my live sound career, more specifically as an RF Engineer, as I came up through Britannia Row Training myself,” says MacKinnon. “It was incredibly important for me that every engineer who came in with the various performing artists went into the show confident in the RF that was provided for them.

“Nowadays, wireless mics and artists on IEMs are incredibly common and the show depends on it. The UK is also very strict with licensing and therefore the challenge of coordinating over 120 channels in a very limited spectrum space required a lot of hard work.”

An additional challenge for MacKinnon was the change of requirements and extra RF kit being brought in by artists.

“Once I’d calculated an initial plot and the show started to settle, everything began to fall into place,” she explains. “The Britannia Row crew working alongside me were fantastic, in particular Adrian Roche, who dealt with all the line checks and handling of RF mics and IEMs. This, along with the high quality kit and an amazing rack design built solidly by the warehouse staff, ensured that the whole show ran smoothly from start to finish.”

“I’m always happy when I find out the house desk is a DiGiCo as I know that the file that I send over will be integrated perfectly. I like having the ability to move things around quickly without any fear of something going wrong, and they sound great! I definitely have no intention of trying anything else, as the desks do everything I want.” 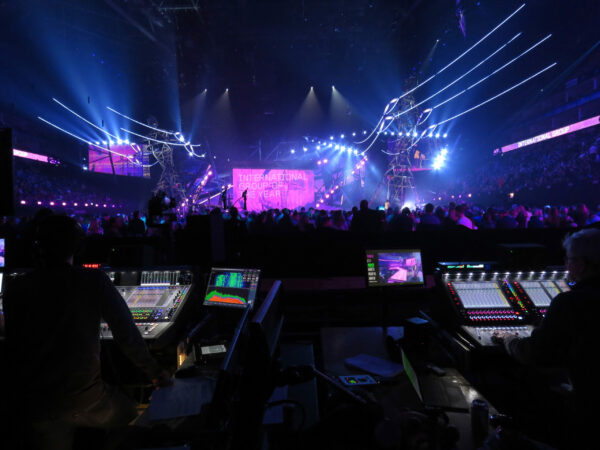 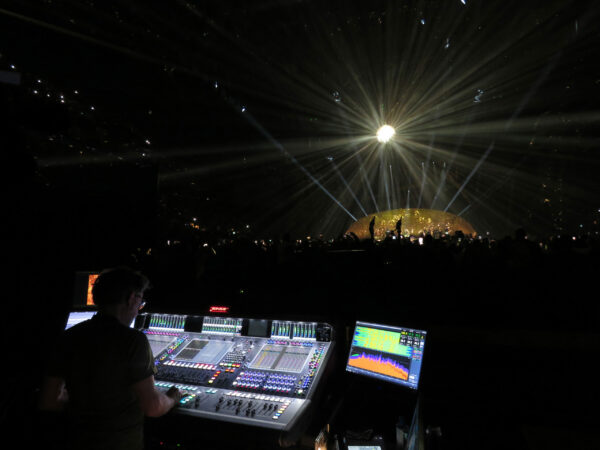 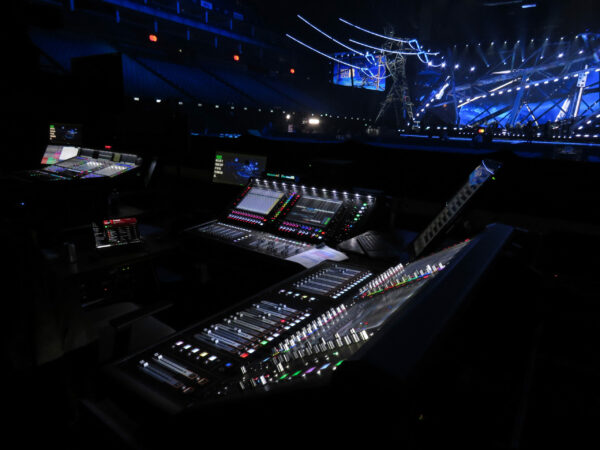 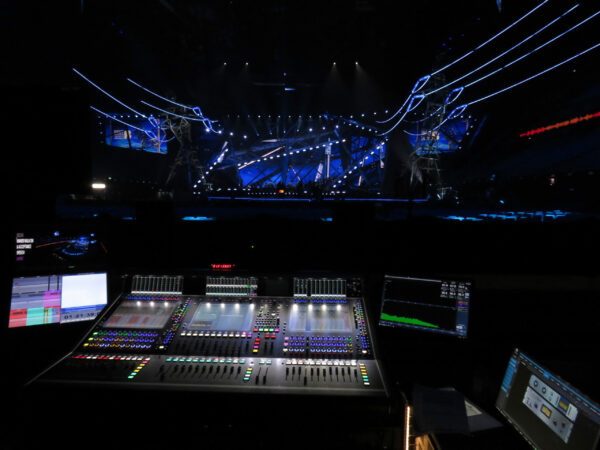 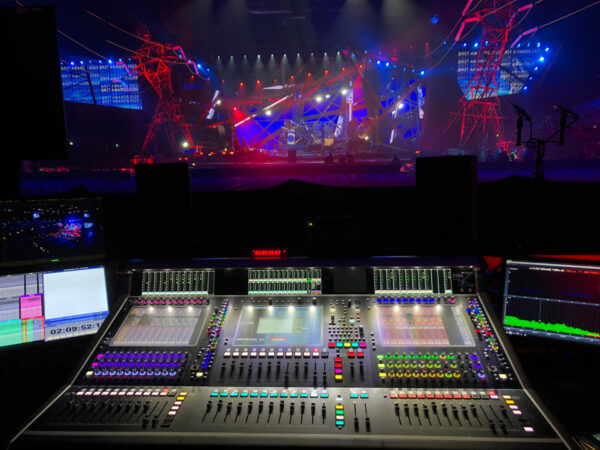 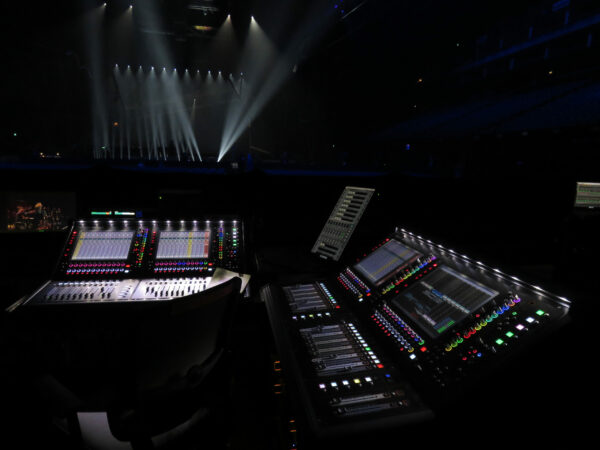