Since 1997 Britannia Row has masterfully deployed audio requirements to MTV’s Europe Music Awards. This year’s winners included Artist of the Year - Ariana Grande, Best Live - BTS and Best Song - Bad Guy by Billie Eilish, all of whom were honoured in a live televised ceremony staged in the Andalusian capital of Seville.

MTV has trusted Brit Row to supply the event for over two decades, creating a strong level of trust and reassurance during planning, pre-production and the live show. Supplying an L-Acoustics PA rig, Sennheiser mics and IEMs, and a plethora of DiGiCo SD7s (monitors), SD5s (FOH) and SD12s for presentations, the 14-strong Brit Row crew delivered once again.

“They’re the best in the business; a lot of artists feel comforted when they come to perform and see they’re in the hands of Brit Row. For 22 years, they’ve never let us down,” commented Andy Derbyshire, Production Executive, MTV EMAs. “This is MTV’s biggest annual awards show outside the USA, so it’s of critical importance that its technically delivered to the highest level possible.

“We have major artists on this show, and there must be zero compromise with audio. We require the pinnacle of service, and for sound, this directs us to Brit Row. Their professional delivery, crew quality and crew continuity is imperative in making the EMAs a success.

Live performances included routines from Dua Lipa, Niall Horan and R&B / pop star Mabel, whose monitor mix was in the capable hands of Rod Clarkson. He said: “Having worked on the EMAs several times before, I’m acutely aware of the massive audience exposure and therefore the high expectations for any artist performing, so it’s always comforting for me and my artists to step up towards supremely well-prepared kit, along with an experienced and unflappable crew.

“I used a house SD7, and straight away, I knew Live Sound Supervisor Colin Pink’s monitoring team of Dan Ungaretti and Wayne Sargent, had gone that extra mile to make things straightforward and flexible – even with line-up and show changes happening right up to the last minute.

“Our pre-camera rehearsal soundcheck was always going to be very short, yet the skilled assistance of Josh Lloyd at FOH meant we were ready in good time,”

Since 2007, the SD7 – which has evolved into the Quantum 7 – is the desk Clarkson feels most confident operating on. “Its forward-thinking design has developed and expanded with the changing demands of modern productions,” he noted.

“Putting an artist who’s used to handheld microphones on a headset would often provide the monitor engineer with a little challenge, but the standard onboard tools on the SD7 were more than enough to provide control of the vocal for both Mabel’s IEM and the dancers’ L-Acoustics stage monitoring. Having said that, the Cardioid Sennheiser HSP-4 headset sounded great from the word go, so that made things much easier!”

Lloyd added: “DiGiCo is chosen time and again because it’s the most popular console. These desks have the best redundancy and touring engineers are always happy to use them. The Optocore networking comes in very useful for complex integration too.”

The Brit Row crew also had RF duties well in hand. Clarkson continued: “The knowledge of Sapna Patel and Josh Thomas meant we had a well distributed and backed up RF system around an LED-heavy screen-laden stage. On other shows with less experienced providers, I would have RF concerns, however I knew Brit Row would cover this to the highest standard.”

Lloyd furthered: “On a multi band, multi artist show like this, there’s a lot of expectation across the board, in every technical department. A show like this needs big looks for television and the EMAs always look incredible, but the PA design has to fit around its aesthetic – while still achieving even coverage and seamless RF.”

Lloyd designed a highly distributed PA system using a combination of Kara and K2, and boxes of the new L-Acoustics ARCS A15 line source, making this one of the first large-scale projects to use the product. He said: “These boxes are very useful in being able to control the floor because they have exceptional horizontal directivity. I think this is the best-sounding MTV show we’ve ever done!”

Clarkson summed up: “Working alongside Colin Pink and the entire Brit Row team is a pleasure and having always received awesome levels of support both in the UK, Europe and worldwide, I’ll forever be happy to work alongside them.”

DiGiCo is chosen time and again because it’s the most popular console. These desks have the best redundancy and touring engineers are always happy to use them. The Optocore networking comes in very useful for complex integration too. 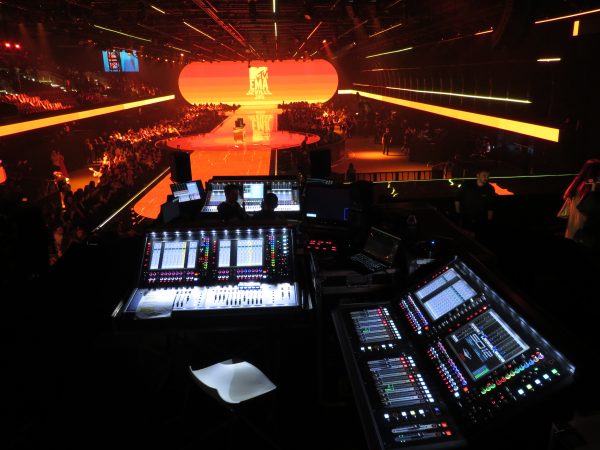 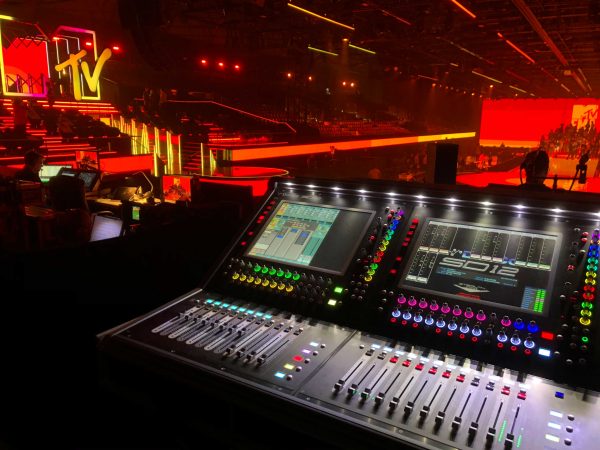 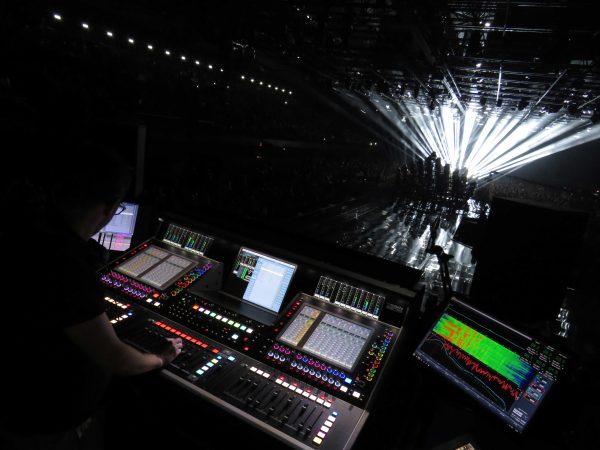