In mid-December, Gorillaz returned to the stage with ‘Song Machine Live From Kong’ for three separate fully live shows performed from the basement of Kong Studios, West London over the course of two days. Over a million viewers in more than 120 countries tuned in to the show via the LIVENow platform, which featured a pioneering mix of animation and live performance.

“We used two Quantum 7s, one ‘FOH’ and one for monitors,” says Dan Scantlebury, head of sound for Entec. “There’s also an SD11i in the loop for playback, three SD Racks and an SD MiNi Rack located at FOH on a separate optical loop.” Entec Senior Sound Technician Peter Eltringham adds: “Now we have the Quantum console’s additional processing, we have the power to run the monitoring systems at a 96kHz sample rate, delivering lower latency and improved sound quality. Dave Guerin has made an iPad app to enable some of the band members to do their own sub-mixes from his console.”

“The drummer and percussionists like to adjust their timing all the time, it’s the important timing bit for them – so you give them that control and they can then also mix a bit of the kit louder, or whatever else they want,” explains Guerin. “My iPad app sends OSC (Open Sound Control) commands to the Quantum 7, the app has a set of faders which control auxiliaries or matrices on the desk; each musician has one of these. As the Quantum 7 only allows for one controlling device per protocol, I also wrote a router iPad app to pass all the data packets backwards and forwards.”

“If you’re going to make a desk like that, then someone’s got to use it,” adds Butcher, who was driving a Quantum 7 for the first time. “And someone’s going max it out! Dave maxed out, and I was pretty close to that. The setup was impressive; the whole thing was amazing. Going in and switching on all that stuff, and then getting the four record machines going and checking the audio in and out – I was looking at the Audio I/O panel, and every light was illuminated – we were using every access point on the console.”

A big evolution for the Gorillaz sound was the simultaneous recording of 128 channels at 96kHz, plus a further 48 channels from a ‘C stage’. A second optical loop was fitted to the FOH console, to deliver sufficient channels, with the primary loop consisting of a massive 490 channels. The recording was used to facilitate extended sound checks, and to provide the option of a post-event multitrack mix if required. “The recording system is also a useful tool if we heard something unusual during a performance,” Butcher observes. “We’d note what track it was in, and if we didn’t find it on the spot, then we could go back the next day and go through forensically, find the problem, and isolate it.”

With limited rehearsal time, the performance had the feel and sound level of a live gig on stage. At the broadcast end, Butcher found the main difference was a gentler monitoring level of 80dBA, mixed using a pair of Genelec 1031A studio monitors. Extensive use was made of the new DiGiCo Spice Rack on background vocals, with the six-band Chilli 6, which allows detailed control of envelope shaping for definable frequency bands, taming dynamics on the master outputs.

There is no doubt the Gorillaz sound team has made maximum use of Quantum’s added power, with Scantlebury emphasising a significant challenge was to make this complex show, using cutting-edge technology, as resilient and road-ready as possible. “The best thing is, it’s all the same DiGiCo ecosystem,” adds Eltringham. “It still talks the same DiGiCo language. So you move over to this twice-as-powerful console – but there’s no big learning curve.”

‘Song Machine Live From Kong’ could be a standard-bearer for socially-distanced live events, offering artists and technicians a model for the future. “Hopefully this will set a precedent that it can be done, in light of the next six months being potentially locked-down as well,” concludes Butcher. “I think it is a viable art-in-media format. I’m lucky to work for such an interesting band, on such an interesting project. DiGiCo built a desk that’s got this ridiculous spec – we’ve got an act that actually requires us to use it! I’m very happy with it.”

The best thing is, it’s all the same DiGiCo ecosystem 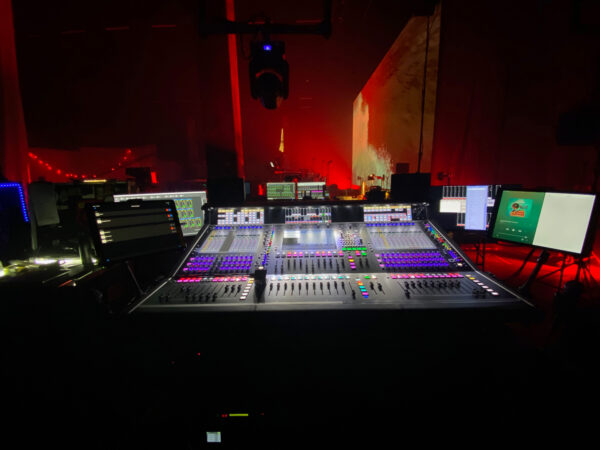 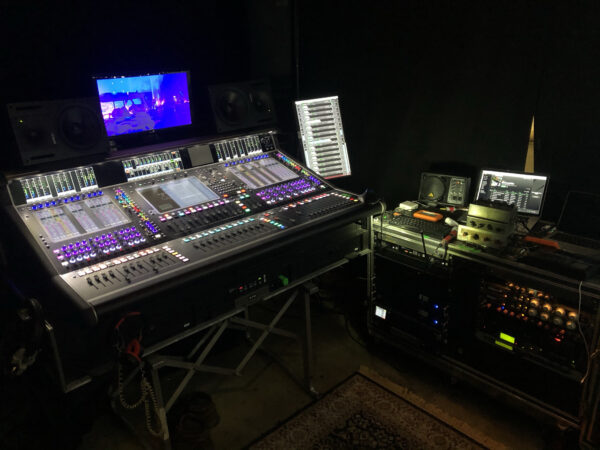