DiGiCo In Demand For Dua Lipa

British-born 22-year-old singer-songwriter Dua Lipa is a serious talent. She became the most streamed female musician in 2017, her mega-hit New Rules is about to hit the 800 million mark on YouTube, and she performed at the BRITs in February.

British-born 22-year-old singer-songwriter Dua Lipa is a serious talent. She became the most streamed female musician in 2017, her mega-hit New Rules is about to hit the 800 million mark on YouTube, and she performed at the BRITs in February. For the last year and a half, FOH engineer, Will Nicholson, and monitor man, Alex Cerutti, have used their DiGiCo SD5 and SD12 consoles respectively to ensure everything audio is working out just as well.

It was a very strong 2017 for Dua Lipa, confirms Will Nicholson, who has a previous working relationship with the artist’s production manager, Pete Abbott.

“We worked together on Icona Pop, and a couple of smaller artists; also, [musical director] William Bowerman is a friend of mine, so when Pete gave me a shout to see if I was interested, I was keen to get involved,” he says.

Nicholson has been a DiGiCo user for five years and says the scalability of the SD range is ideal for his FOH workflow.

“Modern pop touring is often characterised by two significant factors: time and budget,” he explains. “Whilst I haven’t had to make use of the smallest surfaces in the [DiGiCo] range, I have used an SD5, 10, and 7 on this campaign pretty seamlessly, when schedule or territory dictated. The SD5 is my console of choice, provided the I/O fits into its specification; it is such an enjoyable console to mix on. Visually, there is so much information available to you on an immediate level.

“The three screens are just tremendous; I normally leave my Waves plugins on the central display, and input control on the two side screens, which allows me to use the overview screen for buss and matrix metering, and my Snapshot sheet. Mixing on digital consoles is an empowering experience, and you can do so much on the SD5.”

Because Dua Lipa is now transitioning into production level touring, Nicholson says there are even more reasons to stick with DiGiCo on the road:

“When the PA and the environment shift everyday, the precision of the D-A conversion is what allows me to make quality judgements regarding the mix, and the DiGiCo preamps are great, too. As PAs themselves improve, you can hear greater detail, and there are less places to hide, particularly when mixing at 96kHz – the DiGiCo gives me the right tools to deliver my mix at the right quality.”

Dua Lipa’s first record is so dynamic and there are a broad palette of sounds across it, therefore using Snapshots is a must for Nicholson.

“She wants her show to be just as exciting and dynamic, and it’s very important to her that the audience join in dancing and singing. In this context, myself and Alex [Cerutti, monitor engineer] feel that we need to balance consistency with individual song characteristics, and using Snapshots allows us to control both, yet still mix each song appropriately for the environment,” he says. “I can’t imagine any mix, even with Snapshots, losing the hands-on component. I’ve never seen an engineer just press ‘next’, and step back from the console – automation is a tool to allow you to listen, and objectively judge, not a set of constraints that you have to work within.”

Alex Cerutti has been mixing monitors for Dua Lipa for the last 16 months and has developed a strong working relationship with the artist.

“Trust is very important, and she has high standards, and is very driven; and because of this, pointing her in the right direction as far as what she wants to hear, and what gets the best out of her, has been easy,” Cerutti says.

For this tour, Cerutti needed a console that was compact enough to fit into the smaller venues, but still had the features he loved on the SD5 and SD7. Enter the new SD12.

“Having two screens, plus running Waves [plugins] on a separate computer means I can see everything all the time,” he says. “I like that I can have any channel anywhere on the board in any order; keeping important channels where I want them all the time, whilst keeping my input patch one-to-one with the channel list.”

Like Nicholson, Cerutti also utilises Snapshots on his console.

“The functionality of the Snapshot system is really granular, which allows me to have certain things recalling on some Snapshots and not others; this can also change per Snapshot, which makes it easy to have guest channels change per guest without using a lot of DSP.”

Cerutti is running at 96kHz, and is utilising 66 channels including FX returns and talk mics. With regard to mixing, it is a case of automating as much as possible, but never losing sight of what he is trying to achieve sonically.

“Currently, I only have one Snapshot per song, so even though every song is automated I mix Dua’s mix like a FOH mix, pushing different channels for pitching or timing needs, or to make it sound as close as possible to a live version of the album.”

In addition to her BRITs performance, Dua Lipa will perform across the UK in April 2018, descending on a host of arenas including Glasgow’s SSE Hydro, Manchester’s O2 Apollo, Birmingham’s Genting Arena, and London’s Alexandra Palace.

Having two screens, plus running Waves [plugins] on a separate computer means I can see everything all the time. I like that I can have any channel anywhere on the board in any order; keeping important channels where I want them all the time, whilst keeping my input patch one-to-one with the channel list. 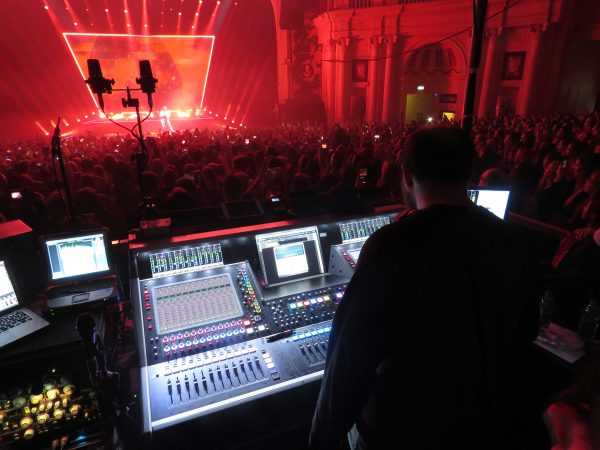 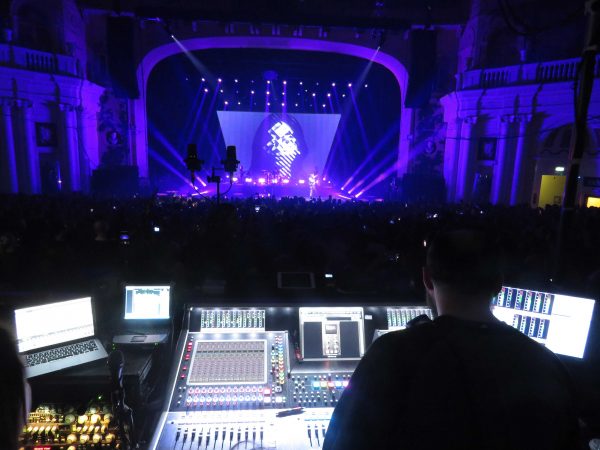 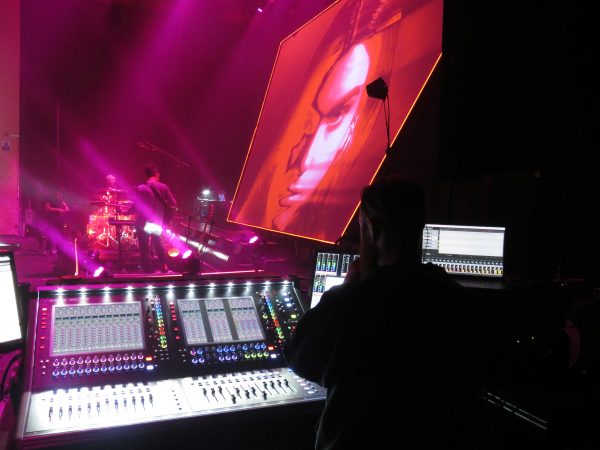