Home / Case Studies / DiGiCo Proves Its Worth For Liam Gallagher

DiGiCo Proves Its Worth For Liam Gallagher

In October 2017, former Oasis frontman, Liam Gallagher, released his debut solo album, As You Were. The record debuted at number one in the UK, and went gold in its first week, outselling the rest of the top 10 of the UK Albums Chart combined.

In October 2017, former Oasis frontman, Liam Gallagher, released his debut solo album, As You Were. The record debuted at number one in the UK, and went gold in its first week, outselling the rest of the top 10 of the UK Albums Chart combined. It has since been certified platinum. Though the record is outstanding, and has received much critical acclaim, Gallagher is in his element in the live arena; the guys responsible for helping make that happen are FOH engineer, Shan Hira, and monitor man, Jon Simcox, both of whom are dependent on their DiGiCo mixing consoles.

It was when playing in bands as a young man that FOH engineer, Shan Hira, developed an interest in the technical side of the music industry, which began in the recording studio.

“I was fascinated by recording, and took an interest in what was going on; that’s where my love of mixing desks and outboard was born,” Hira explains. “I then got a job as an engineer at a recording studio, and began recording local bands, which then progressed into doing live sound for them, and consequently for other bands.”

Hira has only ever wanted to do FOH sound since then, and he’s clearly got a knack for it: his client roster includes an eclectic mix of major acts such as The Chemical Brothers, The Streets, and Lily Allen.

Both Hira and Jon Simcox are big DiGiCo users. Over the course of working with Gallagher, Hira has used pretty much every console DiGiCo has ever put out – from the compact SD11 to the flagship SD7, and everything in between. On this arena tour, he was using an SD5, supplied by Skan PA, running at 96kHz.

“I have been using DiGiCo desks for a few years now, so I know my way around them pretty well,” Hira reveals. “It’s a very flexible surface, and enables me to put all my ins and outs exactly where I want them; and I find it a quick surface to get around.”

Hira is running snapshots – just for his mutes and faders – and uses the internal FX within the console, with a few old favourites by his side.

“There are some very decent effects in there, but I do also like to bring some familiar outboard with me: I am using an Avalon 737sp, and two engines of a Lexicon 480L on Liam’s vocal, plus an SPX 2000 on the snare.”

Jon Simcox started working (for free) for a local PA company when he was 15 years old, ‘as a general dogsbody, out of the Robin Hood R&B club in the Black Country’.

“I was a third man, stage patcher, you can imagine… And one day, the monitor engineer didn’t turn up, so it was up to me to have a go,” Simcox smiles. “I’ve always done monitors. Although most bands I’ve worked for over the years I have at some point ended up having to mix FOH for, once or twice, I’ve always seen myself as a monitor engineer first and foremost. I think they’re two very different skills.”

At monitor position, Simcox is running an SD10, again at 96kHz:

“To be honest, I had the desk recommended to me by a friend, who’s used one for a while (Dan Speed, who does monitors for Biffy Clyro, also a Skan client), and I’d heard great things about the functionality, and the macros; and for IEMs, how good the stereo imaging was, and how transparent the pre-amps were. I was sold after our first day in rehearsals.”

Like Hira, Simcox uses the internal FX from within his DiGiCo:

“I’m using around 10 internal FX, and with a bit of tweaking, EQing, and side chain compression, they sound great. No outboard needed at all for me. It’s not a particularly complicated gig, either, so I use macros for specific fader/send/mute changes in seven or eight songs.”

It’s a proper rock and roll setup, too, of course. On stage, Gallagher opts for wedges over ears, all with just vocal, slap delay, and a bit of reverb pumping through them. Loud stage, then?

“It’s ear-splittingup there,” confirms Simcox, with a laugh. “But the fact we carry our desk, band in-ears, and mics everywhere means their mixes are very consistent from show to show, so that helps. We spent a lot of time rehearsing before the campaign started, too – around 12 weeks – so they got pretty true representations of the the songs. And live, the sound definitely comes across a lot rawer and punkier than the record. That’s probably down to Liam’s maniacal aura on stage, though! [smiles]”

“The DiGiCo consoles were a solid choice for Liam Gallagher, as they are on so many of our tours. Despite owning 19 SD-series consoles, we rarely see them, such is their popularity.

“The only downside of using a DiGiCo at FOH on this tour is their seemingly magic ability to attract beer being thrown by the enthusiastic crowds!

“It’s been a real privilege for Skan to work with such an iconic performer, and to support his fantastic engineers, Shan & Jon.”

Liam and co. are currently out in South America, playing shows in Brazil, Argentina, Chile, and Peru, and will be returning to the UK for a string of festivals in the summer.

The DiGiCo consoles were a solid choice for Liam Gallagher, as they are on so many of our tours. Despite owning 19 SD-series consoles, we rarely see them, such is their popularity. 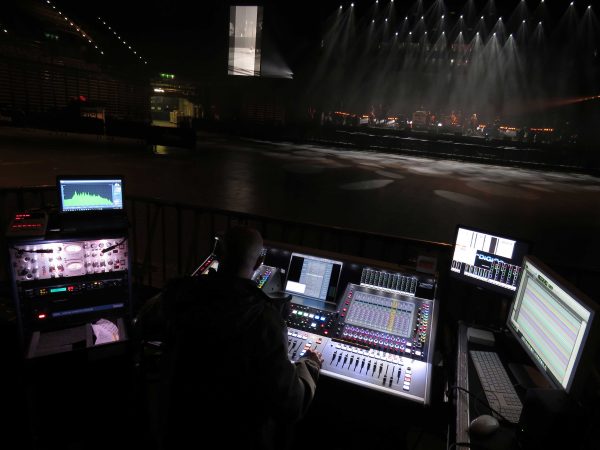 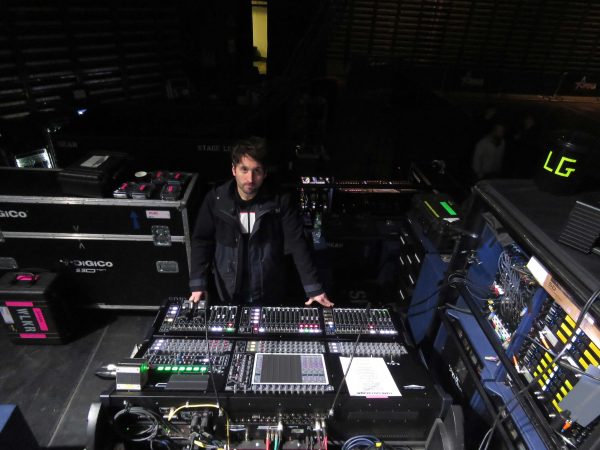