DiGiCo SD10 Is Not Giving In On Tom Walker Tour

Tom Walker’s FOH and monitor engineers explain why DiGiCo is a game-changer on the 2019 BRIT Award-winning singer’s European tour...

FOH engineer, Mike Platt, has worked with Tom Walker since 2017, when he was part of a three-piece support act for The Script. The Scottish artist’s rise to fame has been quick: since then he has secured a 2019 BRIT Award, and his debut album, What A Time To Be Alive, peaked at the top spot in the UK Album Chart. This meant Platt and monitor engineer, Liam Shannon, opted for a pair of DiGiCo SD10s to produce a bigger and bolder show for Walker’s UK and European tour.

“I have been using DiGiCo for around 10 years now. It’s always been my desk of choice,” says Platt, who has experience working on several of the SD range consoles. “My FOH setup comprises an SD10-24 and an outboard rack with some toys in. I chose the smaller SD10-24 for numerous reasons, but mainly for its size and power. I can easily get it to FOH and get it tipped without it being too much of an event. I also like to mix on one layer, so 24 fader channels makes me prioritise the channels that are most important for the show, and they live on the top.”

Platt does the majority of his processing from within the console, and effects-wise everything is being done on the DiGiCo.

“I know the exact effects sounds I want in my head, and I can get those results with the DiGiCo onboard stuff,” he reveals, adding that Walker’s vocal chain has to be pretty long to get the desired control, whilst still allowing the artist’s voice to sound natural. “From source, Tom has probably the largest dynamic range going: he goes from whispers, to blisteringly loud parts. To control this, I go through Channel EQ > Distressor > Channel Compression > Group Dynamic EQ > Group De-esser. Apart from the Distressor, the chain is all inside the box, and its intuitive control makes it easy.”

Rock solid stability is a big thing for Platt, who admits that he tries not to get sucked into the hype of fancy new gizmos and things that may be unreliable or untested, preferring to keep everything as rock solid and stable as possible.

“My job is to make my artist sound great, and for the audience and management not to even think about the tech side of things; there is no scope for failure,” he declares. “I need to have 100% confidence that the gear will work every day, and the way DiGiCo boards are set out is similar to the way my head works! The workflow is so intuitive, and once you know the little tips and tricks to speed yourself up, you can fly through the setup.”

Platt reveals that the ability to arrange fader banks within the console is quick and makes life that bit easier.

“Also, the Matrix panel on the DiGiCo is really powerful; you can send anything anywhere, which is extremely useful. And the Macros are a very powerful tool – and so customisable. I use hot keys to turn gates on and off on certain channels in certain parts of songs, and save and update scenes. It makes the show operation so easy to repeat without having to change layer or mess about too much.”

Ease of connectivity is another key feature: “I know it sounds simple, but being able to rock up to a festival and give broadcast one line of MADI at 48kHz for their feed is amazing! Festival load-ins are fairly stressful as it is, so that’s something that’s very important that you don’t have to worry about. And also for the MADI record at FOH, you can just come out of the local MADI ports – no worries!”

However, Platt’s most important features are the audio I/O and copy audio sections.

“As I’m a geek for connectivity, being able to navigate around these menus quickly is a big plus. Being able to listen to the inputs directly from the rack before channel processing is such a nice tool, and all the control of splits and sharing is great. DiGiCo’s reliability, versatility, and build quality are the main points for me. In the world of digital audio systems, we shouldn’t be limited in any way, so DiGiCo has put it back on the user and the limits of their creativity, rather than the constraints of the hardware/software.”

Liam Shannon has been Walker’s monitor engineer since May 2018, and says that for the most part, the band is fairly low maintenance with a standard band mix with their own instruments peeking out on top.

“I have eight stereo in-ear mixes – Tom’s, five for the band, one guitar tech, and one spare; and three mono mixes – Tom’s wedges, Tom’s vibe board, and a drum sub,” he explains.

Shannon has been operating on DiGiCo for four years now, going from an SD9, to an SD10-24, and most recently to a full-size SD10.

“The SD10 has been complemented by an SD-Rack running at 96kHz with full 32-bit I/O card upgrades. DiGiCo just compliments my ideal workflow perfectly. The channel strip UI makes perfect sense for how I want to operate, and having independent rotaries for things like every section of the EQ is absolutely necessary for me,” he enthuses.

Describing the upgrade to 32-bit I/O as a ‘no brainer’, Shannon says the lower noise floor cleans everything up so much when running around 56 channels.

“I could hear the difference immediately in the songs where instrumentation gets incredibly busy and louder; there was more space in the mix – the same mix I’d been using built from the standard I/O cards,” he recalls. “There’s one song called Not Giving In that has a big drum and bass-style ending that always ended up taking up all the dynamics in the mix. The vocal couldn’t sit above the music without sounding really compressed. I’ve not had that problem since upgrading the cards.”

During a tour, Shannon sets up at least one Snapshot for each song.

“The scope functionality for Snapshots on the DiGiCo is so conclusive that I can confidently save channels that I’ll always be changing processing on during a gig, such as the drum kit, whilst recalling different guitar EQs to suit different songs, or dynamics on an acoustic which is fingerpicked in one song, then heavily strummed in another,” he elaborates. “A problem that arose from this, and from us not having a monitor tech on tour, is that I needed to manually trigger each Snapshot, which became tricky if there was a technical issue on stage that I needed to fix, but a song was about to end.”

This led the team into using another ‘awesome’ feature that DiGiCo offers, which is MIDI recalls Snapshots.

“If for any reason I needed to leave the desk, I’d enable MIDI recalls Snapshots and not have to worry about returning to the desk to trigger the next song’s parameters,” Shannon explains. “The band all play to click, and our playback rig shoots out a MIDI note into the DiGiCo, those MIDI notes are then assigned a Snapshot/Scene, so whatever track our playback is playing it pulls up the correct Snapshot for that song.”

Much like Platt, Shannon says he could not live without Macros.

“When your show files start to get as complicated as mine ends up being, you simply can’t operate without having Macros set up as a get out of jail free card. As it’s an emergency feature, my MIDI needs to be on or off within a split second, and Macros make that possible.”

“Having KLANG 3D fully integrated into the console is a game-changer, and something I would love to try out. The only thing stopping me is consistency,” he says. “Right now we can fly into any country with a hired DiGiCo, and all I need is the show file on a USB in my pocket. But KLANG is definitely on my list!”

For Shannon, the thing DiGiCo is doing better than any other manufacturer is implementing features on its consoles that have clearly come from real world experiences.

“The new SD7 Quantum features, like nodal processing, are so exciting for me. It’s exactly the type of processing I’ve been looking for to help me cater to band member’s different tastes, whilst at the same time avoiding 20+ channels of duplicated inputs and complicating my show-file even more than it already is,” he concludes. “Also, it gives the operator the ability to completely customise the surface, which means focus can be solely on the mixing.”

Hi res images and word doc are available for download from https://url6.mailanyone.net/v1/?m=1ieaRF-0009bI-3T&i=57e1b682&c=9MAGn-FTHseMGe8UBbTkoZLE2iRJ1sd_i0tJNVsb5kKMRGmUgt_liUvXanOrYA_HZUvsnrij7CBM1X5BObh4eJ3c5OTaKDzwMCDl9bDWcOKdpgwit2MApW-_qZjO5oXL2YBESwXKVPh72r_v9t6E8pGa8pxxXjYOe7q0OXWlnzNjDofw6KQRtcZlK9cAVF0bdUsfdtYJIT3aNeTT8SSqSvRnEDJ3gGfPAPQLqfRaIBXQd2GRk1xxEhvDwEK99vXP-aSaPjiTXfLHEK9ZKOkGmg

“The SD10 has been complemented by an SD-Rack running at 96kHz with full 32-bit I/O card upgrades. DiGiCo just compliments my ideal workflow perfectly. The channel strip UI makes perfect sense for how I want to operate, and having independent rotaries for things like every section of the EQ is absolutely necessary for me" 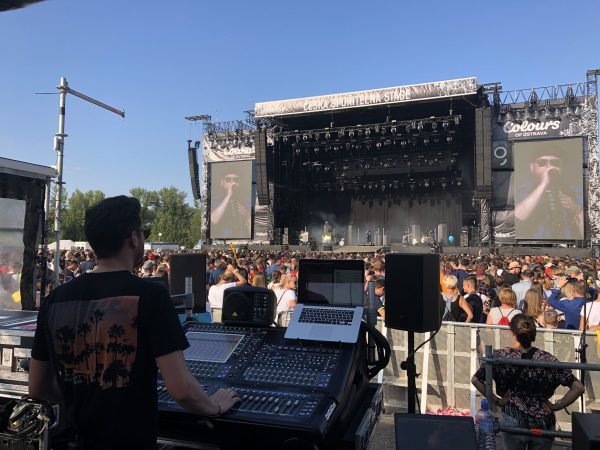 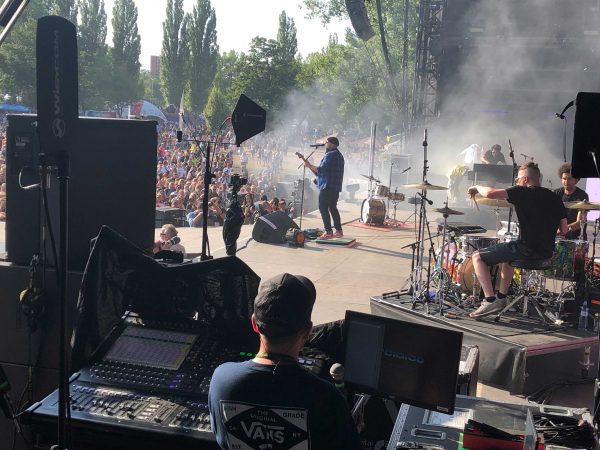 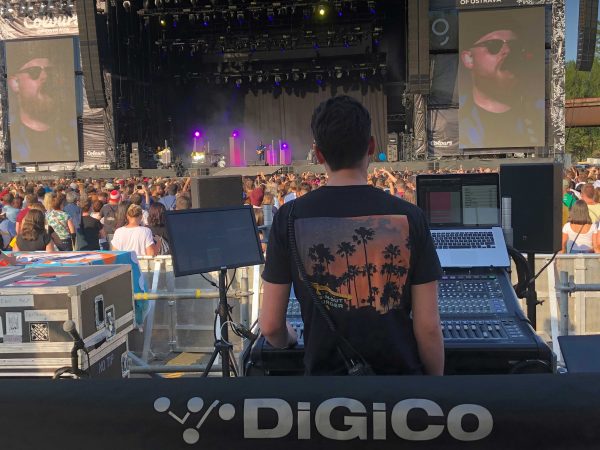