SE Systems deploys a variety of 17 SD-Range and S-Series consoles across 13 stages, and relies on a new 4REA4 to keep the music non-stop on the Watson and Cabin Stages

WILKESBORO, North Carolina – With most music festivals these days being multi-stage productions, sound reinforcement providers have become remarkably adept in speedily switching over backline setups and minimizing downtime between artists’ sets. But Wilkesboro, North Carolina’s annual Merlefest, reinforced by Greensboro-based SE Systems, Inc., was able to take that transition speed to a whole new level this year thanks, in part, to DiGiCo mixing consoles and the manufacturer’s new 4REA4 networked audio solution.

Established in 1988 in memory of Eddie Merle Watson, the son of bluegrass icon Doc Watson, as a fundraiser for Wilkes Community College, the festival has pushed the boundaries of what Watson called “traditional-plus” music to feature acts as diverse as Elvis Costello, the Doobie Brothers, and Zac Brown Band. SE Systems has been the sound provider from the beginning, and the systems have grown along with the festival, which annually draws more than 75,000 people to the school’s campus. This year, MerleFest utilized 17 DiGiCo consoles—ranging from the compact S21 to the large-format SD5—spread out across 13 stages for FOH and/or monitoring.

“On the main stage there were three, maybe four, bands that were just straight-up type bluegrass the whole four days,” says Chris West, who handles production, system design, and installations for SE Systems. “Some people still see MerleFest primarily as a bluegrass festival, but two-thirds of the bands on the main stage had a drum kit, just to give some perspective.

“The main Watson Stage had an SD5 at front of house, and then an SD11 for the Cabin Stage,” says West, explaining that the Cabin Stage is a side stage, attached to the Watson, that gets active whenever the main stage goes quiet for a changeover. “We never go down on sound at all. Bands don’t get a chance to do soundchecks or anything like that once we get rolling. It’s a near seamless stream of music from the day’s first song to the evening’s final note.”

“I love having the SD5 out there because the layout is so favorable to helping guest engineers feel comfortable. It’s very easy to make custom fader banks for every band. Using a festival plot, we do that to basically give engineers what they’re used to seeing in their channel lists. I typically do a fader bank of drums, and then I’ll have a backline fader bank. I try to put everything in the order that the engineers are used to seeing it—whatever their riders specify—even though it’s a festival patch. And then I’ll usually have another bank; my right bank will often be the vocals and effects and stuff like that, and I’ll leave the center for VCAs. And the engineers all seem to really like that.”

As for the DiGiCo 4REA4, West used it as a large matrix mixer, instead of bringing in a separate console that all of the other consoles feed, and that, in turn, fed the PA.

“Our 4REA4 was loaded with an analog input card, an analog output card, and an AES output card,” he details. “We also had an A168 STAGE box and an eight-channel ACONTROL8 fader wing that lived at front of house with the SD5, SD11, and other consoles on those occasions when a guest engineer insisted on bringing in their own. I used the 4REA4’s analog inputs for the two SD desks and then used the AES out to hit system drive for the PA. Then I also had the analog outputs that I was able to use to send to other audio destinations,” he notes, pointing out that there were audio needs outside of the PA, including feeds that went to video and an archival recording of the entire event.

“It’s the rule, not the exception anymore, that any festival will have audio going all over the place and you don’t want to put it on the console, because someone might come drop a file in the desk.” If that were to happen, all of the “non-stage” audio needs would get cut off. It’s why festivals generally still use a separate mixer to drive the PA and matrices. In the past, SE Systems has carried additional consoles and other systems just for this purpose, but West says that the 4REA4 is the easiest and most elegant solution he’s seen in 17 years of working MerleFest.

West positioned the A168 STAGE box in the area where the guest consoles were set up, with connections simply made via CAT6 cables. “At some points we’d have one or two guest consoles out and you could leave them hooked up all the time, which made it great getting it right back into the matrix mixer,” he says. “We didn’t have to run lines all the way across front of house; I could put it where the desks were and then use the ACONTROL8 at the main mix position for my faders. What was really nice about that was that I was able to see the signal on the LCD screens before I opened it up in the PA. With a lot of matrix mixers, you can’t see what’s happening until you unmute that channel. So without opening it up in the PA, there’s no real way to tell what kind of level there is, and you can’t verify lines with those. The 4REA4 allowed me to verify feeds before I opened each channel. I could also solo and listen to it, and then I had faders and mutes to turn them on and off.”

Already a DiGiCo fan, West is a 4REA4 convert, too: “Man, for a festival situation, this is just way superior to any other solution we’ve ever used. I fully expect to see it back here next year.”

Additional information on this year’s MerleFest can be found at www.merlefest.org. SE Systems can also be found on the Web at www.sesystems.com.

Man, for a festival situation, 4REA4 is just way superior to any other solution we’ve ever used. I fully expect to see it back here next year. 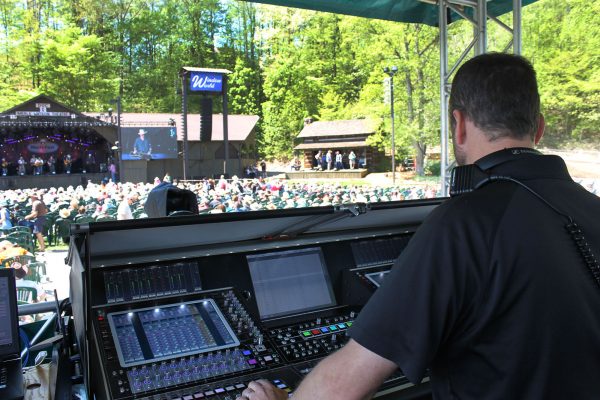 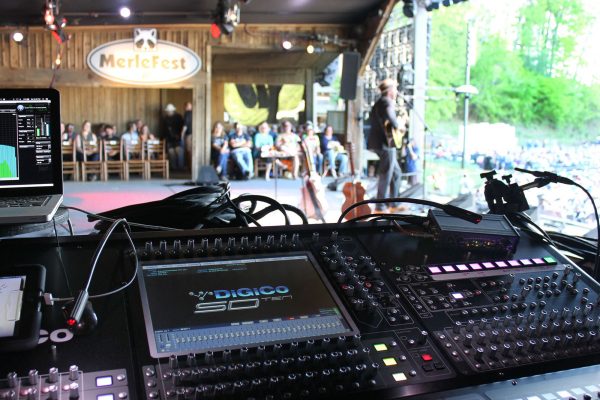 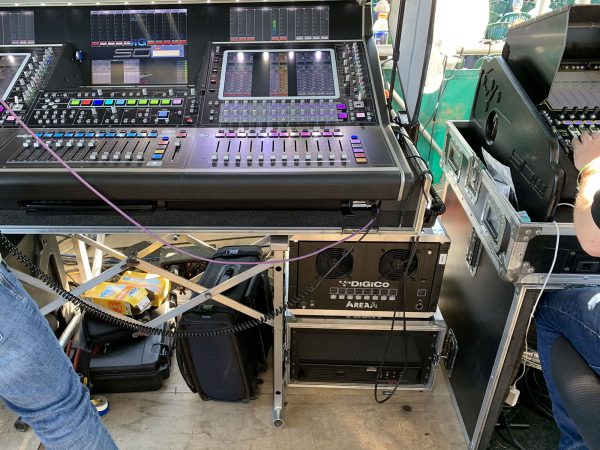