Spectrum Sound supplied a Quantum7 pair for the band’s tour legs, as well as a compact Quantum338 pair as a secondary control package for the group’s many one-off dates

COLORADO SPRINGS, Colorado – September 2022 – Following a lengthy five-year touring hiatus, North American fans of OneRepublic were justifiably thrilled to catch the Colorado Springs-founded band on its recent Never Ending Summer Tour, which stopped at more than 40 arenas, theaters, amphitheaters and pavilions between early July and mid-September. Equally elated were FOH engineer Justin Ripley and monitor engineer Dave McMullin to be manning their mixes on a pair of DiGiCo Quantum7 consoles supplied by Nashville’s Spectrum Sound, which supplied the control and PA packages for the tour.

For over a year, Spectrum has also been equipping the production team with a pair of DiGiCo Quantum338 consoles for the band’s many non-tour-related shows. “We’ve been out for most of this year, including seven weeks in Europe during April and May, but we’ve always had a good number of one-offs in between,” says McMullin, who has been with OneRepublic for the past six years. “We have a lot of creative itinerary routing, with many side shows scheduled in the midst of ‘normal’ touring, so Spectrum has provided us with multiple control packages that allow us to send different rigs as needed. In my time with the band, we’ve only really had two proper touring seasons, with the rest of the time being filled with many small runs and one-offs, often still doing 60 to 70 shows per year. Having two rigs ready to go at all times allows us to be flexible and make the potentially challenging scheduling work.”

FOH engineer Justin Ripley’s working history with the band goes back to 2019. “Although I first saw a DiGiCo console in 2011, I didn’t actually carry one out on the road until I fully made the switch over to DiGiCo and Waves in 2016, which I’m so glad I did because I need all the modern bells and whistles to get the OneRepublic mix to really pop,” he says. “I really prefer, at least currently, to start with more of a neutral sound, which DiGiCo is known for, and then beat the hell out of the signal from there.”

“OneRepublic’s records typically have a big, beautiful bed of band, and then Ryan [Tedder] and his vocal production is featured on top,” he continues. “Depending on the environment we’re in, my ultimate goal is full intelligibility for Ryan’s vocal to the audience, but not at the expense of the band. I incorporate lots of modern tricks to make sure it’s not a ‘star-vocal-only’ show. The band is super important live in my view.”

Ripley walks through his process to accomplish that on his Quantum7 at front of house: “I’m going from channels into groups, then into more groups, and then matrixes, which nowadays is pretty normal at this level of touring, but I still think it’s the secret to getting a good mix live. I like to say that all of the audio has to touch each other. The instruments can’t all meet up on the master fader competing for attention equally. Like-minded things—such as Moog, bass guitars, VSTs, and sub drops—have to live together, like in a Bass Buss.

“I have fun assigning different things to different groups, too. For example, we have sound effects in some tracks and I put those in the Cymbal Buss because it’s kind of what they do. They’re impact moments, like risers and explosions and fade outs, that are similar to hitting a crash on the kick. And instead of doing a bunch of analytical EQ on that buss, I put all that through a tape machine, which saturates out and blurs and squares some of the harsher high-frequency stuff. When a sound effect is competing with Eddie’s [Fisher] crash, the processing does the math for me. It all becomes one sound blended and that process is repeated over and over in the console in dozens of applications.”

Regarding processing, Ripley keeps his setup simple. “I’ve landed on DiGiCo and Waves exclusively,” he says. “If I had a rock-and-roll three-piece, all analog with boutiquey outboard, it would be a dream, but that’s not this gig. Over the years, I’ve moved more and more over to processing in DiGiCo, then adding modern sheen and mid/side and sidechain management and psychoacoustic type stuff and timed delays in Waves. For Ryan’s voice in particular, I aim for the ‘record vocal,’ so his signal has the typical army of de-essers and compressors, EQ, and et cetera. But in environments with terrible acoustics, I open him up and clamp down on the band more so the vocal can breathe dynamically and everyone can hear what he’s doing, down to the vocal runs and breath work.”

Over in “monitor world,” Dave McMullin has been appreciative of the Quantum7’s generous I/O capabilities on his end of the fiber. “We’ve been carrying Quantum338s in our packages for the last year and a half, and I’ve loved the Quantum platform, but we’ve also been maxing those desks out in terms of input counts,” he describes. “When going on tours, the band typically adds some additional instrumentation, and we may have the occasional string quartet or a few guests. The Quantum7 gives us the necessary expandability for those additional inputs when they arise.

“Having been on the Quantum338 and utilizing Mustard and Spice Rack on a number of channels, being able to keep our processing consistent between platforms is key,” he adds. “The Mustard Compressor options have probably been the thing I’ve used the most. The array of compressor types, as well as ability to compress in parallel, allows me the flexibility to match inputs with the necessary dynamic control specific to each instrument and player. And the Naga 6 is my second most relied upon part of the Quantum processing. A good number of the band’s playback sources are pulled from the records and, as such, they come to us much more open and lightly processed than where they end up on a finished album. Naga 6 helps to shape and control these in ways that fit more into the dynamics of the live show versus a studio album. “

Whether he’s in front of the Quantum7 or the Quantum338, McMullin points out that DiGiCo’s signature flexibility is the single biggest plus that the platform affords, in his opinion. “Our audio control is heavily integrated into backline and playback, especially with MADI and MIDI,” he notes. “One of the most powerful features—not unique to Quantum, but to DiGiCo in general—is the Macro. Via MIDI, our playback engineer is able to trigger Macros without my involvement during a show. He’s able to talk to specific band members directly, as well as control some mutes and other functions.

“Beyond that, some of the other functionality that is helpful on my side of things is the ability to choose a sidechain input for gates and compressors. Our cello has both a pickup and a mic installed. The combination of the two sounds fantastic and gives the player an open, natural sound, but the mic is susceptible to bleed, especially while the drums are being played. Through some creative sidechains within the console, I’m able to control and limit the bleed so the cello sounds as clean as possible. It’s little things like this that add up and make DiGiCo consoles such a pleasure to use.”

With the North American tour freshly wrapped up, the group will soon be heading back to Europe as well as Israel, Saudi Arabia, Dubai, and South Africa in the fall. Touring will later pick back up in the spring of 2023, hitting Asia, Australia, and New Zealand. 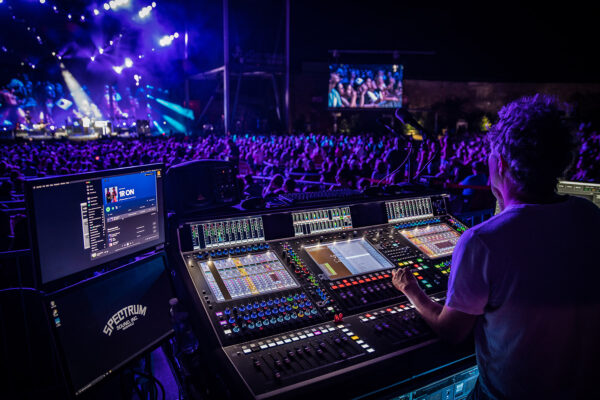 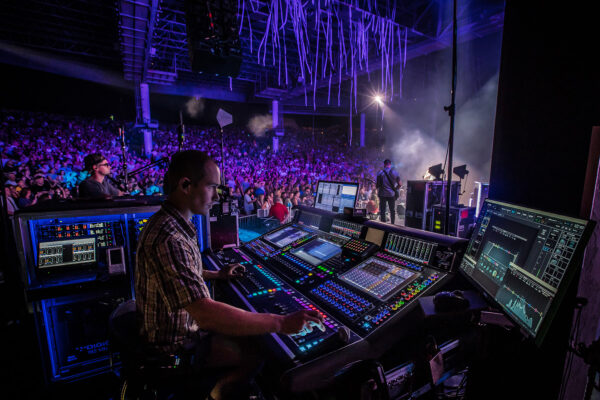 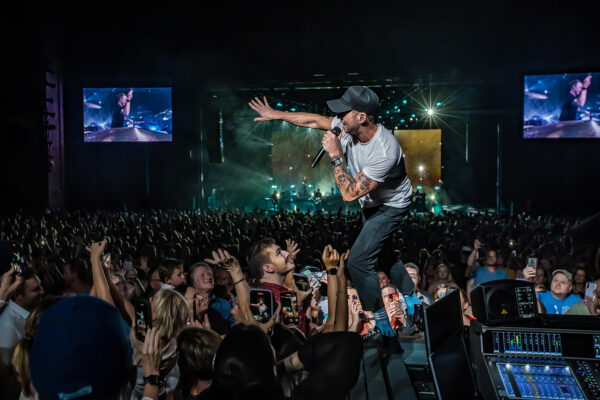 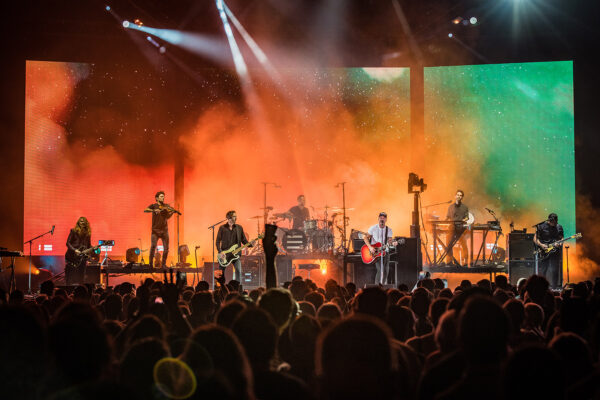 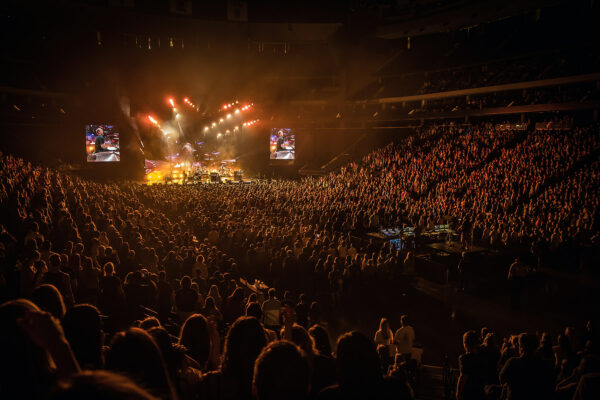