NEW YORK CITY – November 2022 – Times Square Church (TSC) on West 51st Street in Manhattan’s Theatre District has a long and diverse history. Initially built by Warner Brothers in 1930 as a movie palace known as the Warner Hollywood Theatre, the venue later transitioned into the Mark Hellinger Theatre, which hosted iconic Broadway musicals like My Fair Lady and Jesus Christ Superstar.

In 1991, the space was once again repurposed, this time as an interdenominational house of worship under the direction of Pastor David Wilkerson, author of The Cross and the Switchblade. He wisely chose to preserve the venue’s modern façade and rococo interior, now New York City landmarks. With a room this stunning, it was only fitting that it should also sound equally beautiful. Today, it does, thanks to a new L-Acoustics K3i loudspeaker system driven via a DiGiCo Quantum338 mixing console, both of which were installed by Special Event Services (SES) Integration.

Over the course of the global pandemic, according to local ordinances, Times Square Church had closed its doors as a public worship space for 18 months, allowing church leaders to undergo a proper reassessment of their AVL facilities. For many years, TSC had employed a very touring rider-friendly audio setup—an L-Acoustics V-DOSC and dV-DOSC rig paired with DiGiCo SD10 mixing consoles for both front-of-house and monitors—but the gear was starting to show its age. Furthermore, the system’s subs were in a cavity under the stage that flooded six years ago, rendering them unusable, which meant that the tech team was leaning on the mains also to deliver low-end reinforcement for TSC’s sizable worship team.

“On a typical Sunday, we have a drum set, bass, multiple guitars, organ, keyboards, a full choir of 60 to 100 people, as well as up to ten singers on stage, so we have a ton going on through the PA,” says TSC Production Director Luke LaPrairie. “When considering a new loudspeaker design, we were looking to provide better coverage throughout the room, so everyone attending would have an equal experience. We also needed to improve frequency response accuracy. We wanted to ensure that what happened onstage would come across to the audience with as much fidelity and passion as what was being performed.”

But there were a few obstacles to overcome first, points out SES Integration Director Trey Blair. “One challenge we had was the space itself,” says Blair, who previously served as a FOH engineer for Elevation Church before joining SES six years ago. “It’s a gorgeous room, so we couldn’t change anything about it. We couldn’t create more room where there wasn’t any like we can in new construction. We had to fit the new PA where the old one was; plus, we had to unobtrusively add subs to the room to support the church’s highly dynamic worship style.”

Just as importantly, Blair adds, the new system must ensure that the spoken word of Tim Dilena, TSC’s senior pastor for the past two years, could be clearly heard in every seat in the house, including those at the very back of the venue and under the balcony. “We utilized Soundvision to create a model of the space, then acoustically modeled several L-Acoustics solutions in the room, and K3i won hands-down every time. We needed the impact of a big box but couldn’t have the size of a traditional large-format PA, so K3i fit the bill perfectly and left room for us to fly the subs beside it. Plus, its adjustable Panflex technology played a big part in the design of the arrays’ upper enclosures, allowing us to very effectively reach the top of the balcony without energizing the hard surfaces on the walls.”

Primarily utilizing the former sound system’s rigging points, SES Integration was able to fly a dozen L-Acoustics K3i enclosures alongside six KS21i subs to the left and right sides of the stage. A single coaxial X8 mounted to the wall below each sub hang provides far left and right fill, while five ultra-compact 5XT aesthetically mounted into the face of the stage deliver front-fill coverage. Several X12 located upstage left and right provide choir-fill, while an additional pair downstage serve as wedges for the pastoral team and worship leaders.

To suitably complement the room’s revamped loudspeaker design, SES installed a DiGiCo Quantum338 to serve as the church’s FOH console. This shares a newly-integrated fiber-optic loop with TSC’s twin existing SD-Racks and SD10 consoles: one continuing to facilitate monitor mixes, with the other being repurposed as a dedicated broadcast console for the church’s recently-constructed broadcast mix room. Each of the SD10s was upgraded with the latest SD10+ software for additional features and input channels, and SES also supplied a DiGiCo Orange Box loaded with DMI-Optocore and DMI-MADI cards to facilitate connection to the church’s video router for embedded audio.

“The Quantum338 was our first choice for this project,” Blair shares. “It fits into the church’s existing hardware ecosystem and gives them the right channel count, bus count, control surface functionality, and I/O connectivity to serve them today and well into the future. The musicians at Times Square Church are top-notch, given the amazing talent pool that New York City has to offer, and this desk gives the church’s audio team such a great palette of tools to shape a beautiful mix.”

TSC FOH engineer Francisco Mota couldn’t agree more. “I’m really enjoying the Quantum338’s Dynamics and Mustard processing,” he says. “I use a combination of the board’s processors and Waves, but I can’t deny that I prefer to make my vocal mix solid on the DiGiCo processing as much as possible. I also particularly love the ability to move and assign faders on the fly, and both the Snapshot and Solo-in-Place features have been very helpful.”

For LaPrairie, the choice of adding another DiGiCo console was an easy one, given the church’s double—and continuing—successes with the SD-Range desks. “We’re going on eight years with our SD10s, and the fact that we’ve had no major failures with them impresses me a lot,” he notes. “That reliability combined with their Waves integration and the amount of flexibility they offer helped drive our decision to upgrade our FOH position with a Quantum338.”

With the new L-Acoustics and DiGiCo gear in place, the church now has a system that can more than adequately keep up with its dynamic and high-energy worship team. “This system is keeping the thousands of worshipers that come to TSC on their feet,” Mota enthuses. “I love the Quantum338 combined with the K3i—the warmth and clarity are all there. The impact it’s had on the audience is incredible, and the responses I’ve heard are overwhelming.”

“Hearing this system in this room for the first time was breathtaking—the amount of energy was palpable, and it continues to impress,” LaPrairie agrees. “Working with SES on this project was such a great experience because we were able to share our ideas and lean on their expertise, and that partnership brought us to what was certainly the best solution gear-wise. We’re all extremely happy with the results and excited about the potential of what this system will continue to bring to our worship experiences.”

Related images:
1) LA_DGC_TSC_1.jpg – NYC’s Times Square Church is home to a new L-Acoustics K3i loudspeaker system supplied and installed by SES Integration
2) LA_DGC_TSC_2.jpg – The Manhattan church has a formidable worship team, band, and choir that bring plenty of energy to the room via the new sound system
3) LA_DGC_TSC_3.jpg – TSC FOH engineer Francisco Mota manning the house mix on the church’s new DiGiCo Quantum338 mixing console
4) LA_DGC_TSC_4.jpg – Another view of Francisco Mota on the Quantum338 desk
5) LA_DGC_TSC_5.jpg – The new system is “keeping the thousands of worshipers that come to TSC on their feet,” says the church’s audio team
6) LA_DGC_TSC_6.jpg – Adjacent arrays of a dozen L-Acoustics K3i enclosures and six KS21i subs are flown on each side of the stage

The Quantum338 was our first choice for this project 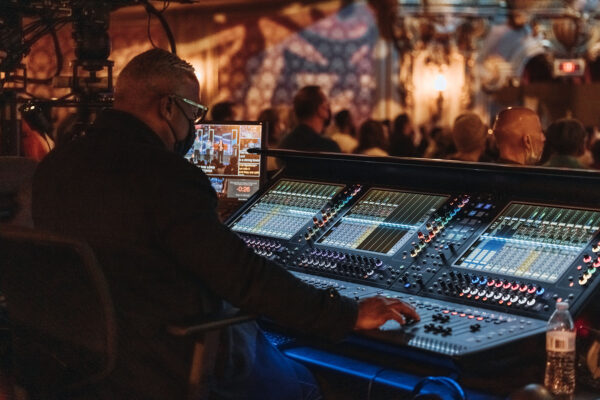 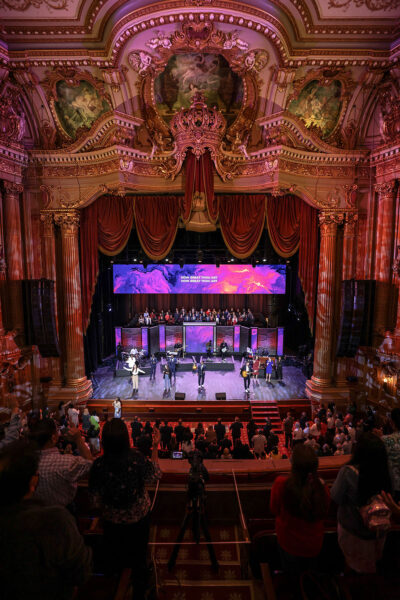 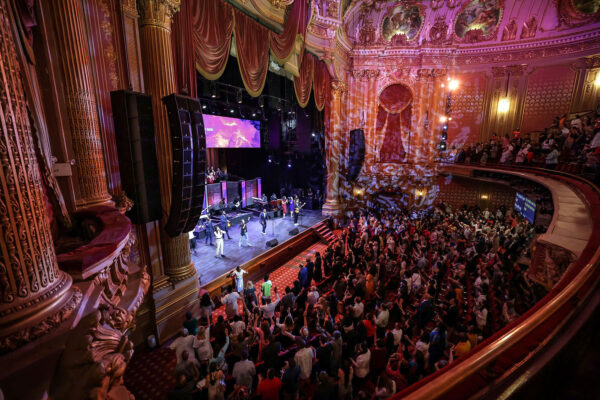 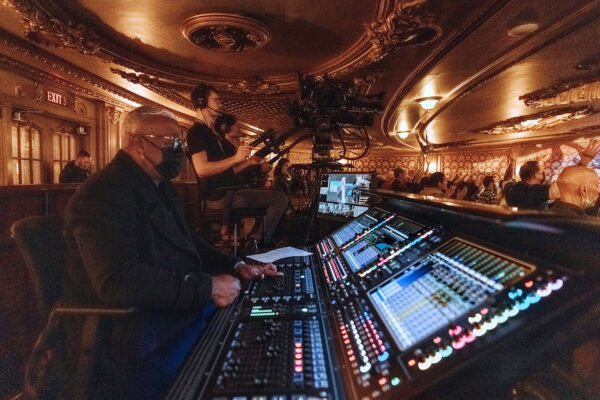 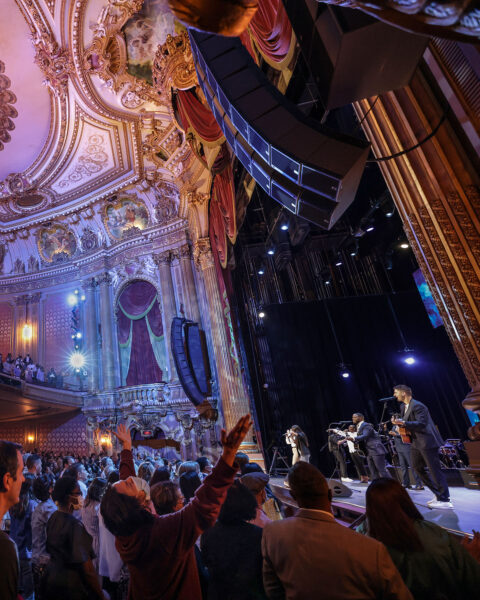 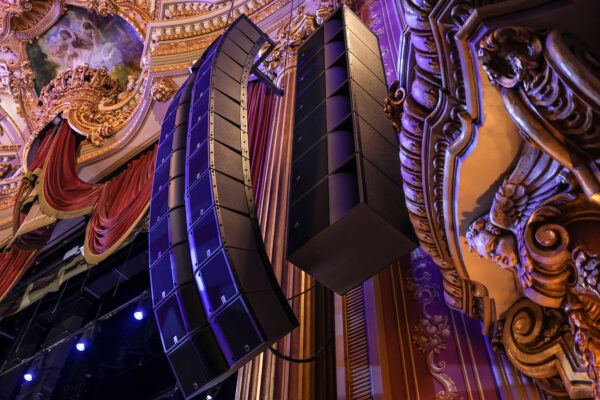