All Thursford Wants For Christmas Is Two DiGiCos

Eighty performances in two months. Audiences totalling over 100,000. A cast of more than 150. A creative team of almost 30. A stage more than 130ft wide. A Wurlitzer. A carousel. A non-stop extravaganza of music, dance, humour and variety. This is the amazing spectacle that is the Thursford Christmas Spectacular!

Eighty performances in two months. Audiences totalling over 100,000. A cast of more than 150. A creative team of almost 30. A stage more than 130ft wide. A Wurlitzer. A carousel. A non-stop extravaganza of music, dance, humour and variety. This is the amazing spectacle that is the Thursford Christmas Spectacular!

Founded by George Cushing in the 1970s, the Thursford Collection in North Norfolk houses an extensive collection of steam engines, organs and fairground attractions. Three generations of the Cushing family have been involved with the Collection and it was John, son of George, who decided to put on a little carol concert for the local area. The concert grew over the years and forty-two years later, with John as producer, director and CEO and sons George and Charlie also heavily involved, the Thursford Spectacular has grown into one of the most popular Christmas events in the country.

Thursford’s existing mixing consoles had served them well, but they were starting to creak under the strain of the show’s ever-expanding requirements: there are 70 channels of Shure radio systems accommodate the dynamic nature of the show, including 28 head mics, 10 handheld transmitters, and 26 body packs for the orchestral players who can carry their instruments around the stage, and front of house sound reinforcement is delivered by a substantial Meyer system, along with RCF surround loudspeakers for delivering reverb and effects.

Head of sound, Kieran Lowe was well aware that the time to upgrade was due and looked to the power of DiGiCo. In consultation with DiGiCo’s Tim Shaxson and Dave Bigg, they specified the flagship SD7T for front of house, an SDTen with SD10-RE for monitoring duties, three SD-Racks loaded with 32bit I/O cards to provide for 166 input channels and 52 output channels, along with an Orange Box with DMI optics / DMI MADI for virtual soundcheck (every show is also recorded and, after the run of shows has finished, a CD is produced for the audience to buy) all on an Optocore loop for full redundancy, with OpticalCON connectors.

“Our SD-Racks are full to the brim,” says Kieran, who has been working with Thursford for the past 11 years.

“For the past 10 years we had a different brand of console. They’ve been great, but as the show has progressively grown each year, they’d become increasingly limiting. We needed a system that was more powerful, more integrated, reliable and up to date. For our monitor system, we have the SDTen programmed with over 60 Snapshots and running 36 mixes for our Aviom systems, foldback loudspeakers, IEMs and headphone mixes for our backstage vocal booth. This booth is really useful for additional singers and string players when the choreography is demanding for our performers who are huffing and puffing onstage.

“The SDTen looks and feels light-years ahead of the old monitor console. We now have all input channels available at this console, so there’s no compromise anymore. We’ve got an SD-Rack located at front of house feeding our seven XTAs which manage the Meyer system and two full SD-Racks backstage, providing outputs for our monitor system and inputs for our 70 radio channels and wired microphones for instruments such as the drum set, tuned percussion, keyboards, the double bass, cellos and other static instruments such as the Wurlitzer.”

By the way, the Wurlitzer was rescued from the Paramount Theatre in Leeds and has 1,339 pipes and is the fourth-largest in Europe. It’s quite a sight to see and has its own humidity control to keep it from drying out.

“We use 10 mics to capture the organ,” explains Mark Rogers, who mixes front of house, alternating with Mike Cox and Kieran. “There are foot pedals controlled by the player from the organ console that widen and close slats in the wall here to make it louder and quieter, but because of all the stuff that’s in front of it, it does tend to dampen it down a bit so we’ve mic’d it with two microphones outside and eight inside.”

“One great thing that I have noticed since we installed the DiGiCo kit is that, although the consoles can do a great deal more than our previous ones, the physical system as a whole has been hugely simplified,” Kieran smiles. “It’s now much easier to use and we’ve got rid of masses of copper cabling, ageing multicores and active splitters.

“We have allowed for a few spare cards and a MADIpod. We’re literally in the middle of nowhere and can’t exactly nip down the road to hire in spare kit. DiGiCo’s built-in redundancy was another really important thing for me. If we do have problems, we know that there are redundant systems in place all the time. With minimal fuss and the touch of a button we can be running on alternative systems.”

The SD7T, which handles 166 input channels, has been a revelation for the team, delivering more flexibility and eliminating limitations.

“With the nature of this show there is a lot of live mixing,” says Mark. “We have got a huge cast and it changes every day. Because there are so many variables, John rightly wants consistency. So, to get the show the same you have to mix it differently every time and I’m sitting with my hands on the SD7 all the time, adjusting things.”

“The DiGiCo system is fantastic,” adds Kieran. “The very first time I plugged all the Optocore systems in I cranked the fader up and I could immediately hear the clarity and a complete difference in the PA. The combination of 32-bit in and output cards has also contributed to this, along with the system’s simplicity, meaning way fewer pieces of hardware in every signal path. Everything is much, much cleaner.”

Ian Savage, Ed Mackay and Ciaran Moriarty, tucked away backstage in RF world, fit wireless microphone system to singers and players over 10,000 times during the run of shows throughout November and December. They use Shure Wireless Workbench to manage their daily RF diagnostics.

“Historically, it was a nightmare trying to find a noisy fault, a splat, a loss of RF or an audio peak during the show,” continues Kieran. “With all these miniature mics live in the PA at any one time we inevitably get the odd failure, with potential audio peaks disrupting the show, our performers on stage and especially players with IEMs.

“But now, using our DiGiCo systems and Shure’s Wireless Workbench, often these faults are efficiently spotted and dealt with by our fantastic RF team backstage before the culprit has loaded on stage. The technology is so much better now, and we have it at our fingertips.”

“This show is very, very, different to any other show and the SD7T is brilliant for it,” adds Mark.

“Sometimes I pinch myself when I remember back to last year,” says Kieran. “The desk we had before was reliable and it did a great job for 10 years, but we’re way ahead of that with DiGiCo for the next 10 years. The DiGiCo team has been fantastic and we’re delighted with the whole experience. We even got a DiGiCo Christmas jumper each!”

So, with DiGiCo in control this year, Thursford’s Christmas is truly spectacular.

"The desk we had before was reliable and it did a great job for 10 years, but we’re way ahead of that with DiGiCo for the next 10 years. The DiGiCo team has been fantastic and we’re delighted with the whole experience. We even got a DiGiCo Christmas jumper each!" 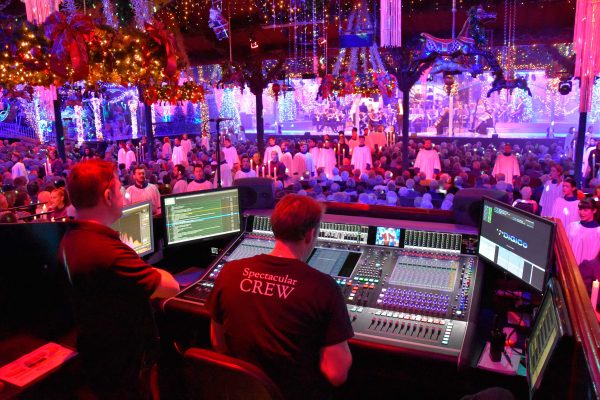 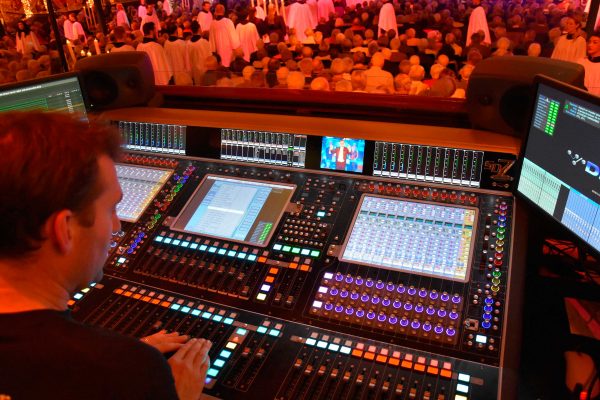 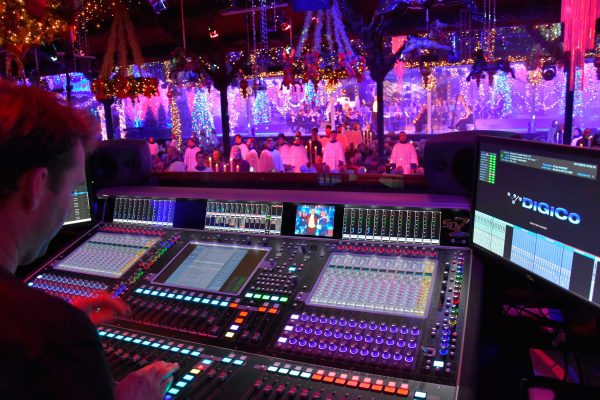